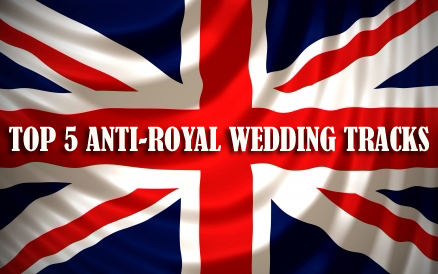 Everywhere you turn at the moment your eyes simply can’t hide from the hoards of royal wedding memorabilia; Plates, mugs, badges, bumper stickers, keyrings, pencil sharpeners, pencils, pencil cases, suit cases, suits, trousers, shirts, football shirts, football boots (sorry got a bit carried away there), all depicting the bland faces of prince William and Kate Middle-of-the-road. Why – with all the coverage that the wedding is already generating from TV, radio, newspapers, magazines, flyers, town criers, carrier pigeons (I’ll stop now) – would I want to mop up the last traces of gravy from my Sunday roast to reveal the face of a sickeningly clean cut prince and some girl staring back at me.

So come the 29th April, the date in which they will ride the awkward ‘speak now or forever hold your peace’ moment and proceed to get drunk at the reception, which necessitates the return of Harry’s Nazi costume and a best man speech documenting Williams first sexual experience in front of a drunken Queen Elizabeth II, I will not be celebrating it.

I will however be celebrating National Persian Gulf Day, International Dance Day, the 9th day of the Ridvan festival, the 95th anniversary of the end of the Easter Rising and the birthday of tennis legend Andre Agassi. On top of this I will be listening to the following Anti-Royalist songs to give me a glimmer of hope that there is more to British culture than a certain pompous family.

CRASS – BIG A LITTLE a

I think it’s fair to say punk rockers Crass weren’t big fans of religion, government or the royal family. Here they combine all three in a huge two fingers to the establishment. The stand out lyric being their message from the Queen:

SEX PISTOLS – GOD SAVE THE QUEEN

This list wouldn’t be complete without a contribution from Mr Rotten, you don’t need me to tell you the Sex Pistol’s influence on anarcho-punk. From the moment he stepped onto the Lesser Free Trade Hall stage shouting his sentiments to the future of British music to the moment he stuck it to mainstream butter by advertising Countrylife, there is no questioning his dedication to the anarchic cause. A song disclaiming the Queens status as a human being peaking at number two in the charts, genius.

THE SMITHS – THE QUEEN IS DEAD

A sample of Take Me Back to Dear Old Blighty, thunderous drums and mesmerising guitar courtesy of Johnny Marr provide the perfect backdrop for Morrissey to imagine ‘her very lowness with her head in a sling’ or Charles on the cover of the Daily Mail ‘dressed in his mothers bridal veil’. The peak of the tracks comic imagery comes with Morrissey’s witty exchange with her majesty.

‘So, I broke into the palace
With a sponge and a rusty spanner
She said: “Eh, I know you, and you cannot sing”
I said: “That’s nothing, you should hear me play piano”’

This Generation Terrorists era B-side is a huge stab at the royal family and the imbalance of British society at the time. It contains all the passion and confidence of early Manics records and is a good one to dig up every time you hear about how special the royal wedding is going to be. The lyrics touch on the futility of attracting tourist to the gates of the palace when we don’t know where the money is going. A real fist clencher and a commemorative plate smashing anthem.

A 53 second track from their debut album politely asking for the monarch to step down. There is nothing more to this track than John Squire’s beautiful arpeggios and Ian Brown’s soft vocals as he states ‘I’ll not rest till she’s lost her throne’. If punk was the bully beating up kids for their dinner money, this track is Oliver innocently asking for more.

Kunt and the Gang is back with the biggest dig at the Royal Wedding ever heard so take note as it could cost you your shit job if played at work. Certainly not safe for work and unlikely to be number one this Sunday but get in. Fucksticks is utterly ridiculous but well worthy of a bonus track! Screw you Royals. – Z-Ed