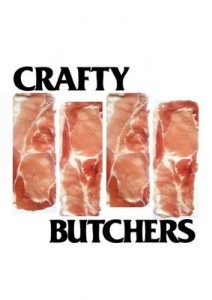 The Crafty Butchers’ ode to being a chicken is two minutes of punky riffs accompanying some genius lyrics from the point of view of a chicken. Yes, a chicken. The three-piece have successfully captured a rather gleeful chicken world view where the subject of the song is in fact looking forward to becoming a pie or other such delicacy.

This is a brilliantly rough-around-the-edges slab of rock and roll which you can imagine comes fully into its own in a live setting, although the band have to date only played one show so let’s hope there are more on the horizon! These guys clearly take their meat seriously, so perhaps not one for the vegetarians out there.

Has to be heard to be believed.

Just A Chicken by The Crafty Butchers