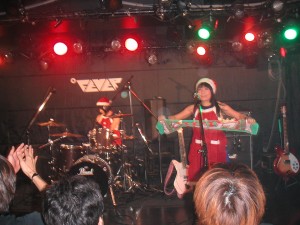 Shonen Knife’s singer/guitarist/main songwriter Naoko Yamano is chatting happily to the crowd; a crowd who, less than 10 minutes ago, were very shy and reserved, but are now grinning like loons and ready to pogo like there’s no tomorrow. Unfortunately, I can’t understand Japanese very well, but it’s clear from their fans’ reaction that Yamano’s band – 30 years strong and counting – are still very much loved by those in the know.

Famously the subject of a tribute album only eight years into their career, the Osaka trio’s appeal lies in their ear for a catchy tune, their bubblegum punk-pop sound, and their amusing obsession with the little delights of life. Tonight, everyone bounces around happily to the power-pop of ‘Banana Chips’ (an ode to the snack of the same name), the buzzsaw melody of ‘I Am A Cat’ and the gloriously jangly ‘Capybara’, all delivered in true Ramones-esque style. Twee? Maybe so, but in today’s troubled world, there’s nothing wrong with a bit of escapism now and then, and if ever there was a band that merited leaving your cynicism at the door and bouncing around with a silly smile on your face, then SK are that band.

Much like their younger compatriots Electric Eel Shock, it’s rare to see a band enjoy themselves so much onstage; with Yamano and bassist Ritsuko Taneda soloing away to squeals of delight from an energetic but very good-natured crowd. It feels more like a party than a gig; even more so when the girls return dressed in Santa Claus costumes for an encore of Ramones covers and some punked-up Christmas songs, with handclaps and harmonies in abundance.

On our way to the exit, we’re greeted by a golden retriever, whose friendly demeanour only increases our reluctance to leave. Shonen Knife may not be total unknowns, but they’ve always been something of a cult concern, and in this small west Tokyo club, it feels like we’ve been treated to a taste of Japan’s best cure for the winter blues.