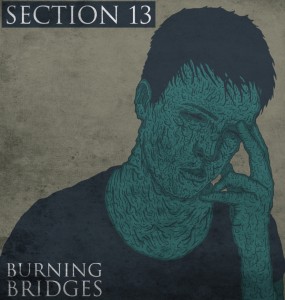 For a loosely termed musical genre that developed as a tougher edged take on first-wave Punk, ‘Hardcore’ has been subsequently sliced, diced, and generally misappropriated by a whole host of chancers, eager to put a credible spin on marketing their musical output, and even career aspirations. Gawd help us!

So let’s be clear, Section 13 are very much Hardcore as derived from the source, laying down 13 (what else!) bruising and whipped up blasts of anger driven music, with an attitude firmly rooted in Punk Rock. Singer Ian Murphy goes all the way back to mid-Eighties shining lights Visions of Change (from the then scene hotbed of Leamington Spa) and after time in the wilderness returned to action with S-13 a few years ago, “regrouped, reviewed, came back with strength renewed” – Hell yeah!

Burning Bridges is the band’s debut album and comes to a crunching finish a shade under 30minutes. You do the maths. This is super fresh sounding old time Hardcore, that’s screaming for a change, and banging its head against the wall. The lyrics are introspective, venting spite and frustration at personal failings and being disconnected with a world consumed by hate and division such as “I stand outside all those neat lines, not on the fence, not using that defence”.

It all adds up to fast and melodic Hardcore that keeps the true spirit alive, a reason why I am most certainly liking this album a lot! You won’t read about S-13 in glossy music magazines, they will never (ever) be Flavour of Month, endorsed by a sneaker company, or on a backpack sponsored tour. But they were never playing that dumb game in the first place. No shit, this is the real deal, and I cordially instruct you to go check it out pronto!