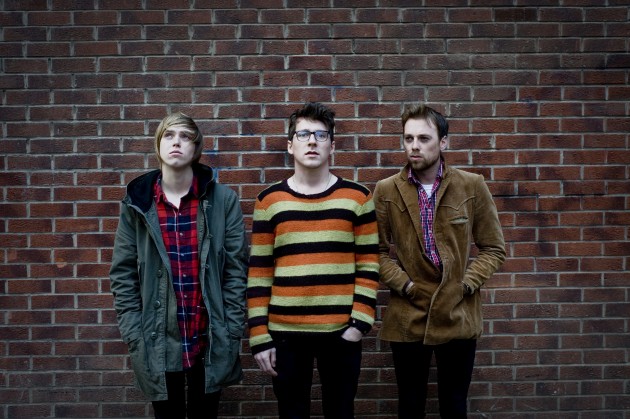 I remember the first time I saw The Xcerts. It was a cold and damp late summer night up in Glasgow. Having just moved there, and therefore knowing nothing about the Scottish music scene, I was truly happy and surprised to be watching them play in the crypt of a converted Church. So I set off for Soho, pumped and in an almost euphoric state, to see this trio blast their own brand of distorted punk-rock pop laced music into the faces of Londoners.

The first thing to mention is that the Borderline has never been the biggest venue, but tonight it is rammed, as you walk down the stairs you have to squeeze past people trying to get a view of the stage. On top of this it’s hot as hell, but there’s a real buzz in the air as we all wait for the band to walk on stage. All of a sudden they appear and the music starts.

Now this is the part where I’m suppose to tell you how much I loved the show, and how it was ‘THE BEST GIG EVER!’, but it wasn’t. The sound at the start of the set was shocking, and when I say shocking I mean really crap, as you can hardly hear the guitar or vocals beyond a wall of distortion. Thankfully after about three songs the problems with the P.A. is sorted, however, although the majority of the audience seems to be really loving this play-through of their 2011 Scatterbrain album, I’m not blown away at all. I loved their first album, 2009’s ‘In The Cold Wind We Smile’, and I have to admit that I’m not the biggest fan of ‘Scatterbrain’, but I really thought it would gain a whole new dimension live. It didn’t really have that effect. While you can’t really say it’s a bad album, in my opinion, it’s just not as good as their debut effort.

The crowd are ready enough to sing-along towards the end and the band thank everyone for their enthusiasm. You can really tell it means a lot to them to see an audience who has embraced their music and a gig format such as this completely, but then it’s all over as they round up the set up after about 45 minutes and there’s not a trace of any earlier material, just one older track could have done the job.

You can’t fault the band’s musicianship, they played exactly the same way as the very first time I saw them in Glasgow, but the poor sound at the venue added to the lack of a truly gob-smacking set list made this, very sadly, just another ‘good but not great’ gig.

If you went and were new to the band, then I can appreciate you’re going to disagree entirely, but for anyone who’s seen them play live before this was not the best gig the boys have played.