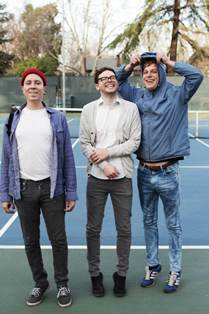 So Stressed hail from Sacramento and make the kind of ear stinging post-hardcore that demands playback at maximum volume for guaranteed bone crunch. The three-piece have recently hooked up with Honor Press, a brand new label founded by Meredith Graves of Perfect Pussy fame, for the release of their debut album, and ‘Apple Hill’ / ‘Merv King & The Phantoms’ is our first taste.

Fans of noise giants Metz and Pissed Jeans will find solace here, along with those who favour the scrappy racket of Greys and Bad Breeding too, as So Stressed kick out steaming jams riddled with angst, tension and set to blow.

Surprisingly, the trio are reportedly hell bent on perfection, and have a policy of immediately scrapping any song if one band member has the slightest doubt about its intensity. This mutual insistence on the perfect may come as a shocker context to their unhinged and explosive sound, but you can only admire a band who have spent over two years grafting in the studio to get their debut right, their way. Look out for So Stressed’s first album The Unlawful Trade of Greco-Roman Art due for release on May 25th.