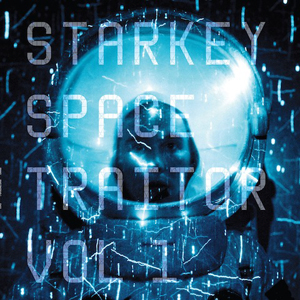 Starkey is always difficult to define with his innovative mix of grime, dubstep, hip hop and everything inbetween and with his new EP, Space Traitor – Vol. 1, he doesn’t make it any easier. Not that this is a bad thing, as opening track Robot Hands slams its way into the ether with his trademark heavy duty bass interspersed with moments of calm before the storm.

Playing With Fire sees no let-up with a crashing drum introducing the track, laying the foundations for  the crescendo of sound that follows, combining skittering hi-hats and empowering synths. The almost Hitchcockian film-score like strings of Holodeck again bleed into a bassline that demands full attention before showing his ability to switch styles with the much more relaxed Paradise with Anneka, who appeared on his album Ear Drums And Black Holes of this year.

Starkey’s production ends with the almost Joker-esque Lenses before unleashing a torrent of remixes from the likes of Ital Tek, Rudi Zygadlo [with a brilliantly understated remix of Paradise] and Egyptrixx amongst others. Fans of Starkey will lap this up and certainly there are tracks on here that would have lifted his album to higher levels. As ever, he is fresh and worth space on anyone’s iPod.