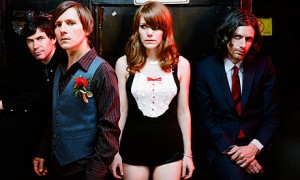 Rilo Kiley are no more.

Guitarist Blake Sennett announced the split in an interview saying that despite reports they were on hiatus, they would definitely not reunite. Jenny Lewis has been working on her Jenny and Jonny project whilst Sennett was recording with The Elected, with the later saying:

“I just felt like there was a lot of deception, disloyalty, greed and things I don’t really want to submit myself to. I had related that frustration to music.”

A compilation of unreleased tracks might make its way into the world in the not-too-distant future.