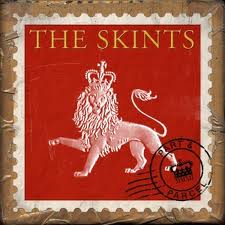 Four school friends from East London with a shared love of traditional ska, reggae and punk, The Skints delivered a great (and, alas, underrated) debut in 2010’s ‘Live, Breathe, Build, Believe’. ‘Part And Parcel’, though, is a record that won’t be so easily brushed aside – mainly because it’s just too damn good.

They band have come a long way in the last two years, now placing more emphasis on reggae and less on ska-punk. However, the gritty edges haven’t been smoothed over, and the delivery is still razor-sharp; witness singer/guitarist Joshua Waters Rudge’ dazzlingly fast flow on ‘Live East, Die Young’, a catchy yet downbeat tale of local folks who took a few wrong turnings in life and paid the price.

That said, ‘Part And Parcel’ is not all tales of troubled times. Co-vocalist/multi-instrumentalist Marcia Richards deservedly takes centre stage more often, lending her soulful tones to ‘Ring Ring’, a love song laden with tinkling piano and trebly, sctatchy guitar straight out of the ‘60s. Elsewhere, the sweet harmonies and choruses of ‘Lay You Down’ and ‘Can’t Take No More’ will lodge themselves in your head – and you’ll be grateful.

Just like Capdown and The King Blues before them, The Skints are the latest in a long line of great British bands providing a strong message for the mind and a beat for the feet. In particular, if ‘Rub-A-Dub (DoneKnow)’ doesn’t get you dancing, youd be well advised to check your pulse.

‘Part And Parcel’ may owe a lot of its inspiration to the best of Jamaican music, but this is unmistakeably a London record, and easily a contender for one of the best of 2012. The band will be doing a full UK tour in October, and will play several gigs /festivals/other bits n’ bobs in the meantime – check www.theskints.co.uk for more info.