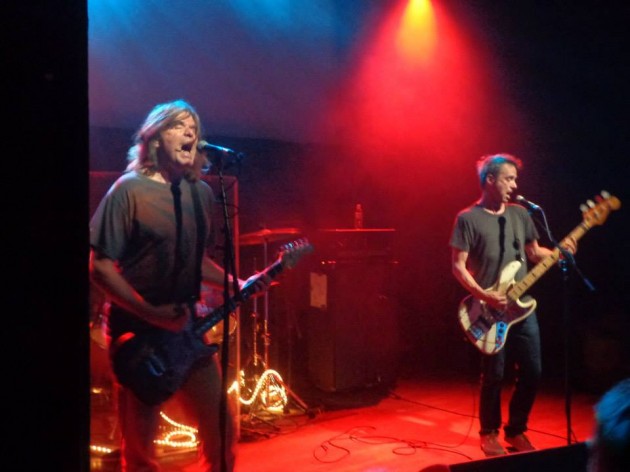 “We love Brighton. We love your winkles, cockles and eels,” laughs drummer Peter Prescott from behind the perspex screens that shield his drums from guitarist Roger Miller’s tinnitus (the band originally disbanded in 1983 because of this). Boston alternative music legends Mission Of Burma are in jovial moods tonight. It doesn’t matter to them that the venue is only half full for their performance, they are dead set on having fun and are still, all of these years down the line, so thrilled by the music they play. You can see it in their faces. This is the noise they live for and it’s not hard to see why.

Unlike so many of the bands born out of punk that are still playing, Mission Of Burma (and their UK contemporaries Wire) are one of the few to still be creating new music that stands proud, head and shoulders next to their classic early records. In fact, I would go as far to say that their latest album ‘Unsound’ is possibly even better than some of their early recordings; it forms a large chunk of tonight’s set and sits perfectly next to eighties Burma anthems played tonight such as ‘Academy Fight Song’ and ‘This Is Not A Photograph’. New songs such as ‘This Is Hi-Fi’, ‘Add In Unison’ and ‘7’s’ (sung by bassist Clint Conley) nail everything that is special about this band. Everything stems from drummer Pete Prescott. He plays in such a weird, off-beat individual style that his playing really anchors the root of Burma’s sound – Roger and Clint pin their guitars around his ever evolving rhythms. Yes, they are weird and discordant but the noise never compromises the melody or energy. Despite their quirks, Mission of Burma is still a balls out high-energy punk band kicking out the jams harder than most.

It doesn’t even matter that they leave the stage without playing their hit ‘That’s When I Reach For My Revolver’ – to them, it’s their ‘Smoke On The Water’ – the albatross around their necks. As good a song as it is, it’s not missed and Burma leave us with our ears ringing and our faces grinning. Please come back soon.