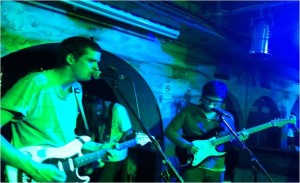 The DIY indie rock scene of the 1990s has experienced a slight revival over the past year in the UK. Both Male Bonding and Yuck’s opening album efforts have generally been well received in the British music press as well as across the pond in the U.S. London-via-Manchester four-piece Mazes are hoping for the same as they mimic their British compadres with debut album A Thousand Heys. The Shacklewell Arms in Dalston is the band’s final UK show before they embark on a full U.S. tour with White Denim.

Despite early hiccups with the venue’s experimental red lighting (yes, I’m as puzzled as you are) during the band’s opening couple of songs, Mazes’ set finally ignites with the infectious ‘Most Days’. Evident homages to Stephen Malkmus are clear with Jack Cooper’s fun and playful yells of “I never wanna get out of my bed, no way” in ‘No Way’.

This combined with alternative rock riffs from Jarin Tabata in the mould of Dinosaur Jr., The Lemonheads and Fountains of Wayne add substance to their sound and ensure that the quartet’s songs are not just exhausted Pavement pastiches.The small crowd remain in high spirits after ‘Bowie Knives’ which challenges DIY indie rock stereotypes with its organised structure, as a result the song boasts emphatic Weezer-like melody.

Inevitably, the group move towards power pop territory in ‘Surf Tag / Maths Tag’ with Cooper providing flashbacks of The Beatles entrance to JFK airport in 1964. The final song of the evening ‘Summer Hits or J+J Don’t Like’ is a rousing ending to a set from a band that was only making cassette recordings of their material two years ago. The DIY revivalists’ nostalgic farewell is proof that they are certainly well suited for bigger and better things, especially in college rock circles across the States.