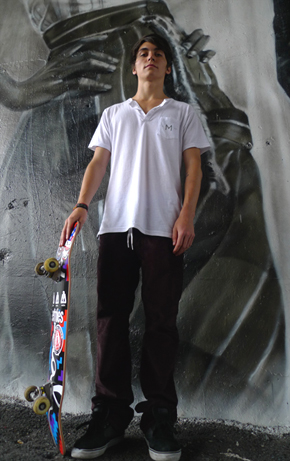 Every year, this guys turns up at our Crossfire events, rips beyond belief and leaves with a smile on his face at the end of the day with some free stuff. This has gone on now for about 4 years in a row, so we decided to check in with Manuel Lopez this month and find out exactly who he is.

Let’s kick this off with this slam that opens this edit of yourself and friends below, you took a good one there!

This happened when I went to Geneva with Josh Clarke to chill out with some friends and film. We went to this new spot that no one had skated. It was a flat hubba with 7 foot drop after. I went for a back 5-0 and it for a first try, it grinded alright. Then I went for a line to film and do a back 5-0 at the end. The only problem was that there was a big chip in the ledge that I hooked up on. So I went flying and landed on my arm, ribs and face and was winded! When I was in the air, it felt like this has already happened and I could have sworn I dreamt about it. My chin didn’t stop bleeding, but after a day it closed up on its own and was gone within 2 weeks. It was definitely the gnarliest slam I have ever taken!

How often do you bail out of tricks in that fashion, are you foot to the pedal in general, or are you a bit more concise about your approach to tricks at speed?

I take a lot of nasty slams unfortunately, but never bad enough to break something. I have been really lucky so far. I’m not afraid of going fast at all though. I knew I was going too slow, but for some reason I went for it anyway. Oh, and I’m learning to do the signature Daryl Dominguez Ninja Roll out of every bail to bounce back up without getting hurt too!

You have always showed up at the Crossfire events and got amongst it in the pro jam. If you were to create your own skate event, what would you roll out for everyone?

I would organise a best trick on the hip to hubba because no one ever skates that. Or, I would create a new obstacle that no one has ever seen or skated before- it would have to be something gnarly like a big ass driveway gap into a handrail or hubba. It would be good to see a best trick event at the Ladbroke grove 10-set or see who can get the best line at St. Paul’s Nightrider 6 and 5 set – obviously I would skate in it too!

So, you’re definitely not one of those skaters who think that comps and jams suck then?

Nah…I like to participate, but I don’t care if I win or lose. I love the hype you get and it’s an opportunity to try crazy shit.

Should Bay Sixty 6 Skatepark close down to become a garden centre?

What does that skatepark bring to your local London skate community?

Well, it’s the place where I met other skaters that have sponsors and skaters that don’t and it’s a fun place to chill and try new stuff. I love cruising around in that park and having a session on certain parts of the park.

What about tunes, what music stokes you?

I’m a really big Biggie fan so all his music and anything that sets the mood for the trick you’re trying. Edward Sharpe and the Magnetic Zeros, Kid Cudi, Jimi Hendrix, AC/DC – just anything that pumps me up. I love listening to chilled out music too, but not when I’m skating. It all depends on my mood really. I’ll listen and give a chance to just about anything no matter what genre and if I like it I will put that shit on my iPod and jam out.

I have never understood people who skate and listen to music as I believe that grinding andsliding is part of the music of skateboarding, do you miss it when you skate with your cans on?

I only listen to music in skate parks and when I’m filming a line, but when I’m going for something bigger I need to concentrate more. I don’t use headphones that block out the sound, so I can hear everything. I hate it when I can’t hear the pop of my board.

So, you have traveled a fair bit. How many countries have you lived in?

I’ve lived in 4 different countries, skated in 3. I was born and raised in Canada then I moved to Hong Kong for 2 years. That’s where I started skating. Then I lived in Geneva, Switzerland for 4 years- where skateboarding really happened for me. I then moved to London and fell in love with the skate scene here so I’ve got no plans to go anywhere anytime soon.

London can certainly have that affect on people. So what happens with sponsors if you travel so much?

My sponsors at the moment are based in Geneva. Right now I’m riding for a skate shop called Doodah, it’s the biggest skateshop in Switzerland and I’ve been on them since I was 15, so for over 3 years now. I also ride for Matix Switzerland and I get flowed Thunder Trucks and Spitfire Wheels. I used to ride for Adio but then the whole team went down the drain. The European team got kicked a lot sooner than the pro team, so I had my last order last July.

So how does skating in London compare to skating in the other places you’ve lived?

Well, I came from 2 places that had the most perfect and cleanest spots. Hong Kong is all marble. Security can be tight there but at some places they don’t really care and the pavements are really smooth in Geneva. There are a couple of grimy spots but most of them are absolutely perfect. Nobody hassles you for skating- it’s one of the best places in the world to skate, but nobody knows it.

London has a larger variety of spots. Especially a lot of stairs, which I need to work on haha! There are not that many handrails, and the ones that are here are pretty gnarly so it feels really good when you get a trick on them. It sucks that the most perfect spots have the most tight security in the city, like Liverpool St and Cabot Square in Canary Wharf. 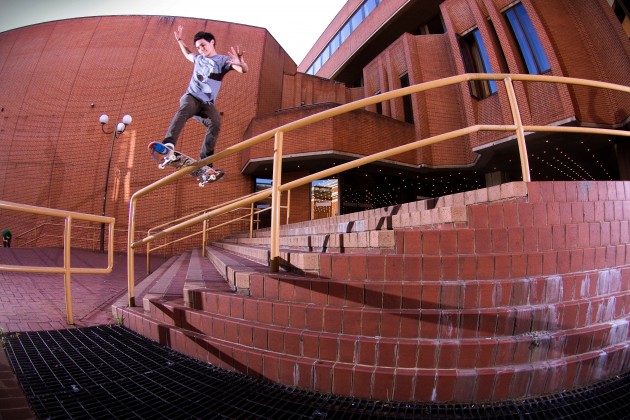 By the looks of what people have seen of you online you have built up a pretty tight crew. Who do you usually skate with on a weekly basis?

I usually skate with Daryl Dominguez, Evan Knight, Jamal Bendriss and of course Josh Clarke is always around to film it all. Whenever I go back to Geneva (which is usually every couple of months) I skate with the homies over there.

So how long have you been working on this Fresh Blood?

I was asked to do it about a month ago but I included a bit of old footage which I filmed over the summer holidays. One of the days I was out with a photographer so I banged out 3 NBD’s in about 2 hours which gave me the confidence to front smith that High Street Kensington rail in 3 tries.

What’s the story behind that?

I’d seen the rail before in footy, so warmed up on the 8 stair rail on the other side (that isn’t a bust) and got a front board on that. As soon as I landed that, we took all the equipment straight to the 12 and when I got up there I didn’t realize how high the rail really was, so I went for it and jumped and ran onto the rail. Then the second try I popped too much and went into lip slide and went straight to my heels, but I had to do it that day or I wouldn’t have done it on another.

When I was up there the security guard came out and starting tripping out, shouting at me ‘Don’t go! I’m calling the Police!”, so I just told him ‘No, I got this!’ – put down my board, rolled up to it, popped and locked into the smith pretty early in the rail and rolled away. There were a bunch of pedestrians watching so when I landed it they all congratulated me and we just grabbed the equipment and got the hell out of there! 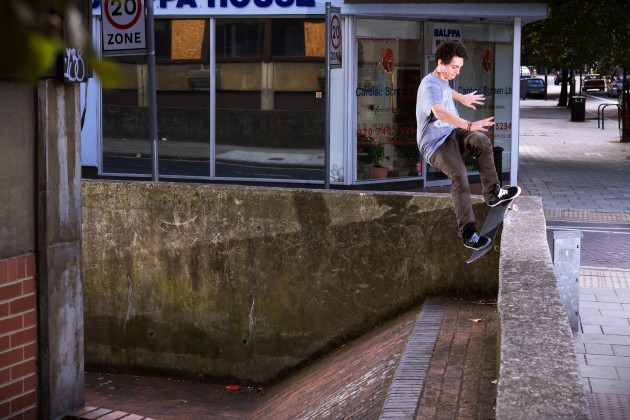 You just won a best trick comp recently at an event that Gonz was at, stoked on that?

Yeah. I just went down to watch, not compete, and then there was a best trick contest for everyone to participate in. I waited till the last 5 min and they gave everyone 5 tries and still no one landed anything on the main obstacle, so on my 3rd try I pulled away with a 5-0 Varial Flip out. To be honest I was just lucky that no one landed anything. Haha!

What came in the package, a tent on the beach?!

Yeah, 3 nights! I stayed in a hotel and I got a pair of shoes and some clothes. The trip went really well and it was a lot of fun because my girlfriend came along but I wasn’t skating too good and just kept eating shit and taking out my shins and knees and ankles! I was at the Amsterdam AM contest about a week before Barcelona and met the Minor Media guys from the Berrics, Steven Webb and Clint Peterson, so we all went out filming together when we arrived in Barcelona, then flew back to Geneva for some more filming and visit friends. Great trip.

Knowing the street riots in London are a major talking point this week, what do you think of the British youth uprising?

The riots are complete bullshit! Haha! People think that skaters are scum and up to no good- look at these hooligans! It has just a reason to steal stuff and get away with it while the Police stand there and do nothing!

Have you seen this type of reaction in the other countries you have lived in?

Yeah, this stuff happens all the time. It’s the second time I have been in the City where it’s kicking off, but it has never lasted this long.

If you were the Prime Minister, how would you tackle the problem the Police have on their hands this week?

Honestly, the Police need to start growing some balls and take these kids out because they are now hurting innocent people and ruining businesses and peoples homes. I’m not saying kill them of course, but they need to take them out and put them all behind bars! If this keeps going on more people are going to keep getting hurt and lose what they have worked hard for.

let’s wrap this up. What plans do you have for the future?

I finished school at the end of May so i’m now able to really focus on skateboarding. I hope to get hooked up in the UK and transfer into the Matix UK team from the Swiss team, because I think that it will definitely push me to progress even more. I’m working on 2 video parts at the moment. One of them with the company Cesarprod and the other, an independent film that Josh has just started working on that Daryl Dominguez, Kyron Davis, Luka Pinto, and many more will be in. Look out for that soon.

I’d like to give a shout out to all the homies and the chickas. You know who you are ;)