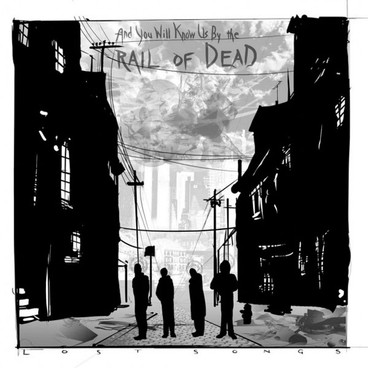 And You Will Know Us By The Trail Of Dead are arguably the most consistent alternative rock band of all time. Formed back in 1995, the two members that formed the band have never delivered an album that you can fob off. All of their eight studio projects have delivered their unique sound at the highest level mixing apocolyptic guitar punk with rock and roll at the highest level and then stripping it down to melodic undertones big enough to fill a desert.

This endless quest that Jason Reece and Conrad Keely have been on since meeting in Hawaii all those years ago, through non-stop touring, smashing equiptment and giving their all at every show brings us to today’s unveiling of their new video for ‘Lost Songs‘. It was filmed over six weeks on three continents in nearly twenty countries proving just how much this band put into their quest to share their music. It’s the title track from their new album featuring two minutes of rolling drums and lost souls and even though it may not be the strongest song on the album, it’s a perfect introduction before hearing the mammoth ‘Catatonic’ that you can hear below.

The record was dedicated to Pussy Riot when released last year, pick it up here and support this band as they have supported our ears superbly for years.