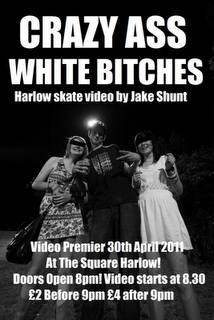 After some hard graft filming and editing sections from the local crew of Essex and beyond Jake ‘Shunt’ Martinelli is finally about to drop his Harlow scene video this month.

Crazy Ass White Bitches will premiere at The Square Harlow on Saturday 30th April after a session planned during the day at Harlow’s concrete paradise.

Guests should expect doors to be open at 8pm, get ready to find £2 to get in before 9pm and £4 after 9pm. DJ Trax and Monk will be dropping a mix of hip hop, old skool, d&b, dubstep plus there’s a d&b live drum set planned on the night too.