Funeral For A Friend
The Relentless Garage, London
18th February 2013 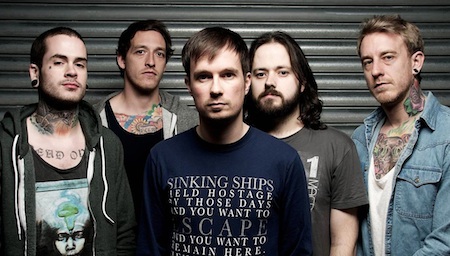 It’s a cold Monday evening and London’s Relentless Garage venue is graced with the presence of Funeral For a Friend. A somewhat intimate venue for these guys, who are no stranger to filling Brixton Academy and the like. The post-hardcore band have had a good, solid last ten years, enjoying major label success with ‘Hours and Tales Don’t Tell Themselves’ to taking a more indie route with the last few albums including the new album ‘Conduit’ which hit the shelves earlier this year.

The band have had a varied sound over the years, and ‘Conduit’ takes a step backwards, going back to their post-hardcore roots which isn’t a problem at all at the Garage because the atmosphere is as electric from the get go, to the ballad at the end. Singer, Matthew Davies greets the audience and asks if anyone had attended the matinee show in Kingston earlier in the day, to which half the crowd cheer. Pretty interesting, doing two shows in a day, and even more interesting for the lucky people who went to both!

The crowd, and myself, I have to say, were hit with a blast of nostalgia as they started the night off with ‘She Drove Me To Daytime Television’. Having had a look around, it looked as though pretty much everyone at The Garage were probably in their teens when FFAF’s debut ‘Casually Dressed & Deep in Conversation’ was released, so this song was a perfect opener, taking us all back to our teenage years jumping around in a venue probably as intimate at this one. Davies introduced most of the set with a meaningful description and insight into what each track means to them as a band, the politics, the friendships, and the positive messages.

The diverse setlist was action packed. They chose to play some of their heavier songs, which fueled the mosh pit and left everyone in a sweaty state. But the evening was gracefully brought to an end with the song ‘History’, which Matt explains is about the 1980s miners strike in Wales and the lack of determination and faith from the government and what the country had to go through. The evening ended with all the support bands on the stage, arm in arm singing the chorus to ‘History’, along with the sold out crowed in the Garage. A great way to end a fantastic evening.