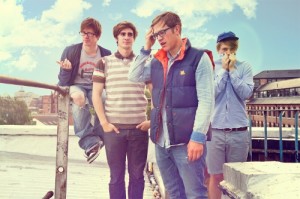 Swound! have announced the details of their debut album.

Into The Sea will be released through their own label, The Grelmin Corporation, on March 5th. The package will come with a DVD that includes a documentary of the recording of the album called Whatever Happened, Happened.

The album comes hot on the heels of the band supporting Electric Six in the UK and Europe and you can get an idea of the album’s sound by watching the video for Big Trouble below.