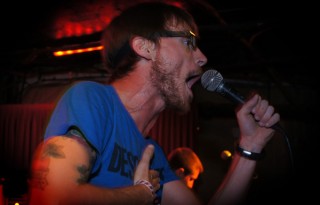 POLAR BEAR CLUB
Into It. Over It.
The Arteries
The Borderline, London
31st August 2012

As the opening band, The Arteries finish their hardcore and clear up all the gear, a bearded man emerges begins to sets up, checks if everything’s in working order and sits on his stool addressing the audience. The man is Into it. Over it, the sole operation of Evan Thomas. The first thing he says is, “So how many of you know I’m actually an acoustic act?”. Personally it comes as a surprise as the album is raging pop-punk. Its soon revealed that he records everything but tours as a single unit, just one man and his guitar. It was a tad strange I must admit, most of the other newbies probably felt the same. A hardcore band just left the stage and the crowd in a sweaty state, the headline act are gonna go mental, yet there’s an acoustic act sandwiched between it all?

Those apprehensive in the audience were quickly converted. Evan charged through his set, with such energy and passion as though he was fronting a full band. You could feel his passion, every song he had was attached with some kind of emotional story with the crowd are left to immerse themselves in the song as he crashed through it. Into It. Over It. Are a different kind of acoustic act, this guy was shredding and singing along with such energy that he struggled to sit still on the stool! The Arteries didn’t take the mosh pits with them, even Evan kept the crowd going.

You can always tell when the headline act grace the stage. Always. The atmosphere shifts, the crowd start to roar and everyone’s ready to tear the place apart. And of course, the same was experienced at the Borderline. Tonight is Polar Bear Club’s night, they own the this tiny basement of a venue in heart of London.

Borderline couldn’t have been a better choice of venue. Its as intimate as they come, with fans climbing onto shoulders and making their way onto the actual stage, shaking vocalist Jim Sandt’s hand whilst he’s singing, and then taking a platform dive straight back into the pool of people below.

Polar Bear Club powered through a varied set list, mixing classics from ‘Sometimes Things Just Disappear’, the epic, ‘Chasing Hamburg’ to their latest efforts from ‘Clash Battle Guilt Pride’. Whatever the song played on the night, it was received with a roar of an applause and continued stage dive action.

The band finished with the fan favorite ‘Living Saints’ and left for the back room. The crowd then started to sing the ballad, ‘Drifting Thing’. Everyone in the room, shouts as loud as they can to each word from start to finish. A call for an encore doesn’t get better than that!

So low and behold, Jimmy turns up on stage, quickly mentions that their current guitarist is a fill in and he might not know the song, to which a fan fumbles onto the stage and says if he could have a go. He introduces himself, Toby. Toby straps on the guitar, strums an a chord and the crowd erupt. He composes himself and is told, “3 strikes and you’re out kid!”, No pressure right?!

A few miss timings here and there, but the rest is perfect. You have to give the sweaty teenager credit, he’s on stage performing to a sold out crowd! Toby pulled through, Polar Bear Club loved it as did the crowd. This was clearly a stand out show for 2012 so far.