Skateboarding has a great quality to it which is innovation and change. Why it doesn’t compare to most sports is because it doesn’t have any rules or governing bodies that dictate winners and losers and classify everybody into leader boards and leagues. Well, actually there is some of that in skateboarding but it’s best left ignored. Anyway, what I’m trying to say is that skaters will naturally progress and this progression moves in tangents. At one end you’ll have the simple but gnarly skaters, whilst at another you’ll have the technical wizards and in between everything you have style. Older generations have always been aware that times were a-changing but I think we can safely say that times have changed but only for the better.

Element have been supporting European skateboarding for quite a while now and even if the riders from the old continent don’t necessarily have their names screened onto the decks they ride, their actions speak louder than the words the much sought after vinyl transfers could provide. Nassim Guammaz, Karsten Kleppan, Ross McGouran, Madars Apse, Phil Zwijsen, Michael Mackrodt, Jarne Verbruggen, Ruben Rodrigues and Guillaume Mocquin are all great skaters. You won’t be disappointed by what you see in their new feature length web video ‘Hold it Down‘. 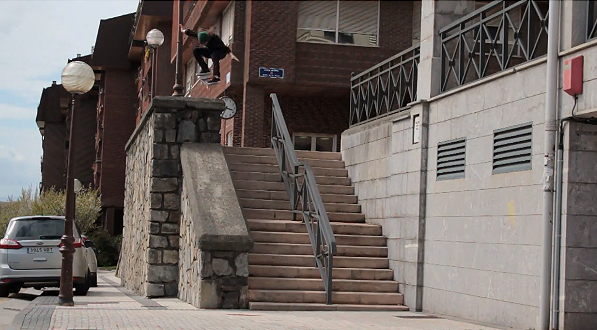 Here are a few reasons why the guys in this video are worth 24 minutes of your attention deficit disordered lives:

Karsten Klappens manages to take every single spot that could have had real potential and makes it a reality. Example: that curved ledge would be great to skate but there are two great walls stick out at either end. No problem for Karsten, he’ll just pop over and pop right out.

Ross McGouran (above) is a very gnarly pint size bastard who’s not afraid to fling himself far and wide in the pursuit of happiness.

Madars Apse and Phil Zwijsen share a part that combines Madars’ laid back approach to Phil’s. Jarne Verbruggen is a perfect example of today’s generation that can annihilate anything that sits in their path. Big transfers, a bit of ledge flippery and applying old tricks to new heights makes Jarne really fun to watch. 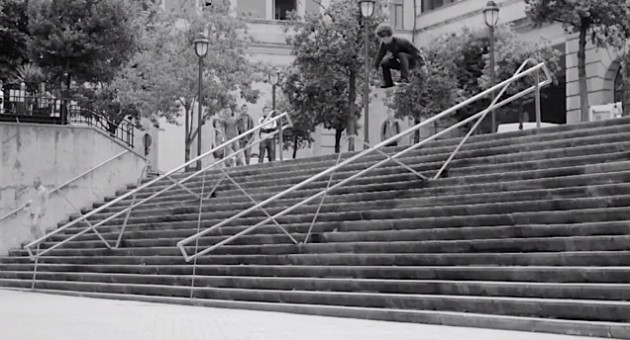 Nassim Guammaz (above) definitely chomps more than a fair share of rails in his part but when you see how easy he makes it look, you’ll be wondering why you don’t have a go yourself.

Check the credits for a straight and simple thanks to Mark Gonzales, John Cardiel and Pontus Alv. That list might sound way too easy command street cred among viewers, but when you see the talent and approach a lot of the skaters have you can see that those three legends are the real inspiration and thankfully so.