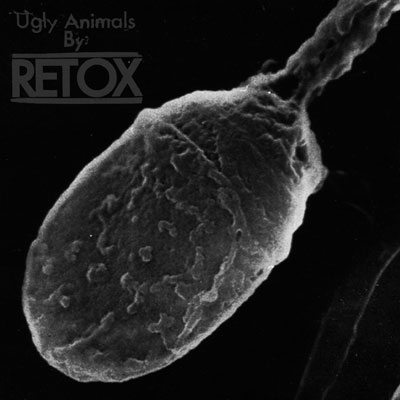 Climbing out of those skin tight nylon body suits and into yet another punk vehicle, The Locust’s Justin Pearson and Gabe Serbain have been making waves in the hardcore scene with their new band; Retox. Joined by Michael Crain and Thor Dickey on guitar and bass respectively, Retox are a more straight-forward band than we’re perhaps used to from Pearson, but if anything it only goes to make this his most focussed and exciting venture in years.

With a self titled EP already under their belts, Ugly Animals is the band’s debut full length, although calling it that is arguably manipulating the facts. What we have here are a blistering eleven songs in thirteen minutes, tearing through your system with all the energy and swagger of their live show. It’s always a difficult task to capture this kind of riotous enthusiasm on record, but this brisk collection will have you reaching for the play button as soon its run through its modest duration.

The LP has something of Head Wound City feel to it, with Serbian behind the kit again delivering a controlled if still exhilarating performance. While the hooks may be somewhat difficult to pick out at first, with repeated listens this at first record really starts to take its pointed shape. Clocking in at under 15 minutes you’d be a fool not to check out Ugly Animals, which, for our money, is one of the essential hardcore releases of 2011.