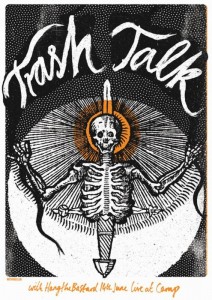 It’s three hours before show time and a group of teenage Trash Talk fans surround the band outside CAMP basement. The Promotion around tonight’s show had stated the event would be 16+, yet still a group of valid ticket holders have been refused entry despite carrying ID proving, in many cases, their age of 16 or 17 years old. While they helplessly plead their case to the venue’s security, their cause is a lost one, and there will be no Trash Talk for these kids tonight. The band apologise and spend their time pre-show hanging out with those refused entry, even bringing out posters and merch as way of consolation.

“First of all I want to say thanks to tonight’s promoters for booking the show,” says breathless frontman Lee Spielman, just a few songs in from front of stage. “But I also want to say fuck this venue…” before launching into a tirade against its owners and dedicating the next song to those who didn’t make it in.

As ever with Trash Talk shows the energy inside the venue is ramped from the start, and if anything the admission problems have only added to the intensity. Beginning as usual with the sludgy, almost apocalyptic opener Hash Wednesday from their most recent album Eyes and Nines, it doesn’t take a minute before the crowd are leaping all about the place. Amongst the bodies flying around the room Shawn Crahan (Clown from Slipknot) is spotted jumping off the stage into the now frenzied crowd. In spite of the chaos, though, the band is underpinned by the dependable, almost mechanical rhythm section of drummer Sam Bosson, flanked by guitarist Garrett Stevenson and bassist Spencer Pollard.

The band run through the highlights from Eyes and Nines as well as older live favourites including Walking Disease and Sacramento is Dead, the latter of which sees a circle pit erupt around a Spielman who is crouched in the middle of the venue’s floor. There’s also the addition of a new song to the band’s set, hinting at promising things on the horizon for their recently recorded new record. Let’s hope these are joined by one or two more when the band returns to play Hevy Festival in August.

Elsewhere its business as usual for Trash Talk, who produce another blistering 45 minutes of breathtaking hardcore. The band’s reputation now precedes them as being one of the most exciting live bands around, and as if that even needs proving, tonight is no different.