Photos and thanks to: Kalle Pajamaa

When we announced the news that Finnish punk band Pertti Kurikan Nimipäivät were chosen to participate in this year’s Eurovision Song Contest, the news spread like wildfire. Why? Because PKN are one of the hardest working bands out there, living a dream playing punk rock to underground crowds, whilst also living with their own learning disabilities. The support for them is massive.

On February 7th a national vote will take place on Finnish TV to find the artist their country wants to front the competition. It’s a very different place from playing punk rock venues with the likes of their UK mates Hard Skin who we saw play in London last October, but they need your vote to get through.

Regardless of our British ties, we would love to see Pertti Kurikan Nimipäivät go all the way, so if you are reading this, get right behind them and spread the word as far as you can!

If PKN are new to your radar, some of the band knew each other from when they were younger, some of them met in working in the same culture workshop. Together they work daily with radio shows, making music and other culture following the success of their amazing film ‘The Punk Syndrome’ – it’s a phenomenal story, go scout it out.

Who would have thought that the journey would take you to Eurovision! Are you excited or dreading it?

Toni: Yes I am excited.

Kari: I am excited because it’s a once in a lifetime experience.

How did you become involved in it? It was definitely the biggest surprise of all time.

Kari: Pertti is a Eurovision fan. He likes them and knows who have previously won the contest.

Pertti: Yeah, I’ve always been a great fan of the Eurovision Song Contest. I wanted to play there, so we had to take part in the UMK contest first! And PKN was chosen!

Do you have to prepare many tracks for the competition in advance?

Toni: We had three new songs that were not released yet. We recorded them and sent them to the “jury”. They chose the song “Aina mun pitää” and took the band in. We also made a music video for it.

Knowing it’s Eurovision, will you compromise and write any poppier material for this competition?

Toni: No, only punk rock.

Have you worked any funny dance routines yet for your set to blend in with everyone else?

Toni: No. But I will dance if the television is filming me.

Knowing that Lordi from your home country won it in 2006, are you planning to wear similar costumes?!

Kari: No. I will use my own clothing. My motorcycle vest!

Has Lordi been in touch yet, or are they still stuck in those costumes unable to communicate with other bands since?!

Toni: We were playing with him in Rovaniemi. He came along and sang our song Pyhäpäivä with us.

Kari: He’s also been singing with us. We met and traded phone numbers. He sent our manager a text message a few weeks ago, cheered us on and wished us good luck!

Is there a communal desire to spread the good message that others with learning difficulties can achieve the things they want with some well earnt support within this competition?

Knowing that TV and social media can be a cruel place to be when it comes to the general public having opinions on people’s music, are you ready for the potential backlash?

Toni: I am ready.

Kari: I know and I’m ready.

What message to you have for the haters?

Kari: You don’t have to insult us for a reason like this. If you want to achieve something in your own life, you have to do it. And this is something I want to do.

From seeing you at previous shows, Kari sometimes gets excited and rocks out with an erection in his pants, have you thought of ways of keeping it down if you reach the final so you are not disqualified?!

Toni: We will not win.

Kari: I will not take my penis out at the Eurovision, but other gigs, it’s alright!

Our mutual friend Sean from Hard Skin is famously a big fan of previous winners Abba, as he seems to always DJ their music at punk shows, in an ideal world would you prefer to see him front:

Kari: Making Your Mind Up! Sean is an Abba fan. I like that 70s music too even though I sing different kind of music. If Sean will leave Hard Skin and start singing this kind of music, he would have fun and nice time. He could jump and swing and sing those kind of songs!

Ha! We will try and fix that for you, I’m sure he will be up for it. So finally, are you in it to win it?

Toni: We are going to win. If we win.

Kari: It’ll feel very great, good and awesome. If you’re in for something, you must enjoy it. Full heart.

Good luck from all of us out here, we will be right behind you! 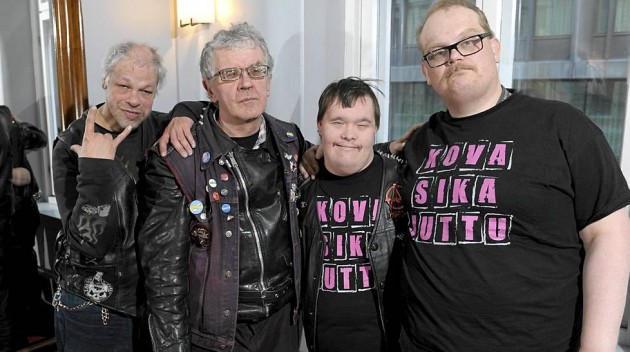