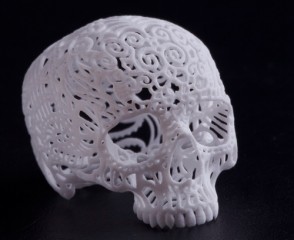 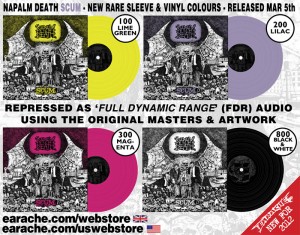 Napalm Death will re-release their debut album on March 5th.

SCUM, originally released in 1987, will be released on limited edition redux CD and coloured vinyl LP to celebrate its 25th anniversary. The album has been remastered from the original tapes and Mick Harris from the band said:

“It sounds wicked – that record still holds up today and I’m proud I was part of it.”

The vinyl will be released thus:

Problems To The Answer
Earache 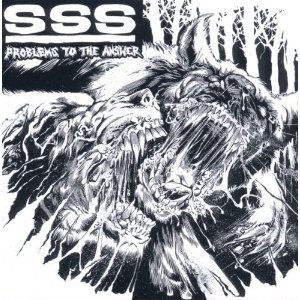 Ladies and gentlemen, the ‘angriest record of the year’ award is well and truly in the bag already. The mid-00s resurgence of thrash was quite rightly a cause for celebration after the genre’s relative drought in the 90s, but in terms of genuinely great record, few of the new school bands held a candle to SSS’s blistering debut. Combining thrash and hardcore with a seething, British malevolence, it infused a classic sound with a fresh sense of vitality.

Fast forward a few years, and although little has changed musically in the SSS camp, they’re sounding ever more refined – and ever angrier. Ripping through 25 tracks in 40-odd minutes, vocalist Foxy takes aim at the meat industry (‘The Kill Floor’) and the mess that is this country’s state education (‘Tales Out Of School’). Much like Gallows did on ‘Grey Britain’, SSS are holding a mirror up to some of the worst aspects of humanity, and it does not make for a pretty picture.

Doesn’t sound like much fun? You couldn’t be more wrong, mainly because ‘Problems To The Answer’ rocks like a bastard, with the riffs never less than razor-sharp, and the pace almost relentless. Napalm Death vocalist Barney Greenway even pops up to lend his leathery lungs on a couple of tracks; clearly, he knows a great band when he hears one.

The sheer velocity means that a few of the shorter tracks do become hard to distinguish, and although the two instrumentals (‘Future Primitive’ and closer ‘Strangenotes’) provide some variety, they both last longer than is really necessary. Ultimately, though, that matters little. In thrash terms, SSS are much closer to prime-era DRI and Crumbsuckers than to anything from ‘Death Magnetic’ (a fact for which we should be forever thankful), and, like too few bands, they’re getting better with time. Long may they rage.

Liverpool thrashers SSS returned from their european tour with vocalist Foxy sporting a broken foot from skating in Austria. Speaking on the wreckage he says “The Wreck and Annoy tour has had its share of ups and downs, the good and the bad and great, we have digested and relished. Tour is what it is, we love it.”

See SSS at the following live dates and watch this daft video of him on a mobility scooter at a Zoo: