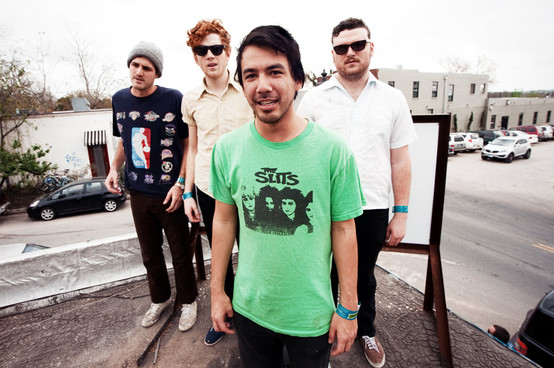 Hidden away is Dingwalls, but tonight Fidlar and support band Drenge are determined to make their voices heard. Drenge are made of two brothers from Sheffield who capture the familiar indie sounds of the steel city tonight. While taking elements from indie veterans The Strokes, Arctic Monkeys and The Libertines, making Drenge sound like a distant relative of theirs.

Dashing through like lightning bolts Fidlar burst into the hysteria and ear-piercing guitar rhythm of ‘Cheap Beer’, before pounding every ounce of energy and mutiny in ‘Stoked and Broke’. Lead singer Zac Carper tells the storming crowd “I want everyone under 30 down at the front” and within seconds the stage gets completely gate-crashed. There are limbs being pulled in agonising directions as one member of the audience even manages to yelp that they’ve broken their hand. Well that’s Rock ‘n’ Roll for you!

Oozing from the L.A quartet comes ‘No Waves’ which prides itself on the birth of a sea of mighty mosh pits. Guitarists Brandon Schwartzel, Elvis Kuehn and drummer Max Kuehn at one point even attempt to make a deal with the security who have been taking a firm monumental stand centre-stage to fight off crowd surfers. This promise comes with trying to make peace with security by getting them out of the way if the crowd “turn it down a notch”. All is well for the first verse of ‘Max Can’t Swim’ then it is back to pure teen destruction.

The likes of rowdy tracks ‘Got No Money’ and ‘Carnivore Girls’ take a blow to the 500 capacity venue, soaking the walls in sweat. The stage diving continues song after song as the band advise kids to “drop out of school and start a band”. It’s Fidlar’s rendition of Blink 182’s ‘Damn It’ though that eats up the venue, swallowing the stage whole by the end of the truly exhausting set.

The rising skate-punk four-piece released their official video for ‘Cheap Beer’ last month. Check them out.