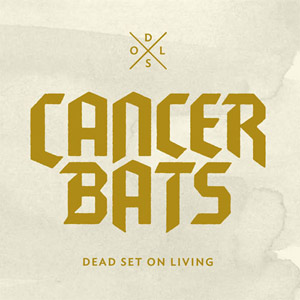 Whilst it’s debatable as to whether Cancer Bats have improved with age (mainly because they’ve yet to release a less-than-great record), ‘Dead Set On Living’ shows that they certainly haven’t mellowed out. It’s amazing that they found time to record the damn thing, given their notoriously long and punishing tour schedules, but it seems that for these guys, there are no difficulties or problems – just challenges to be relished.

It seems appropriate that the Canadian quartet now moonlight as a Black Sabbath tribute band (‘Bat Sabbath’), as this record is stuffed with the kind of thunderous riff action that would surely win Tony Iommi’s approval. Opener ‘R.A.T.S.’ is a prime example; vocalist Liam Cormier unleashing the fury over a groove of seismic proportions, and it sets the tone for much of the album. In contrast, the hardcore influence is less prominent, although ‘Road Sick’ and ‘Old Blood’ would make great soundtracks to a raging circle-pit.

Would a comparison to Pantera be considered blasphemy? In terms of creating a record that’s both catchy as hell and heavy as hell, this is probably the closest that Cancer Bats have come to their own ‘Vulgar Display Of Power’. A step-up to rock’s big league surely beckons, and on this form, they’ll take it in their stride.