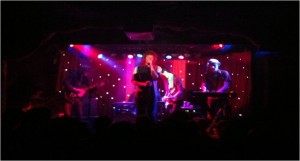 Since their acclaimed debut album Alight of Night, Crystal Stilts’ brand of doom inducing garage pop has certainly turned a lot of heads. Clearly influenced by the architects of melodic reverb, the Jesus and the Mary Chain and their seminal 1986 album Psychocandy, the Brooklyn based quintet are aiming to become the modern equivalent.

The band are currently on an European tour and their second date in the capital at Madame JoJo’s looks set to be one of their biggest gigs in the UK yet. There’s even a certain Steve Lamacq in the crowd too.

Kicking off the set is ‘Sycamore Tree’ which opens with a foggy Forsica organ. The track transcends into a gloom fest thanks to its pairing of subdued tambourines and a dark jangly riff. ‘Half A Moon’ is able to recapture 1950s rockabilly nostalgia at its frantic best. Lead singer Brad Hargett despondently spurts lyrics of “evening night we meet again, I’ll slay the sun if you take my hand”.

Similarly to the new album In Love with Oblivion their set paces by slowly but surely. It isn’t until last year’s single ‘Shake the Shackles’ that the crowd is in high spirits. JB Townsend’s rattles of guitar combined with Hargett’s Ian Curtis-esque cries provide an intimate setting for the small Soho club. The band’s 1980s post-punk influenced sound is evident in their next song ‘Flying Into The Sun’ which is a clear alternative to their reverb-heavy catalogue.

Nearing the end of their set the coincidental resemblance to glam rock classic ‘Get It On’ by T. Rex in ‘Through The Floor’ encourages the biggest reception of the evening. The New Yorkers’ uber cool vibe is maintained throughout but their return from the encore is somewhat of a damp squib. ‘Blood Barons’ and Love Is A Wave’s B-side ‘Sugarbaby’ are maybe a little too laid back for everyone’s liking.

With the NME conveyor belt of hype in rotation for the nineteenth coming of Oasis or the Strokes, there is little justice that one of America’s best indie exports of recent years remain relatively unknown after a performance like this.