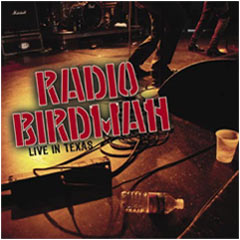 This could well prove to be the last will and testament of Australia’s proto-punk pioneers Radio Birdman, who are permanently grounded following their 2007 tour. They’ve called it quits previously, in not so dissimilar circumstances, way back in ’78. So, never say never (again), but best not hold your breath.

Dedicated followers of the band will eagerly add this live disc to their collections alongside “Eureka Birdman” – that captured the band in all their primal glory, way back in ’77 at the Eureka Hotel, Geelong – and “Ritualism”, with the original band reunited in ‘96 and cranking out the hits to a studio audience.

Fast forward to 2007, and core members Rob Younger (vocals) and guitarists Deniz Tek and Chris Masuak are joined by rock steady bassist Jim Dickson and drummer Russell Hopkinson, but sadly for this tour keyboardist Pip Hoyle was not on-board due to family commitments. Pip’s hammering of the keys is a key ‘Birdman ingredient, and though clearly missed, his absence is made up for by Deniz and Chris stepping up to the mark with a voluminous dual guitar attack. Sonic! This is definitely a warts ‘n all recording, and is suitably raw to boot, which in itself is great RocknRoll defined. The material is a mix of old/classics, new (as was – from the “Zeno Beach” album) and covers, with their take on The Kinks “Till The End Of The Day” really hitting a high point. I thought The Who’s “Circles” meandered a bit, although it probably offered up Rob the chance for a breather!

‘Live in Texas’ is definitely a requisite fans purchase, whilst those fresh-eared and curious are recommended to track down a copy of ‘Birdman’s seminal debut “Radio’s Appear” – one of the greatest albums ever made in my humble opinion. Yeah Hup!