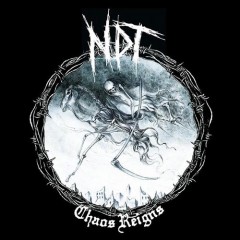 Hailing from Denmark, Nuclear Death Terror is a collective of rag-tag Punx from Euroland and beyond that have been knocking around for a while now. They released a great album a few years back, and also have a couple of 7”s under their bullet belts.

This new CD on Southern Lord collates their most recent release, the “Blood Fire Chaos Death” 12”, on D-takt & Råpunk Records, plus their 2 EP’s. It’s the four new tracks that interest me, and, after scraping myself off the wall, can confirm they are absolutely storming hell hammered metallic punk rock blasters, that will have even the most clean-cut amongst you reaching for your inner crust and shaking a clenched fist in the air, whilst all around chaos reigns.

If you worship at The Alter of Slayer, Tragedy and Antisect, then NDT will more than satisfy. This is raging, bleak, and ugly music that stares down at a world shrouded in violence and despair. I can imagine Robb Stark (of Winterfell) cranking NDT out in his tent, getting psyched to take his hardened troops into battle, annihilation, or death.