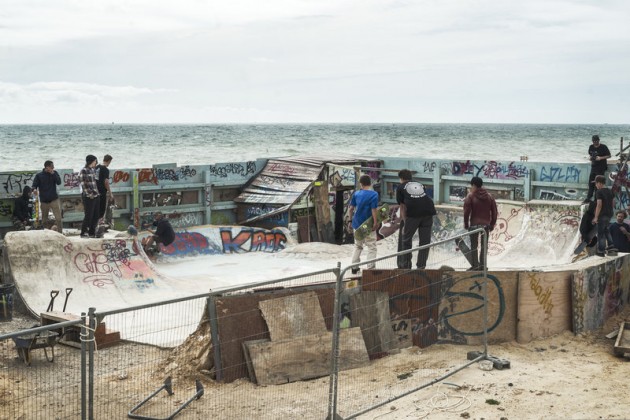 Brighton’s skate scene has a pirate mentality. It always felt like walking the plank dropping into the Level back in the late 80s, you never knew whether you would be eaten alive by the Pig City locals, or walk away stoned and happy. That usually depended on what you had in your locker, what you could put down and leave on their turf – if you could get a run, that is.

The Pig City legacy from 1986 is one of hard graft, it carries a never-say-die attitude like a warning flag still fluttering in the English Channel winds. This summer, David Wheatland and Justin ‘Pasty’ Ashbury‘s latest DIY crew were on a mission to build Brighton locals a new home. Blag Rock was born and now sits tightly against the the beach getting sessioned when weather allows. Wheatland has spent the last few months arguing online with local shops about bucket collections and DIY ethics but local vibes and opinions aside, these guys made it happen with whatever they had to hand and nailed it.

David, please spill the beans on your DIY past for those not in the know.

Pig City, as a lot of your readers will already know, is the name that relates to our city, the skate scene, the establishment and the skate company here in Brighton. We’ve been creating DIY places to skate since day one of the UK skate scene and our city has a mass of history spanning four decades. I’ve enjoyed many years of DIY experience starting back in the early 90’s helping the older guys make their DIY mini ramps in Shoreham-by-Sea but we have guys in our DIY crew like Justin Ashby who also made the Level vert ramp back in the day with the infamous Pig City boys.

DIY spots come and go sadly, but how do you fund them at this level?

Our last spot was amazing but sadly got taken down, so this year we really went for it to get a rad spot that we could secure from being ripped down early. Last year we took part in the Red Bull DIY build your own spot comp and we worked with a local shop that got us the concrete and tools for free. I manage the boys and make sure I get them stuff and I been getting all the donations for them with tools and supplies. 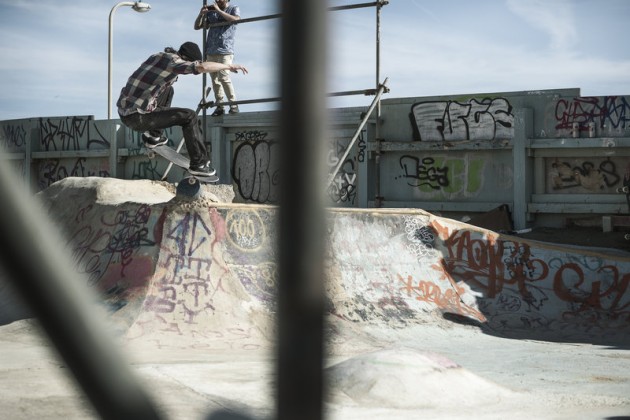 How did finding the land at Blag Rock take shape?

I went with Fay from the Level to check out this ‘Black Rock’ spot after a local council worker and friend Ricardo said the site was available to use for a temporary “exhibit space”, so Rick and Fay set up a meeting with the seafront officer. We drove there to meet the council at the spot and to my surprise and excitement, I spotted potential building materials we could ever need there. Tons and tons of sand and hard core, pallets, scaffolding, sheets and sheets of thick ply and piles of 2×4 long lengths of timber. Without saying a word, we discussed what was required to rent/lease this nearly 100m secure compound. The main thing we needed next was was insurance. We tried to get quotes but we knew we would run out of time as there was a few companies wanting to use this spot, namely the Brighton Marina building company who we later end up calling Hanson. Pretty much all of the boys were like “fuck this, we need to get building and can’t be arsed with going the legitimate route of building at this spot”, so we pretty much went rouge and got cracking.

So you didn’t have to sign any paper work or actually rent the area then? How did they not notice what was occurring then?

They did, but the sea front office lady was nice and the building company site director turned out to be an old friend of Danny Wainwright. We had this imaginary scale that just went up and up, a chart of how much this spot had to give over the months of build time.

If in doubt just put it in Peter Hewitt’s name. 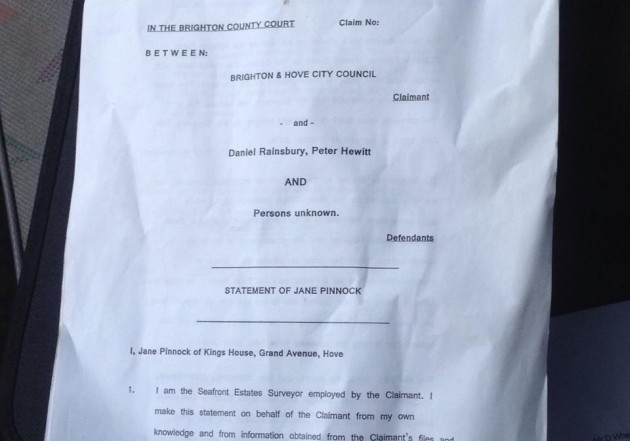 Who designed the layout, or did you just build as you went along?

It naturally just came into shape. We first started with a test build to check out this type of sand we have never previously used, but first, we needed shelter from the wind to chill in and skin up. Actually, the main reason is that we needed to find somewhere for Pasty to sleep, so we started off by building Pasty’s shed.

Ah, good old Pasty eh, the skateboarder with a thousand stories. I’m sure you have a few…

Haha! I have a few for sure, but Ladislav Guzsela, the site manager, told me he got knock on the door on the morning of the caravan demolition. He’d been given a short amount of time to remove his stuff and tried to wake Pasty up. As he opened his eyes, he declared that “none of this shit is mine” and went back to sleep. When Ladi left, the demolition guy said, “I’d better go and make sure no one is in there before they put a JCB through it”. When the guy went in there check, Justin was still asleep under a cover. Close call.

Pasty: Yeah, I wasn’t gonna move until Ladi smashed the window on me where I was sleeping. I wasn’t happy. I started smashing shit up while Ladi was freaking out shouting: “Get up, the bailiffs are here!”

Ladislav: The council asked as to leave the place and we didn’t so they evicted us from the caravans and after 2 weeks they brought a machine in and destroyed the trailers, where I was living with Adam {Moog). At the time loads of traveler’s where set up the road so little pikies were destroying our ramps. I let the dog chase them out.

Get to know Blag Rock from this new edit featuring Stevie Thompson and more.

Usually these things come and go so quickly, have then been threats of losing it to other locals wanting the space?

We were at the spot building just three days in when we heard that it was going to be taken over by a building company, by a guy squaring up one of the two large caravans on site. The caravans had been there for just over a year, used by a sand sculpture guy who used this area for sand creations. This guy was really sound and gave use a spare key for the gate, giving us easy access door that opened up right onto our build. We asked the guy about using the caravan next door to him and after a few days getting to know us he give Moog. Ladi and Pasty the key. Really sick van, we were so stoked.

By this time we had three quarter pipes, a pump bump and a big bit of floor space completed and our tool shed was looking sweet. We were cracking on when two guys start walking over wearing high viz apparel looking all official. We chatted to them about who we are what we doing and he told us that the site director for the building company in the Marina and that he had a massive project on the go. They wanted this land for open storage, so we asked if it’s going effect our little corner, and he said it will in a month or so, until he gets the land. As an old friend of Wainwright’s, he wouldn’t do anything to our spot with chatting to us about it, which was nice. So we’ve had it since then and seen many sessions go down.

Were any of the obstacles given local names?

We have a corner curb stone that we put in the corner as a wally transfer, which we called the hernia affair.

Where is the spot at now in terms of build?

Black Rock has been used by graf artists all round the country for 20 years, also there have been many illegal raves here so building in this spot just felt right. This place is like a desert with a fort round it. The spot was hard work for sure, but it’s come together at last. It’s a great place to chill out by the beach.

To this day it’s constantly being modified and worked on every other week. It now has cobbled coping, a big wally gap and a new drain has been laid in the deep end. We had a amazing time on this spot and I was stoked to see so many skaters pro’s and bro’s come from all over to skate it. Some of them coming down and not even going to the new Level park, just us! Next year we will get a new spot somewhere rad in Pig City, watch this space.

Follow Pig City on Facebook and pick up their clothing from this online shop. Also be aware of the fund raiser that is currently running in Brighton to help fund a new indoor park, your donations will be gratefully received.

Drawing Boards’ Isaac Miller has rolled out more bangers from his bag of tricks down at the Level Skatepark in Brighton, watch it here.