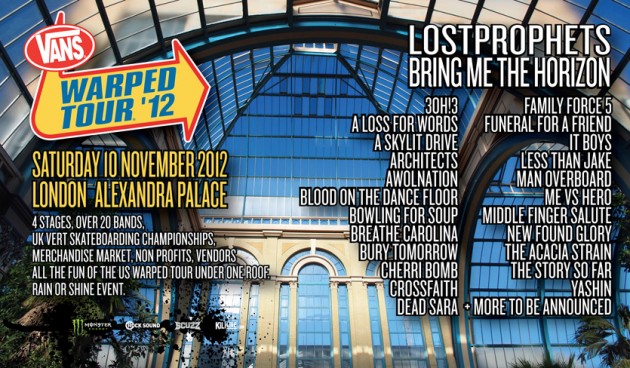 With still many more bands to announce, the UK date of the legendary Vans Warped Tour has sold out with around two months to go until the event. This years festival will take place at Alexandra Palace in London on November 10th and the line up promises to make it one hell of a show.

As well as headliners Lostprophets and Bring Me The Horizon there are a whole host of awesome bands including Funeral For A Friend, The Story So Far, Man Overboard, Architects, Bury Tomorrow and The Acacia Strain. There are also a few controversial choices on the list including Blood On The Dancefloor!

In addition to the music event it has been confirmed that a number of Vans skate and BMX team riders will be making an appearance as well as Steve Caballero and Dennis McCoy with many more to be announced.

Although the London event has sold out there are still a handful of tickets remaining for ‘Road To Warped Tour’ headlined by New Found Glory. Pick them up here.