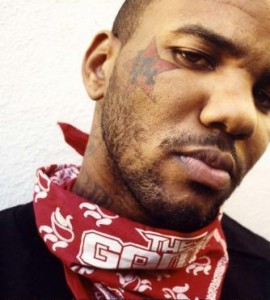 Game doesn’t seem to be as popular as he should be in the UK. A slew of big hits and solid albums behind him and you’d have thought the Compton rapper would have packed out the Forum following the likes of Rick Ross and Wiz Khalifa earlier in the year. It was by no means empty, but there was certainly room to manoeuvre unlike the sardine-like sweatbox of the Bawse’s show. However, it didn’t stop Jayceon Taylor as he strode on stage, kicking the night off with Kendrick Lamar’s guest verse on The City.

With the crowd having bayed his name through the sub-standard opening sets of the rapper’s Black Wall Street label, Game didn’t disappoint, running confidently through classic tracks as well as bangers from this year’s The R.E.D. Album, showcasing his talent for both rapping and entertaining. Where tracks like Dope Boys and Let’s Ride bounced and smacked the speakers, Game also showed he could switch it up with Hate It Or Love It and My Life, both to great acclaim from the paying public.

It was One Blood that proved to be the show-stealer as everyone wearing Black Wall Street merchandise was invited up onto the stage with a sea of red crowding around the rapper and everyone else in the crowd slamming their hands down with the beat as hype men jumped from the speaker stacks and smiles swarmed across both performers and fans. Finishing up with the stage still full was the much poppier Pot Of Gold but if anything the volume went up a notch as Chris Brown’s chorus rang out around the Kentish Town venue.

He might not be as big as his peers, but he’s just as talented. A great night out.