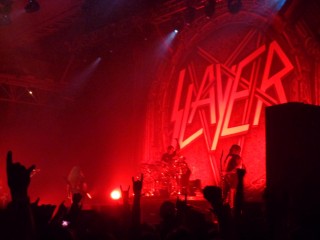 Too many folks out there seem to associate ATP events with satchels and hairslides, when in fact they’ve often boasted more than a smattering of quality heavier acts. This year, they’ve even been kind enough to book a whole afternoon of such acts, with Yob, The Melvins and Wolves In The Throne Room impressing the early birds. The ace up their collective sleeve, however, is getting legendary doom-mongers Sleep to slow things down to funereal pace, before giving us a rude-reawakening with the almighty SLAYER!

In case you didn’t know, all is not well in the Slayer camp, with guitarist Jeff Hanneman still on a forced hiatus due to a bout of necrotizing fasciitis (that’s inspiration for their next album in the bag, then). But just as a tiger will attack if cornered, Slayer have decided that attack is the best form of defence against life’s adversities, and the opening brace of ‘World Painted Blood’ and ‘Psychopathy Red’ sound utterly fucking venomous.

The real reason why we’re all here, though, is because Tom Araya and his not-so-merry men have promised us a run-through of their classic ‘Reign In Blood’ in its entirety. Even in the cavernous confines of the Alexandra Palace, ‘Angel Of Death’ still sounds as crisp as on record, and twice as brutal, igniting a warzone of a pit. Even a restarted ‘Reborn’ can’t derail this thrash metal bullet train, and by the time that immortal title track arrives, we initially struggle to hear guitarist Kerry King over the voices of the crowd singing along to THAT riff.

As they bid us goodnight with a suitably brutal ‘War Ensemble’, you can’t help but wonder how many other bands sound this good, past their 30th anniversary and minus a key founding member. If ever Slayer regain their full strength….then Satan help us all.

Watch footage from the show from James Sherry’s man cam hands and note that this week he thought an RT meant the Radio Times!