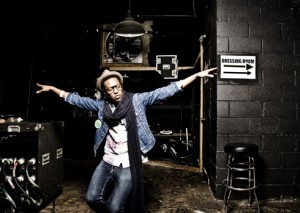 It was over five years ago that I first saw Spank Rock in London when they rocked the Barfly in Camden to a packed out, sweaty crowd. During that show, the stationary crowd dimmed what was a bright performance and it would have been a shame if that were the same in 2011 but thankfully the rammed Dalston venue contained an audience ready to dance their hearts out.

Spank Rock’s album Yoyoyoyoyo still sounds as bassy and upbeat as it ever did when they the energetic MC ran through tracks like Backyard Betty (undoubtedly the greatest song about an ass-shaking competition champ), Sweet Talk and Coke & Wet. They finished up with crowd favourite Bump with the talented Amanda Blank, who had been an able hype-girl throughout, getting her time to shine delivering lines about her unmentionables, much to the delight of the grinning attendees.

It wasn’t just a run-through of the old material however, as new tracks eased their way into the set and stood side-by-side with their classics. Even when they hit a different style with Energy, the delivery was so on point that not a single body was still. The drums clapped hard and the bass boomed out over the Nest ensuring a great time was had by all, even those of us who were fighting against the giant pillar in the middle of the room obscuring the view.

The new album, Everything is Boring and Everyone is a Fucking Liar, is due out this year and if tonight was anything to go by, it’s going to be a hell of a lot of fun.