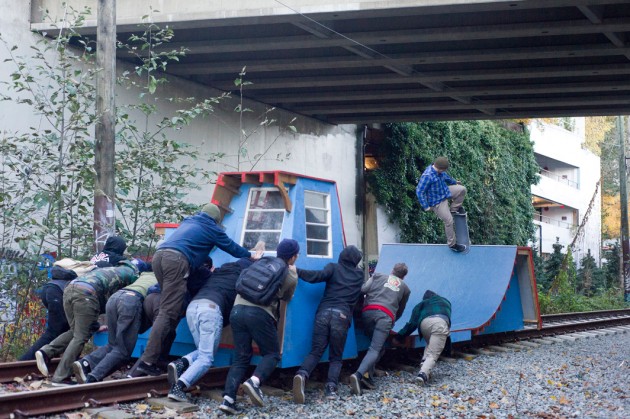 Skate and Create. It’s the fundamental reason why we all started pushing these damn planks in the first place and once mastered, the idea bank can be an endless pool of fun. This week’s stoke is found in British Columbia, Canada where Benny and brother Christian Zenga, (two of four creative brothers, aka the Zenga Bros), have created an adventure that only the forward thinkers achieve.

This is not the first time the Zenga Bros have excited us from their home country though, back in 2011 an explosive video edit shot in the infamous Leeside Tunnel for Halloween spread through the web. It captured the carnage and annihilation of an electrifying skate sesh that most would want an invite to, even if it meant getting burnt to shreds in the process.

You can see that at the end of this feature but today, our homage to their work relates to their new film project released this week, so before Benny discusses how this awesome project came together, take in Skate Heads.

Easy Benny, congrats on the new edit, how did this concept come to fruition?

So this artist/curator/mastermind Jeff Hamada, who runs a popular art blog called Booooooom, approached us about collaborating on an art project. For this project, Jeff initiated what he calls “an ongoing collaboration between Booooooom and Flexfit, to give emerging creators a chance turn a dream project into reality”. That’s pretty much what it was. We came up with Skate Heads as a way of combining a bunch of things we really like: mobile living spaces, DIY skateboarding and ECCENTRIFING THE WORLD! It’s about bringing something unexpected into the streets and having a rad time.

Ph: When was the last time you rowed to the sesh, in the sesh? 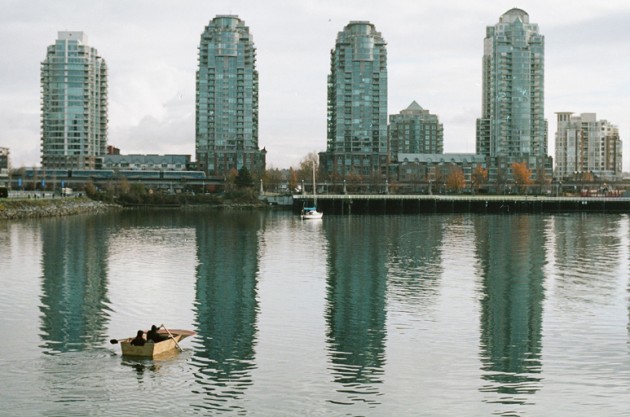 Making skateable objects and getting it right can be difficult, especially when it comes to taking it to railways and water, how did you all decide on what to build for this?

The Genesis of the project was my brother Christian’s sketchbook. Christian has been developing a series of ‘graffiti living’ pieces, which are micro studio spaces, installed in unexpected places around the city. The idea is to become graffiti. We see these installations as urban lighthouses which remind us to do unexpected things, ignite curiosity and bring creativity into our daily lives so the different pieces in Skate Heads evolved naturally.

Since moving to Vancouver a few years ago, I always wanted my own boat. Often when I see boats sitting out of the water and turned upside down, I think that’d make a rad jump ramp or grindable ledge. So I found an old wooden boat and accentuated certain features to make it more skateable. I built a pronounced bow and added a grindable keel. Then we painted it to look like a giant head. We wanted each piece to have distinct characteristics in each stage of its transformation; whether as a boat in the water, or as a giant head when it’s hoisted up, and as a completely a skateable obstacle when it’s turned over.

The rail ramp: well, we love tiny houses. We grew up building mini ramps and we’re always looking to make use of discarded spaces. Combining these things was obvious to us.

Ph: Nate Lacoste sails a fatty over the boat. 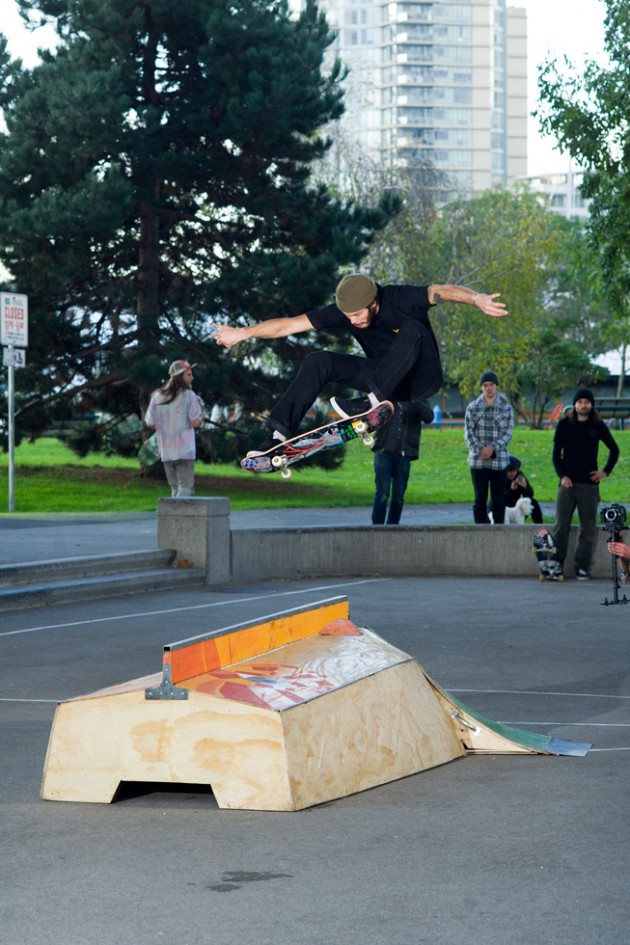 It must have been a huge amount of work to put together and with a heavy load, especially with the rail ramp.

It was a lot of work, an exhausting amount of work. It was, at times, totally brutal. We built all the ramps in two weeks and shot the video over two days. The video involved moving a number of these skateable structures around the city, one of them being a halfpipe with cabins built on either end. The rail ramp was very heavy and we moved it all by hand. The night mission to install the rail ramp was ridiculous. We pushed it 500 yards down a derelict train track in the dark. There were fallen hydro poles in the way and vines and wires which we tripped over in the dark. It was so ridiculous and demanding that we couldn’t help but laugh at ourselves. But then at the same time, pushing and dragging that cabin-ramp down the tracks and finally reaching our destination under the bridge, everyone involved shared an immense sense of satisfaction. It was such a rad adventure.

Ph: Adam Hopkins takes a backside boneless on the cabin. 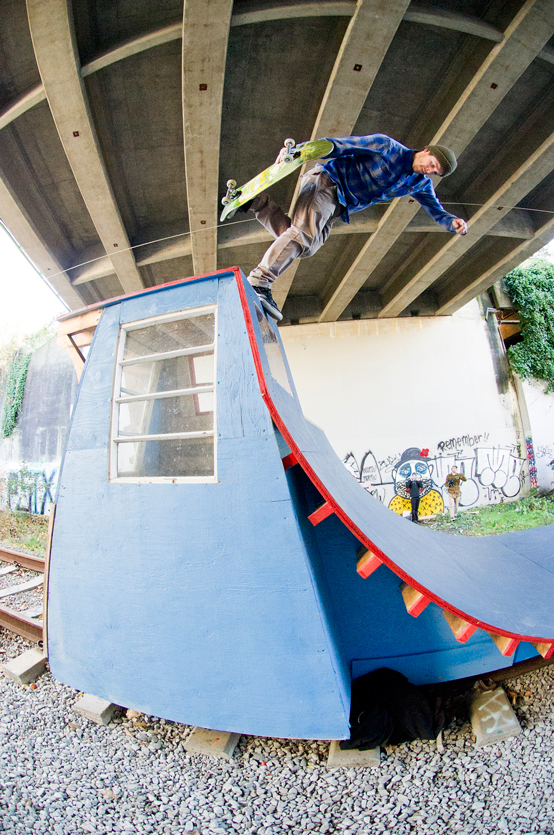 In a nutshell, what is Skate Heads?

Skateboarding is inherently about adapting and repurposing the urban landscape, but somehow even skateboarding can settle into a complacent state, where certain approaches become the norm. When street skating first started it was weird and abrasive, and that’ll always be there with wheels rattling down the sidewalk, but it’s good to remind ourselves to maintain a sense of foolishness, exploration and wonder; that is skateboarding. For us, making a backyard ramp was the ultimate form of creating our own adventure playground. Skate Heads has been a continuation of that.

Photography courtesy of Gordon Nicholas. Find the Zenga Bros (below) on FB and Insta. 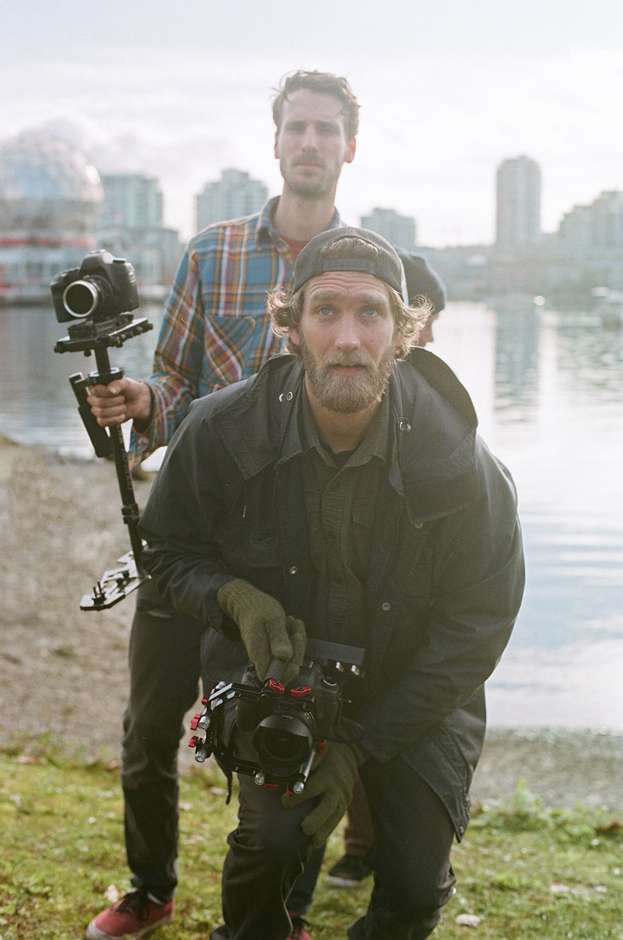 That Leeside jam has to be seen again…