This is a short story about a local skate scene that got off their backsides to create somewhere dry to skate. As you know us Brits have it bad weather-wise. We endure endless winters, one month summers, and damp sessions across the cold months, as a result, the pleasure can sometimes get sucked out of you, but only if you are not living the dream.

The local skate scene in Essex had a dream. It didn’t include fat slags, orange sunbed jobs and pissed up geezers mooning out of jazzed-up Ford Escorts, theirs was extremely simple. All they had to do was to find an unused space to takeover and the vision and positive energy combined would take them to the place they always wanted; a playing field where anything goes, where everyone is on par, where all who are on board chip in. That place, that dream became a reality and is known locally as URBSIDE.

There’s no doubt that the current DIY movement has been inspired by the likes of Pontus Alv in Sweden, who, after pushing the boundaries, and the knock-backs that come with watching his handy-work smashed to pieces by bulldozers, never gave up. If there’s a will, there’s a way, and fortunately that mentality has been distilled in all skateboarders from day one, across every generation.

Back in the 80s we would make jump ramps, nail British Gas pipes to scaffold poles, build mini ramps under disused railways lines, bridge the gaps to banks with filler; whatever it takes, we all have to have fun and there’s no better way of doing that than building your own. The sense of achievement that comes with it makes it that much sweeter.

At the beginning of April, a call to arms for an overhaul was raised by Mark Radman and others. Urbside needed fresh blood, new terrain and most importantly, it needed everyone local to chip in to make it work. This small feature (with words from Radman) is designed to ignite your hunger and appreciate what it means to all stick together in order to have fun. Do it.

Big thanks to Streetbeers for the build photos, Rob Galpin for the skate shots and Dan Joyce for the copter footage.

How long did it take to find the location you wanted for this DIY project?

We knew about the location of the spot for years but we never built anything there. We used to go and skate it sometimes when it rained because it was always dry under the bridge. I first saw the spot on a skate video when I was a bit younger, Nicolson’s Part on Death Skateboards’ ‘Better Than Life‘. I always wanted to go there, and after skating it for a while and raining loads, just put two and two together and started building some stuff.

Had you tried to erect a spot somewhere else first which was busted, or did you get lucky first time?

I checked out a lot of places to build local to me, I kind of wanted to have something to skate tucked out the way and undercover. I nearly started on this underpass in some woods near my house but it was just too far to carry materials in there. James and Forrest built a wall ride up a pillar a few miles down the road from the spot we are at now, but it was always a bust because you had to cross this moody farmers land to get to it, and sometimes the police used to come and kick you off. So I gave it a go at the spot we are at now and we’ve never been told to leave so we just cracked on. The council have been sound about it, so yeah, we got lucky!

Who is involved hands-on with this?

Myself, James Glen, Sam Naunton, Forrest King, Alex Diss, Mark Nicolson and all the homies too.

Photo: You’re not DIY unless you can crack a bs disaster sugarcane like this. Radman takes a sweet one shot by Rob Galpin. 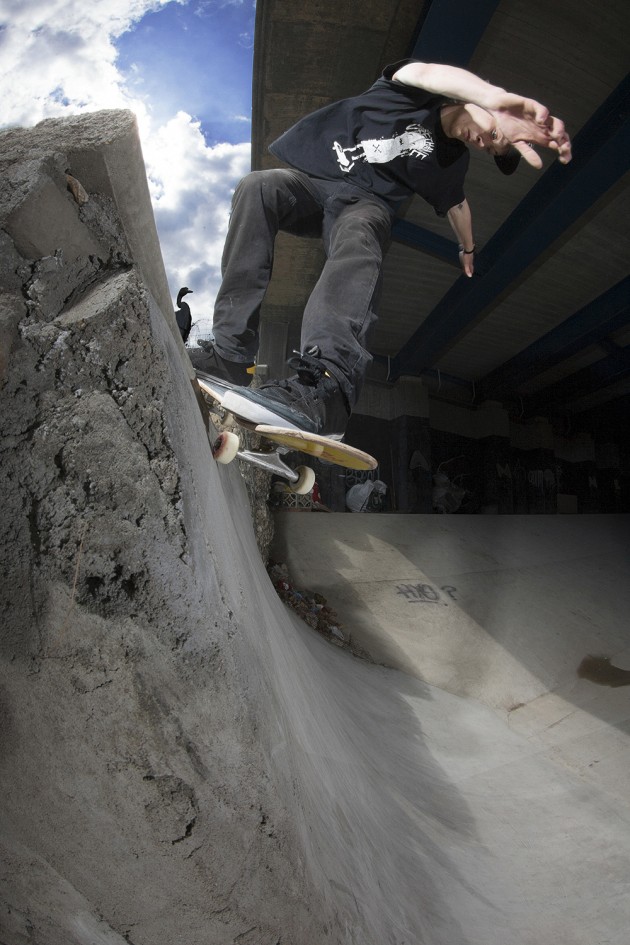 How long did it take to build?

I think we’ve been building roughly for two years in August this year. It was always skateable but it just gets more skateable and fun every time we build something new.

We see that you had a refit last month, how do you all call the shots on what’s being built down there?

Yeah, I was really hyped everyone came down to help us with a big build, shout outs to everyone and all the crews that came down and got stuck in and made shit happen, stoked! It gets skated a lot and whenever you run out of speed or there’s a bit of a gap we just try to fill it with something that would be interesting to skate. We all have a bit of a discussion on what it will be sometimes too, it’s rad.

Is there a tendency to look at other spots to see what’s possible with new obstacles?

I dunno, I think we just like to be inspired as it comes and see what we want to skate come and then up with an idea that would fit and then try to build it. I’ve looked into a lot of other spots to see how other people build and the way they do things too. 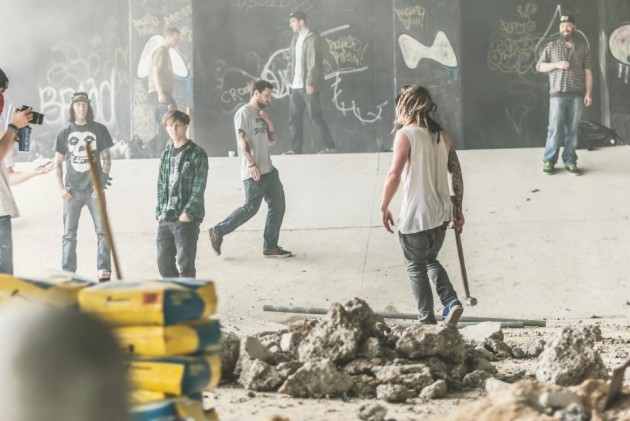 I guess building something amazing from the smallest amount of effort is the key right?

Yeah, and something that can be built with the least cash as possible too!

What’s the perfect concrete mix for surface perfection and coping? Got it down yet?

I don’t think we have stumbled across the perfect mix yet, were getting to it though. You can’t really go wrong with coping as long as you set it in right, but curbs, concrete edge, metal or anything is good for it. We use whatever your feeling at the time and whatever is laying about.

How ‘locals only’ have you made it down there?

It’s not locals only, we all built it and we all skate it. If anyone else likes the look of it and fancies a session they are well welcome to come down and have a skate fo sho! 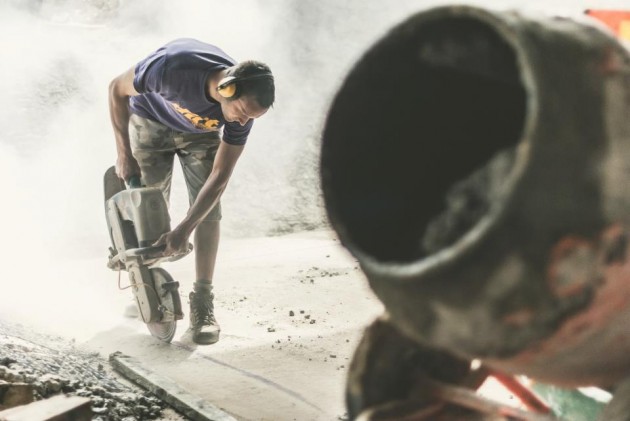 Give us an Urbside story…

The banks had tiles stolen from them before we started building under the bridge. Some were missing, we built a few things, then the road people paid to resurface the banks from top to bottom, so it was fixed and safe. Eventually we could skate the whole thing again and the people that got paid to do it had some spare concrete and finished off one of our ramps for us and built another new crazy little ramp too!

Who is by far the laziest fucker down there when it comes to chipping in?

Haha! No naming names Zac, I think we all get a bit lazy sometimes.

Finally, can we host a Crossfire jam there this summer? 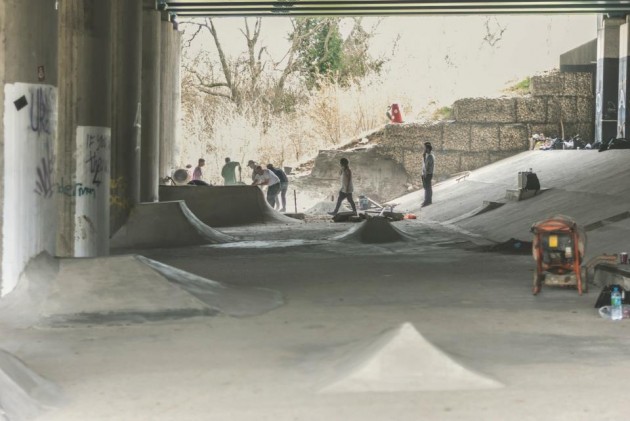 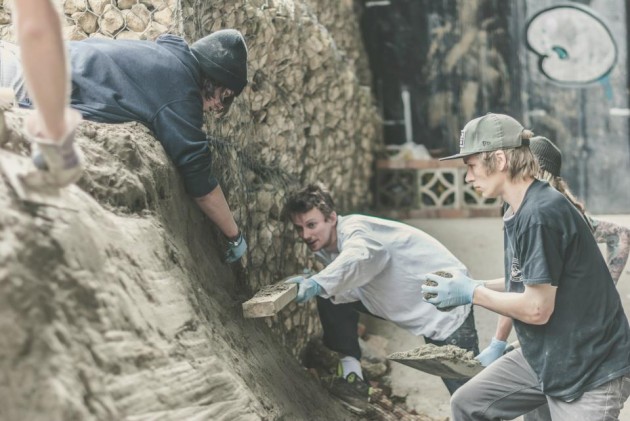 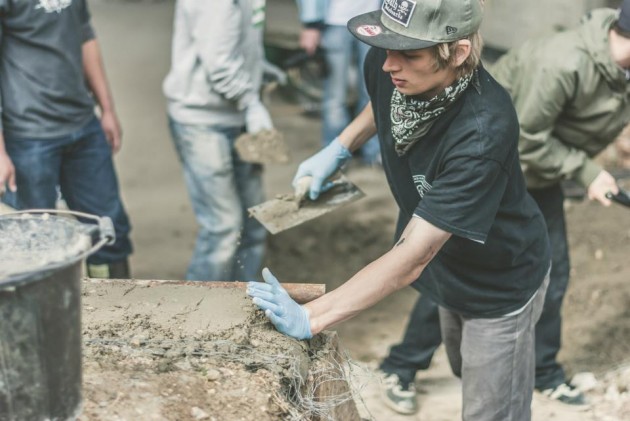 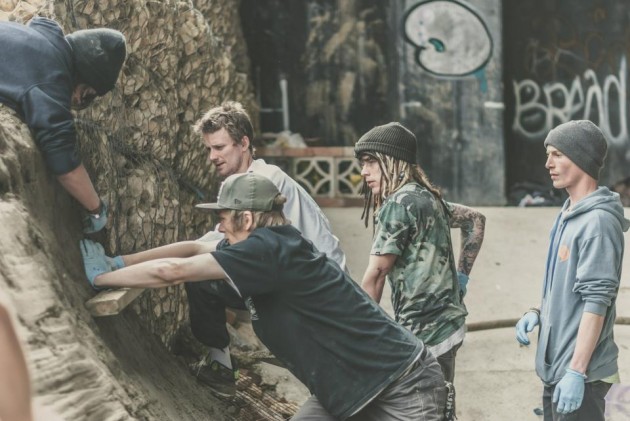 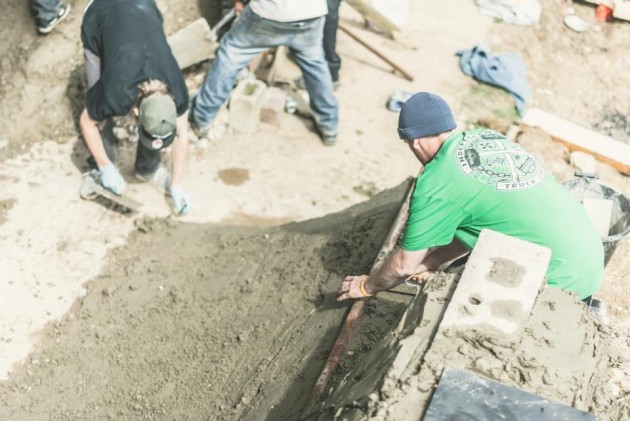 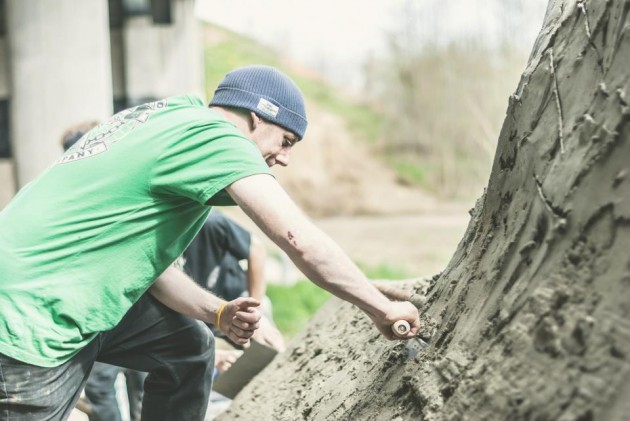 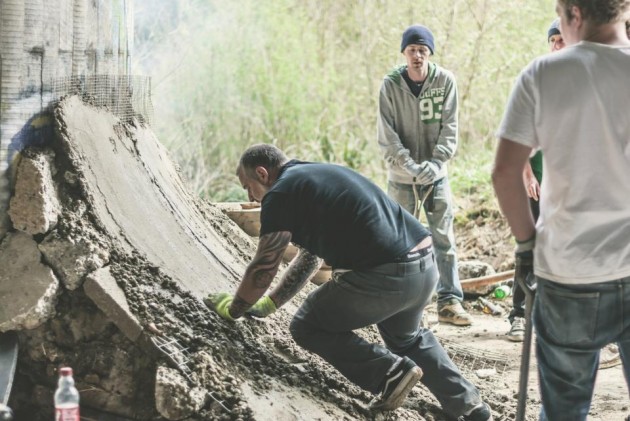 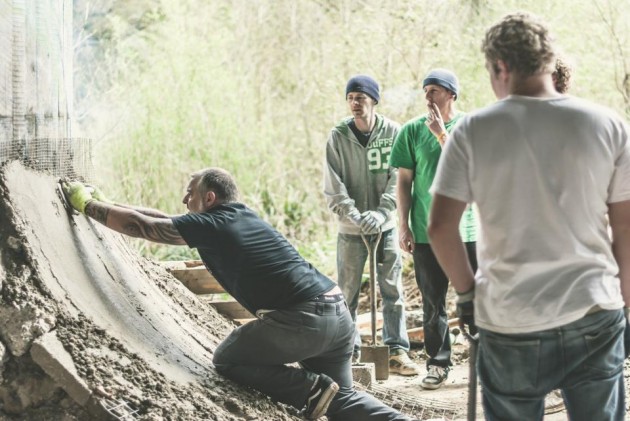 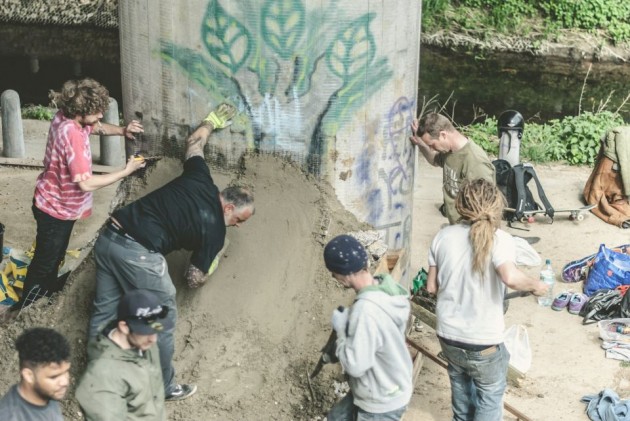 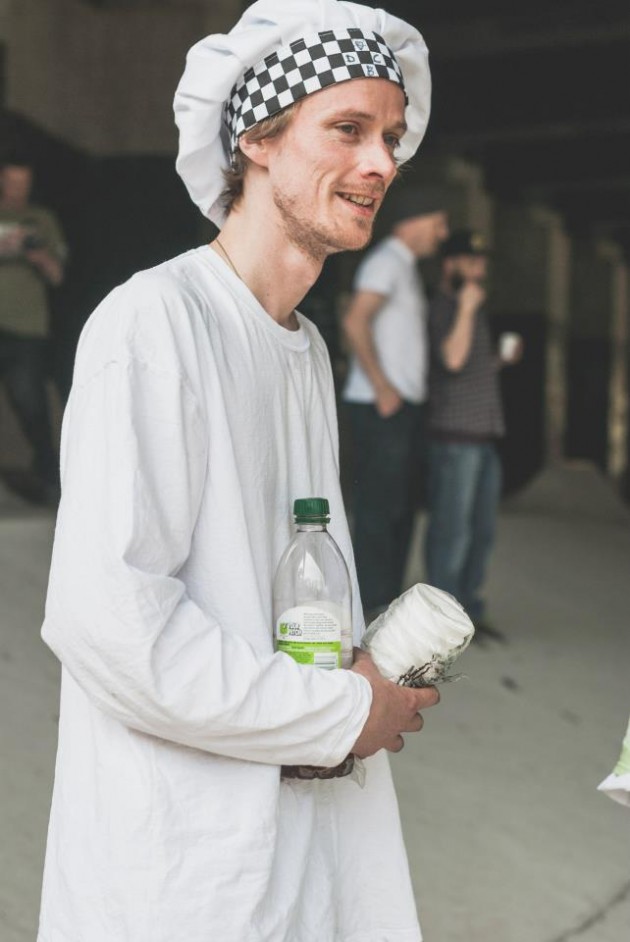 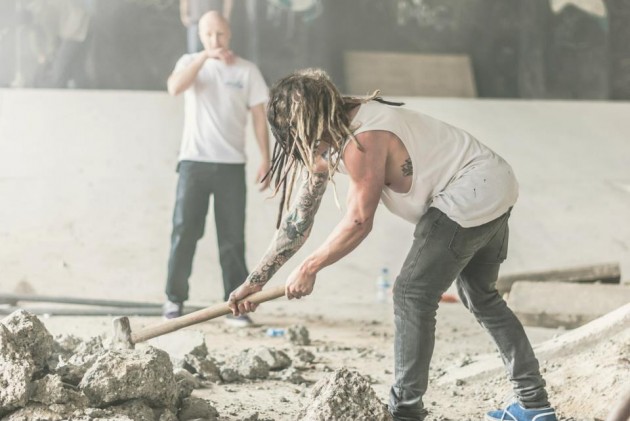 There’s a severe lack of bangers on this last photo, get down there to add your own. 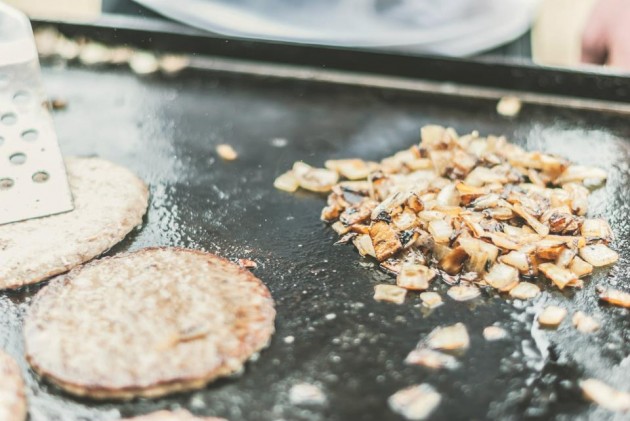 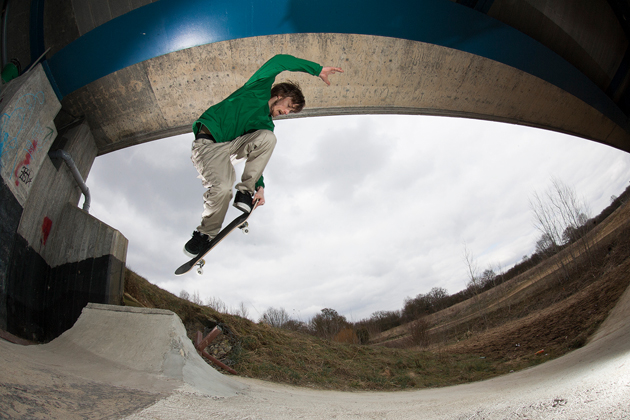