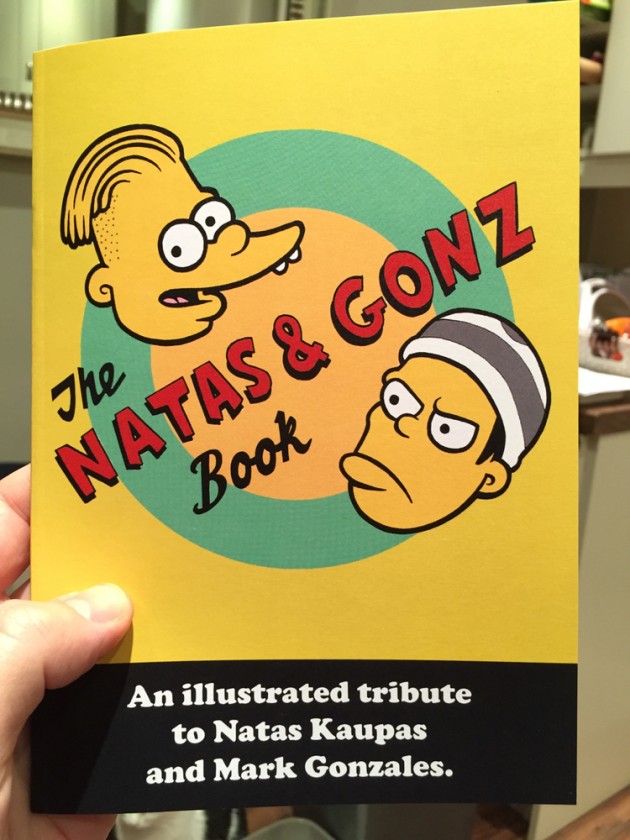 As tributes go there’s nothing better to keep than an illustrated book, especially when so many dons with pen and ink skills around the world club together to assist in making Ed Syder‘s dream come true. His new 52 page book, that pays homage to legendary skaters Natas Kaupas and Mark Gonzales, came to life after a successful crowdfunding exercise and is currently flying off the shelves this month and admired by many.

Obviously it took a lot of work to piece together so we asked participating illustrator and top dude Jon Horner to delve into how this all came together with Ed himself.

JH – Tell us where this all started. Was it an image or a story? Was the idea for the book fully formed from the start or was it something that you ran with?

ES – I had the idea of doing a ‘Janet & John’ style kids book, but with skaters. That grew out of doing an alphabet of pro skaters just before. Getting others involved meant it all happened quicker than it would if it was just me making a zine.

JH – And why Gonz and Natas in particular?

ES – I’d just seen those videos about them skating together like that ‘On Video’ about Natas. It was gonna either be them or Neil & Lance.

JH – Any plans to do a sequel? A Neil and Lance book would be rad!

ES – Yeah that’d be good. I’d rather someone else did all the crowd funding/posting the books out. My evenings are just filling Jiffy bags at the moment.

JH – Haha! It seems like the Indiegogo campaign was fairly successful then, how did that come together?

ES – I raised a grand which was enough to make 100 books/sticker sheets and 30 t-shirts. I’d hoped to get more printed by raising more but hey, whatever. The books are almost all gone, so maybe I’ll get some more printed up if there’s enough interest.

JH – That’s great news. I saw that the Palomino have been selling copies too, did you approach any other skate shops/distributors or did you want to keep it DIY?

ES – Nick (Sharratt from Palomino) was into stocking it, as was Larry from Pure Fun Skate Zine in the states. Beach gallery in London were in touch this week, so if I get some more made they’ll be stocking it. I’m new to all of this but everyone’s been really cool so far. 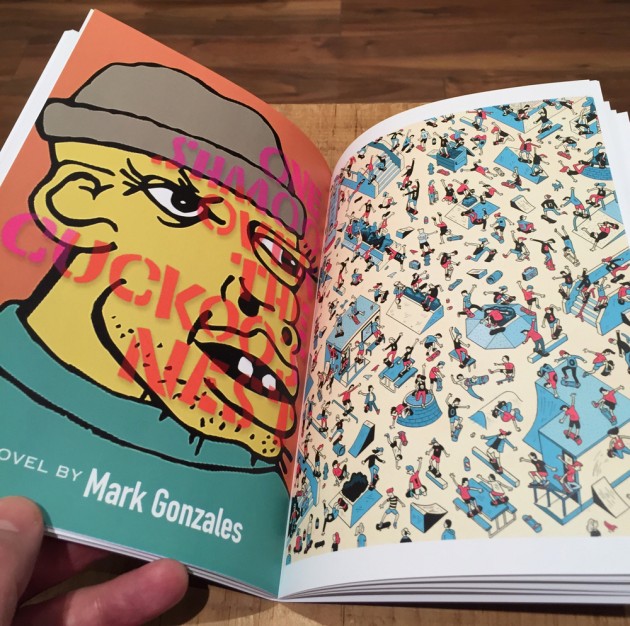 JH – So have you heard from Gonz and Natas? Natas seems pretty keen on it on Instagram…

ES – Yeah that’s amazing. Thomas Campbell tagged him in a post a while back, then he sent me his address so the book’s on the way.

ES – Your strip in the book was pretty great. How did you find doing that? I’m interviewing you now…

JH – Haha! The old Tennessee switcheroo! I loved doing it. Natas and Gonz have had some of the best graphics ever so it was really fun to try and get them all together somehow.

JH – If you had to pick one of each, which Gonz and Natas boards would you take to a desert island?

ES – I really like that Blind Gonz with the green woman and the guy on a dog leash. I had it on a t-shirt for years, it pretty much crumbled into pieces.

Oh, and an SMA Natas kitten with the ball of wool. My little brother had that deck.

JH – What else are you working on at the moment?

ES – I’ve done a couple of boards for The Friend Ship and I’m doing another tee for Metro Skateboarding and one for Pure Fun zine.

Oh nice! I like how The Friend Ship is becoming a little American haven for UK artists.

ES – Oh yeah, I liked your Blender one.

ES – And Phil Morgan (who’s in the book) did that sweet Louie Barletta deck. Logo boards suck anyway, so this is all g 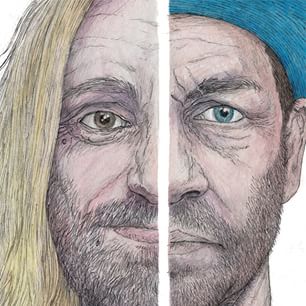 JH – Yeah, I think that was meant to be a Jason Park pro board but he jumped ship (pun fully intended). He’s done another for them too that isn’t out yet.

ES – Ha, I did a Jason Park board as well for a company that never happened.

ES – Joel from Metro was trying to set up company that did one off pro models, but I guess there wasn’t the money. It was a Bert and Ernie graphic with Jason Park written like Sesame Street.

JH – How did you get involved with Metro?

ES – Joel was Corey Duffel’s first shop sponsor. So he got in touch off the back of the board I did for Foundation. Well, the contest I won.

JH – Someone who’s been on a lot of companies…

ES – They could have it on the Berrics.

JH – Yes! Good call! Plus he had a Wight Trash guest board so you can link him to loads of UK guys too.

ES – There’s your next Sidewalk comic right there. 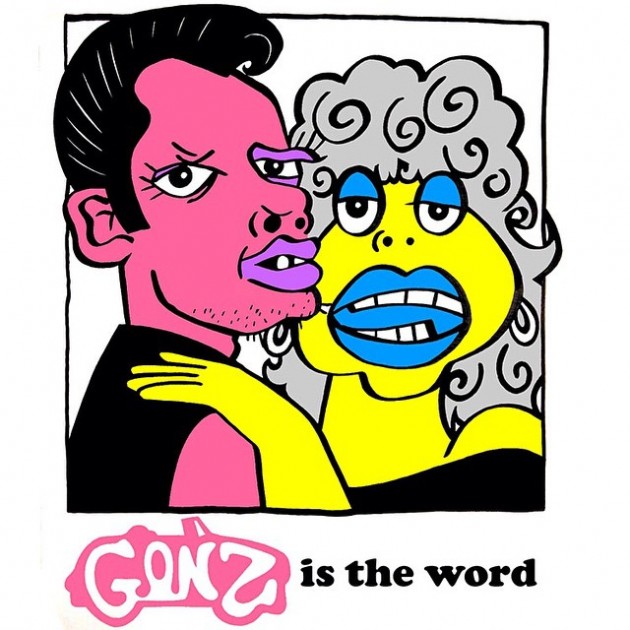 JH – Ha! Good work. If you could do a board for anyone in the world who would it be and why?

ES – Lizzie Armanto pro model. Or one of the Bones Brigade.

JH – Do you know when it’s coming out?

ES – The next ‘season’ I think (whenever that is).

JH – Final question. Taking everything into account (skating/art/impact on you when you were a grom etc), Natas or Gonz?

ES – I’ll say Gonz. The first picture of skating I ever saw: Mark Gonzales skating a vert ramp in an old RAD mag in about ’87 or ’88.

The Natas & Gonz book is A) rad B) only a tenner and C) available from these fine outlets: 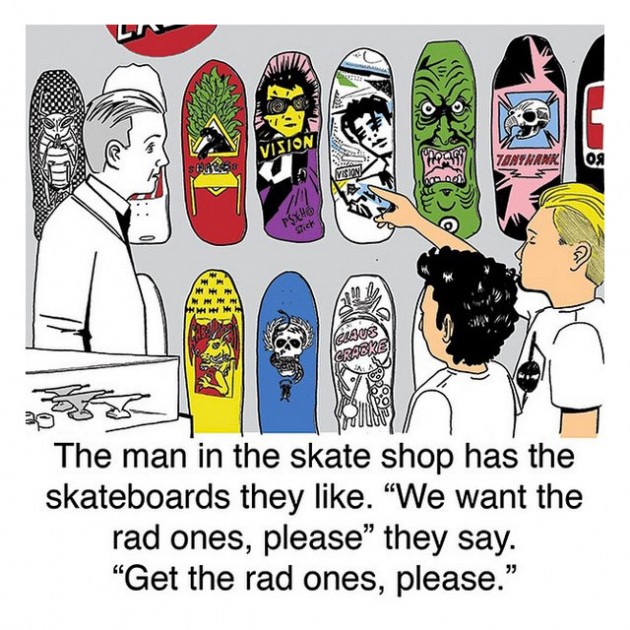