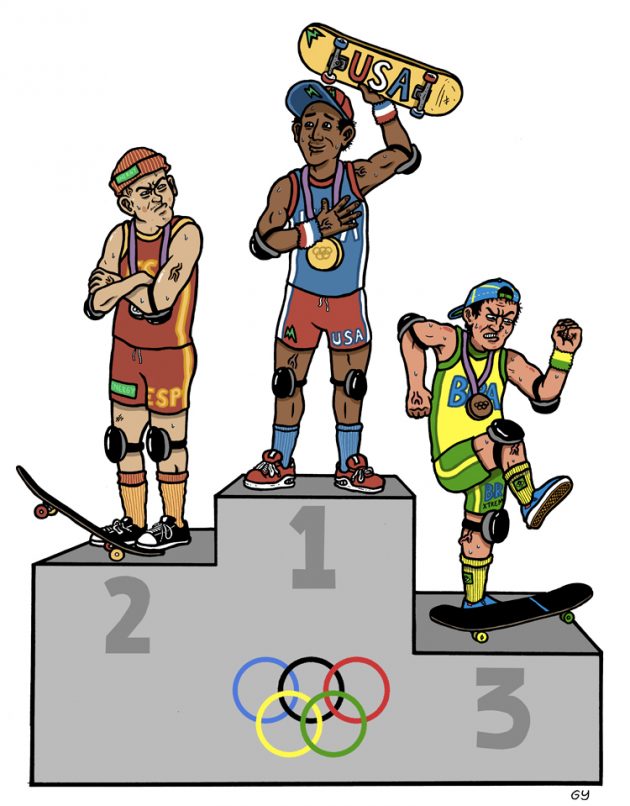 It’s now almost certain that skateboarding will join the 2020 Olympics, alongside surfing, karate, climbing and baseball. In the words of scandal-prone ancient lizards at the International Olympics Committee (IOC), these five new sports will, “offer a key focus on youth, which is at the heart of the Games vision for Tokyo.” And they understand youth as well as the next liver-spotted octogenarian.

Although the IOC are trumpeting this as, “the most comprehensive evolution of the Olympic programme in modern history”, most actual skateboarders could not care less. The 99% will keep on slappying curbs and talking shit, same as they ever did, whilst the elite drift away into a weirdly organised alternate reality for ambidextrous teenage millionaires.

But we would be naïve to think that grassroots skateboarding will be left unchanged when the minority join the biggest and most politicised sporting event on earth. This thing we love so dearly, for all its supposed anti-capitalist idiosyncrasies, will now be absorbed into the ultimate trade show of neoliberal excess.

Despite talk of ‘legacy’ and the unifying power of sport, the experience following London 2012 boiled down to former working class estates being cleared for forests of under-occupied glass and steel, secured by private security firms and funded by murky back-handers. Allegations of corruption around the 2020 Games are already coming in thick and fast before the preceding Games at Rio have even started, including a bribe to the sum of €1.3 million paid to the secret account of a former IOC member by the Tokyo Olympic bid team. 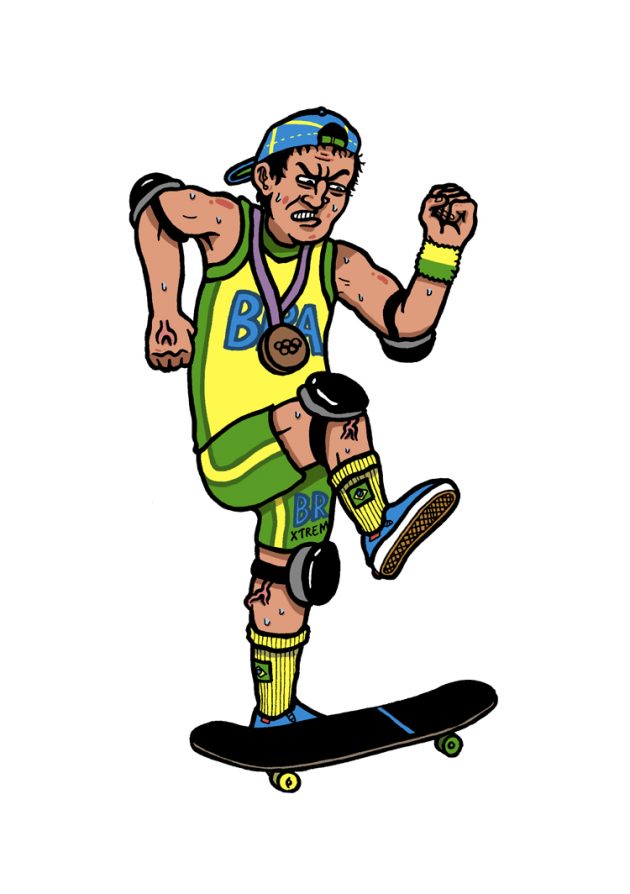 Then there’s the tendency of governments (both democratic and less-so) to see Olympic achievement as an exercise in ‘soft power’, an opportunity to antagonise rivals without launching anything shiny and explosive. Watch the panic if a Ukrainian skater racks up a higher score than their Russian counterpart, or a North Korean (or, just as frightening, an American if President Trump comes to be) falls hard on their arse whilst the camera pans across an undiplomatically giggling audience. Skateboarding succeeds more than many ‘sports’ in breaking down national, ethnic and religious barriers. Favourite skaters transcend patriotic allegiances. What if Lucas Puig is competing? How many will claim the most tenuous French genealogy? I’m from Lincolnshire, so I’m screwed, my ancestors resisted the Normans for generations.

If you’ve fought the boredom long enough to follow recent developments, the various bodies vying to speak for skateboarding are killing it in the acronym game. The International Skateboarding Federation (ISF) and the World Skateboarding Federation (WSF) cannot represent Olympic skateboarding because they aren’t IOC-recognised. Some dicks calling themselves the Fédération Internationale Roller Sports (FIRS) are, but represent rollerskating/blading. The IOC, being most reasonable Masonic survivors of an ancient alien civilization, have said that the ISF and WSF have to form a ‘Four Man Technical Commission’ with FIRS. The press release says “a yet-to-be appointed athlete representative is set to complete the group”, meaning maybe half of them will have actually stepped on a skateboard, but smart money would bet on them being 100% white, male and with a mean age of 50. The IOC will make their final announcement on whether skateboarding will be in the 2020 Games just prior to the opening ceremony for Rio this August, and then it will be for the Technical Commission to work out what this should look like.

So what good can come when skaters emerge blinking from subterranean tunnels into floodlit futuristic stadiums? Some real-as-fuck brothers and sisters have passionately made the case for three potential benefits. Firstly, the Olympics will raise skateboarding’s profile with governments, charities and corporate sponsors, resulting in increased funding and better facilities. Secondly, competing in the Olympics will lead to parity of esteem for professional skateboarding against both more established ‘action’ and mainstream sports, resulting in better sponsorship deals, wider exposure, and, consequently, increased grassroots participation as a generation of little kids get new heroes. Thirdly, as Lucy Adams said in her recent Sidewalk interview, if organised skateboarding wants to be in the Olympics, it has to treat female skaters better. This helped force Street League’s hand: “Street League needed women because that’s the ISF’s perspective of how a sport is going to join the Olympics… They needed us more than we needed them – no women, no Olympics.” The IOC have confirmed that the five new sports considered for inclusion in 2020 will have “equal numbers of teams for men and women.”

This is an opportunity to kick the persistent boorish male dominance into the long grass, but I have concerns with the other two arguments. Funding may come for new parks, skate schools and coaching, but with a very particular view of what skateboarding should be: something that takes place within a designated place, and for the primary purpose of nurturing competitive potential. In the aftermath of London 2012, grassroots sport quickly fell off the agenda. Then-Education Secretary Michael Gove railed against widening participation to “non-sporty” kids. Whilst cutting £162m from school sports partnerships, he argued that the goal for school sports policy should be international competitive success. 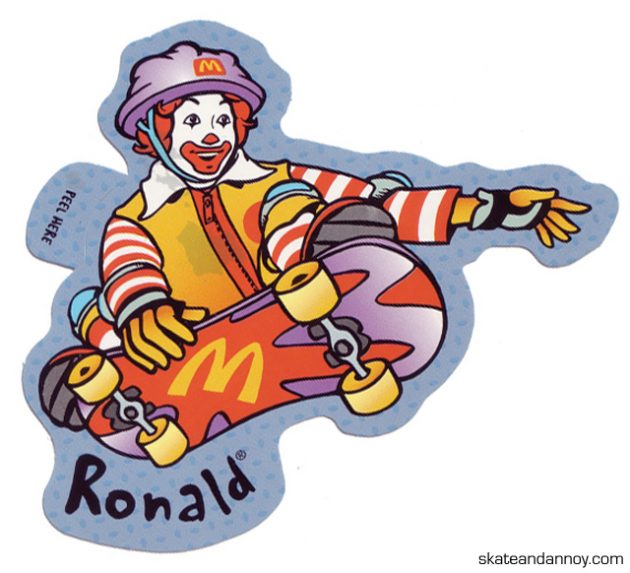 With this view still very much in place, projects will be favoured that funnel kids into ever more selective cycles of competition. Genuine street skating – the lifeblood of the culture – is unlikely to be looked on more benignly. The need for greater codification of ‘better’, in a way the general public can understand, risks turning back the clock to the bad old days where only hard tricks down big obstacles counted. At this time where anything goes tricks and fashion-wise, the balance could tip back more easily than you may think: kids play S.K.A.T.E by Berrics rules even on the flat-bottom of the smallest village quarter pipe.

People like me, comfortably surrounded by skate paraphernalia, need be aware of the privilege underpinning these anxieties – which can sometimes let off an unpleasant whiff of Western superiority. The skating that I love, with its deep, interlinked counter-cultural language of fashion, art and micro-brands, is a product of luxury. It is an embarrassment of riches to “meh” at a skateboarder for being “too good”, and then choose from a hundred tiny sub-strata to more closely meet our preferences. A kid in Paraguay or Liberia is unlikely to turn down a Red Bull or Monster contract because they’re too core or because that lime green logo is just too damn ugly. Several skate commentators have guffawed at the idea of countries that ‘don’t get it’ clothing their teams in matching lycra, to absurdly bumble through a misunderstood approximation of proper skateboarding. To say that a skater in a developing country won’t get it because of some inevitable ignorance is a crass example of what Edward Said called ‘Orientalism’ (a function of Western culture’s assumed superiority over the East). You only have to look at the faces of the girls and boys participating in the Skateistan and Skatepal projects to know that they ‘get it’ instantaneously, as does anyone who really gives themselves to skateboarding whatever their prior exposure to its sub-cultural complexities and unwritten rules. However much you dislike the idea of rich countries scouting pre-teen skateboarders to perform at superhuman levels, before being consigned, knee cartilage ground to dust, to a lifetime of TV panel shows and shopping-mall appearances, the potential for true internationalisation shouldn’t be downplayed. 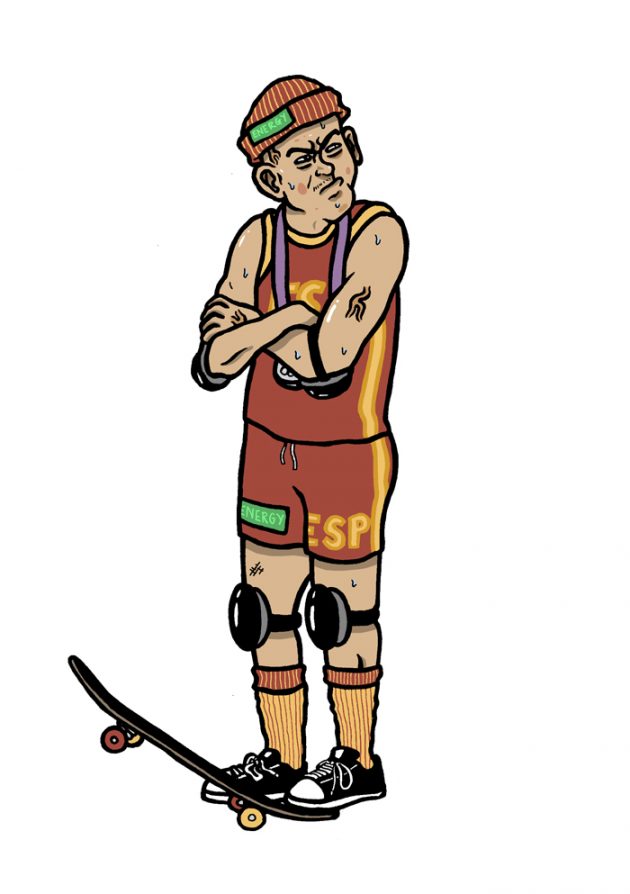 For those picked to represent their countries, the glare of an Olympic stadium is likely to increase their cachet, but to what kind of sponsors? The logos of bigger skater-owned firms like Deluxe, Girl, and even DC and Sole Tech are unlikely to adorn stadiums. Olympics sponsorship, including secondary endorsements in magazines, TV and online ads, is strictly controlled. In 2012, Coca-Cola, McDonald’s and Adidas paid £700 million for the right to be official sponsors. From this, monopolies are created and enforced. Just 15 brands are officially associated with Rio in 2016, including Coca Cola, Red Bull, Starbucks, McDonalds, Nike and lovable outsourcing specialists Atos (famous in Britain for their scandalous delivery and then abandonment of the ‘fitness for work’ assessment for disability benefits).

If you are worried, as many are, that the sportswear giants’ influence in skateboarding is already deeply damaging (read MIA skateshop owner and former Habitat pro Ed Selego’s interview for Skateboard Story), this is not going to help. For London 2012, when Adidas were the official sportswear sponsor, Olympics Chairman Lord Coe suggested ticket-holding fans might be turned away for wearing non-official sponsor branded clothing, although they would “probably get in with Nike trainers.” If Nike emerge as the sole sportswear sponsor for the 2020 Games, it may be very difficult for competitors (and perhaps fans) to wear branded footwear other than Nike SB. That will clearly have huge ramifications for forcing through a footwear monopoly in professional skateboarding that could take decades to disrupt. Carroll’s internet breaking interview with Jenkem on the timing of Marc Johnson’s jump from Lakai to Adidas indicated just how much pressure the bigger core brands like Girl are under from the ‘Big 3’ sportswear companies and their insatiable desire to dominate every market they dip their toe in. The ‘five year plans’ presented in those boardrooms are certain to include a sub-section on the Olympics as a tool for furthering market dominance.

Although the money may pour in up until 2020, Nike’s strategy with other ‘action sports’ – such as surfing and snowboarding (their surfing team were moved from Nike to its subsidiary Hurley without any notice whilst snowboarding was unceremoniously dropped) – raises questions about the longevity of this investment. Nike may currently prioritise skateboarding as one of their bespoke equipment markets, but this could quickly change in the fickle world of shareholder capitalism. Whilst Lakai, DC, Etnies, Emerica, Huf and even Vans (itself a massive corporation) will surely always have a strong skateboarding representation as long as they are trading, the experience of our new Olympics buddies in surfing suggests that this may not always be the case with Nike. 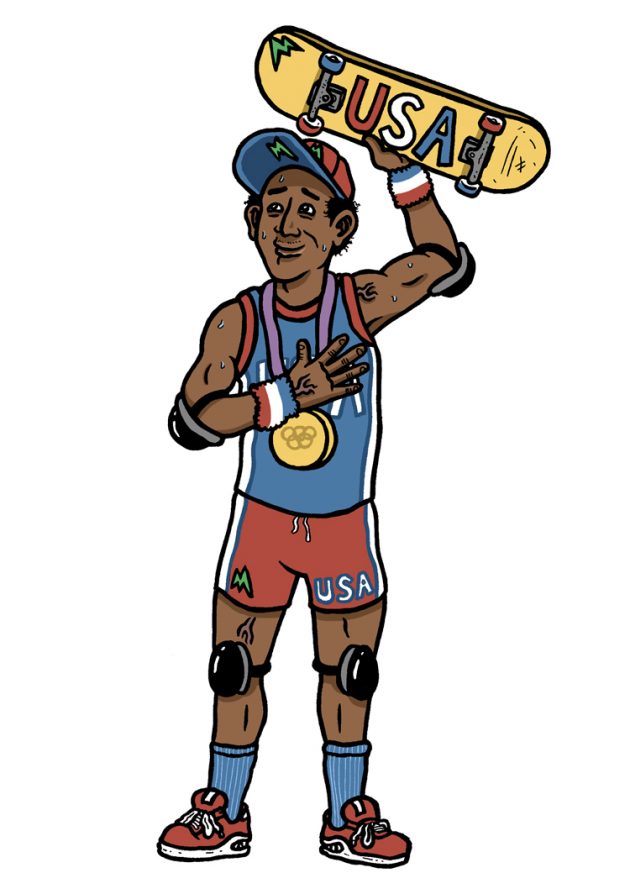 So with all that being said, it’s hard to shake the concern that many aspects of ‘real skateboarding’ are both fragile and intrinsically worthy of protection. This incredible combination of factors that have, at this time, resulted in the ecosystem indie companies (whether or not they are enabled by the sportswear giants in order to disrupt the bigger skate brands), DIY projects, an injection of weird artiness, and an appeal to all ages within a church that expands from creativity to performance.

All this is threatened in some way by the combination of mainstream absorption – with all the rules and expectations that implies – and accelerated commercialisation. Tony Alva, an early innovator for what ‘professional’ skateboarding could look like, said to Grey Magazine: “I would rather see it stay kind of rootsy and more soulful and artistic instead of go full commercial and be in the Olympics and shit. That’s just my personal opinion. I’m not really anti the Olympics, I just don’t think we need it.” Long-time Habitat and Adidas pro Silas Baxter-Neal in his latest interview with Free magazine, takes a more optimistic view – seeing the benefits of attracting more kids from all over the world. Although initially drawn to the competitive athleticism of Olympic skating, as they get older, a proportion of this new generation may move towards the “videos and the travel side of it and more lifestyle, art form of skateboarding.” Silas sees this side as more resilient than we may fear, even under the glare of the mainstream and all the “kookiness involved”.

We’ve got less than four years to sure-up the weak spots and to change the way we consume to more consistently support those brands that genuinely move skating forwards. Otherwise the summer-long festival of naff, jock bullshit could irreparably push skateboarding towards the mall brands and some kind of horrible numbers game. 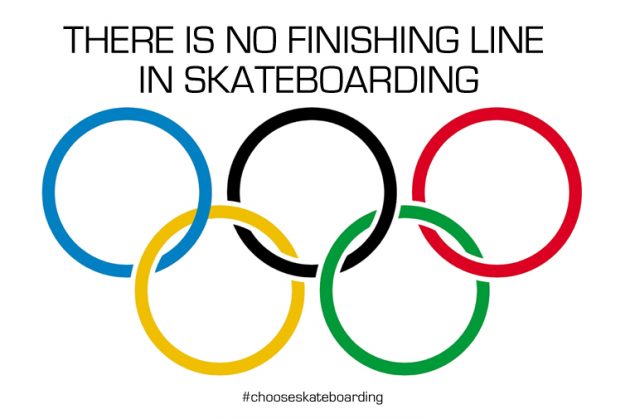