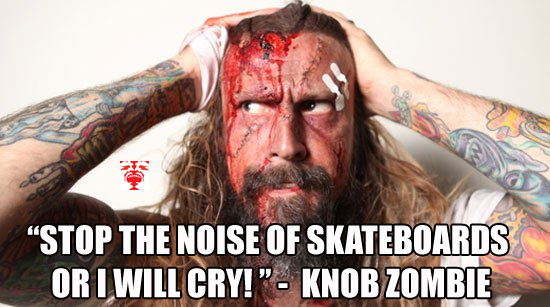 This week is turning out to be the the dumb musicians vs skateboarders week, where idiots are found talking shit online all over the web. This time, metaller Rob Zombie has apparently decided to whinge about the noise coming from a skatepark close to where he lives in Connecticut, USA and is allegedly campaigning for it to be shut down.

The kids of Woodbury campaigned to get themselves a park, it was built, and then Zombie allegedly comes out with an ‘it’s too noisy’ claim. He apparently lives on an 18 acre estate in a mansion and is possibly seeking legal action against the town. See the size of this ‘park’ and the full story here.

Mr Zombie has since tweeted: “For everyone commenting on this insane article about the skate park. Please do not believe the crazy things being said. No hate here guys.” There’s no smoke without fire, let’s hope this one gets put out sooner rather than later.