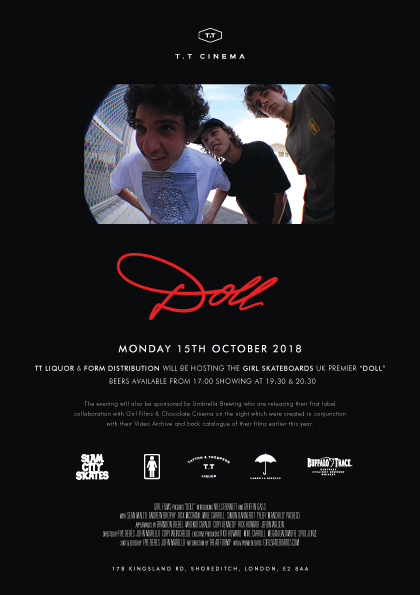 This coming Monday 15th October will see the premiere of the new Girl Skateboards flick in London. The latest production from the Girl camp is called DOLL and will feature a plethora of upcoming new rippers alongside established pros running at 30 minutes or so, in length.

The FREE screening will be held at at TT CINEMA in Shoreditch, so you can just show up from 5pm, get a seat and watch the film from the 2 screenings scheduled from 7.30pm and 8.30pm and others after that on a rolling basis in TT Liquors’ 57 seat cinema set up.

Those thinking about going down there will also get a free taste of the alcoholic Girl Ginger Beer made via Umbrella Brewing from 5pm, which a is a skater owned and operated independent brewery based in London.

Get down there and spread the word.