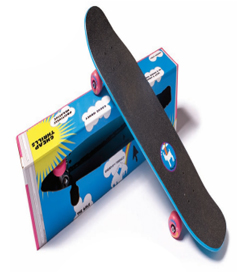 Cruisers are the shit. If you don’t have one then you’re missing out on something fundamental to skateboarding and the general notion of getting rad. Thankfully the good folk at Crailtap have released a new version of the Crailboard for both connoisseurs and noobs alike to get their shred on. You can see the deck in all its glory in the new Wallride Catalogue. Inside is an exciting page that simply reads ‘New Girl and Chocolate Video Coming Soon”. Now, we all know how ambiguous Crailtap are with dates but we’re stoked to be reminded of it none the less.

Cory Kennedy gave the stick a test-spin and you can see below in a rad little edit what’s capable on that badboy. Whether or not you’re as abnormally talented as Mr. Kennedy, this new deck looks like heaps of fun. On top of that, is that some sunshine we can see in this edit? One can only dream the UK will start bucking its current cloudy and miserable trend and get all happy and sunny again.