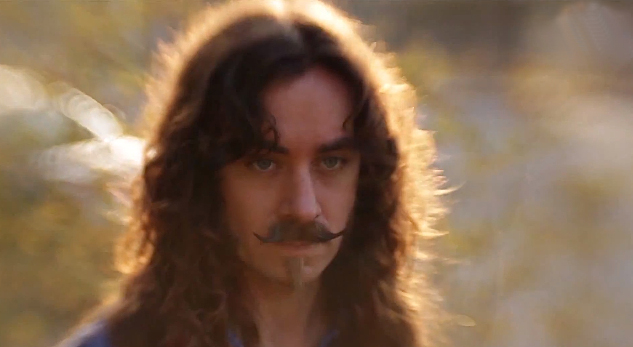 The talented Australian hippy they call Richie Jackson has been hucking out magical moves for many moons now bringing yet another dimension into the skateboarding world that some can only dream of and others can only hide from. 2013 saw Jackson at the helm of his own filmed production showcasing his pirate charms to millions across the interweb, ending with a brand new, full skateboard section simply titled ‘Promotional Film‘, where Jackson, once again, delivered and defined his vision of what today’s whizzplanking should be, with a firm nod to legends past.

These words below were exchanged just before Christmas in the same year that his UK board sponsor Death Skateboards are celebrating 15 years in the game, a feat in this day and age that needs to be applauded – run by skateboarders whose dedication to the scene is second to none.

Look back 12 months today and tell us where you started 2013?

I started it in Santa Monica having released a section toward the end of the previous year, and now I’ve just done the same thing again. Pattern seeking mammal.

So no trips back to the homeland then?

How much road tripping did you manage in that time, or did you get stuck in the LA vortex?

Almost none whatsoever. I got pretty settled here and was able to mine my immediate surroundings in a way that hasn’t really become boring. Technically Santa Monica is actually an entirely different city to Los Angeles. It’s on the coast and it’s actually really kind of un-hip.

Their pier has nothing on Brighton though in the UK, they don’t even have cockles and doughnuts mate…

Who do you skate with locally who pushes your progression daily? 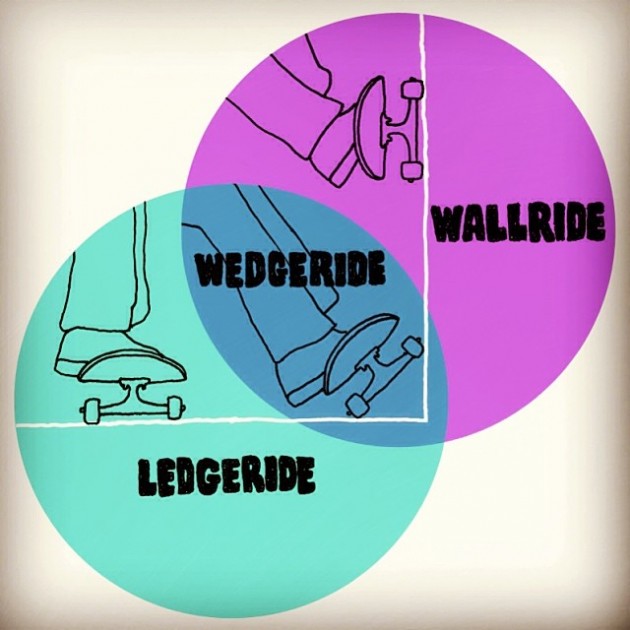 Did you learn much last year, as in life changing shit?

On the nature of life and reality I haven’t learned anything concrete and specific, it continues its exponential spiral of strangeness. I might have realized that the innate feeling we have which tells us that obligation and responsibility are important is completely illusory, and by understanding and re-programming the concept of “things that we have to do and why” we may be able to do far greater things.

So how does that theory pan out when deciding that kick-flipping edgers on walls will be your new latest jam? Do you even call them edgers?

That’s exactly what I’m talking about. My buddy Micah actually named that trick for me, he called it a “Wedge Ride”. Is that trick important? The answer is “Hell No” and also “Yes, Absolutely”. I once read an MC Escher quote which entirely sums up how I feel about skateboarding. “My work is just a game… a very, very serious game”.

So essentially you need to feel like you are winning from every full part that you release?

I’m glad you asked, and I want to go in-depth on this one because I’ve been thinking it for a while but never really said it. What makes me happiest of all is when someone watches my new part and I see them write “That gave me some new shit to try”, or “I learnt those after seeing this, they’re fun!” That might be the biggest driving force behind my skateboarding. I’m hearing a lot of disillusionment in people’s reactions to the Nyjah part, while I think it’s fucking incredible myself and I love it, it seems that seeing someone do stuff you will never, ever do leaves people feeling more insulted than impressed. People come away with this problem of relatability and a weird feeling of somehow being outright defeated. You can call me a douchebag for comparing myself to Andy Warhol now, because I’m about to. What Warhol did was obviously not as difficult as what had preceded it for thousands and thousands of years, but that was exactly why it was awesome. He was saying “Hey, check this out, anyone can do this. You’re an artist too.” What I want to bring to skateboarding is some new ideas that people can go out into the streets and try that day. That’s happiness and that’s what I’m about.

There’s nothing wrong with that..I think most people really appreciate it, it’s only the fashionista’s that are the skate police, your average skateboarder just enjoys being inspired by others who are talented enough to put something new down on tape. The amount of hatred on Huston’s latest part was pretty criminal, some of these people are the likes who wear sports shoes calling a kid out for wearing an energy drink hat. It’s essentially the same thing….there’s far too much irony going on right now. 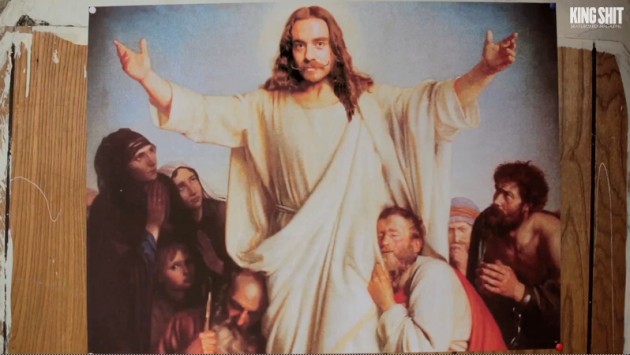 Oh, by the way, you a douchebag for comparing yourself to Andy Warhol…

I’d like to forget that I even compared myself to Warhol now if that’s cool, thanks. I should stick to comparing myself to people closer to my level of cultural influence and universal power, like Jesus.

Hahah! So, if Jesus is famous for feeding the five thousand, which trick will be the one that opens an ocean from Richie Jackson in 2014?

It hasn’t happened yet, but it’s called the Jesus slide and you can probably figure out how it goes.

Does it involve grinding people down into wars and taking ca$h money from millions?

Let’s talk about skating plant life, is that the most bush you got all year?

I think what happened is that I was starting to get a bit tired of the rigidity of concrete. The soft forms of nature have all kinds of physical properties that you don’t find in ledges and stairs. The natural elasticity of a bush was a very interesting thing to incorporate into skateboarding for me. When I first started trying the bush bounces I had no idea how the surface would react, and I would often miscalculate the thickness and just kinda fall right into it, or not put enough weight into it at all. By the end of the part I had figured it out and knew exactly how ivy feels and reacts in comparison to dwarf bamboo.

The Firecrackers obviously made a return too, which of these new ones made you work the most?

The tre-flip-out was a battle I couldn’t win for literally a number of years. Any filmer that came with me on any of my attempts to get one can vouch for that. It was defeat after defeat since about 2011. When I was filming for my Battle Commander I was actually super apprehensive to try to film one down the seven because I was so familiar with how that particular battle always seemed to play out. Chaz Ortiz was there that night when I decided to start trying it and he started really backing me on it. This is the brilliant thing about the Berrics…the spectrum of dudes interacting with each other in that space is nothing short of experimental. Chaz Ortiz decides to go up the street, buys me all these giant bottles of water and keeps cheering me on to get it which somehow made it possible. After I made one they weren’t a problem any more, and I have Chaz Ortiz to thank. Hahahaha!

How many sessions did it take to get that Battle Commander section nailed?

I have no idea, but while I was working on it I had kick out privileges. If I wanted the park all to myself, I just had to say so. I had Chase kick out Sewa Kroetkov once. I still feel guilty about that. Sorry buddy.

Was there one particular Firecracker trick that got away?

Yes, but if I tell you what it is, it won’t be a surprise in the next part. 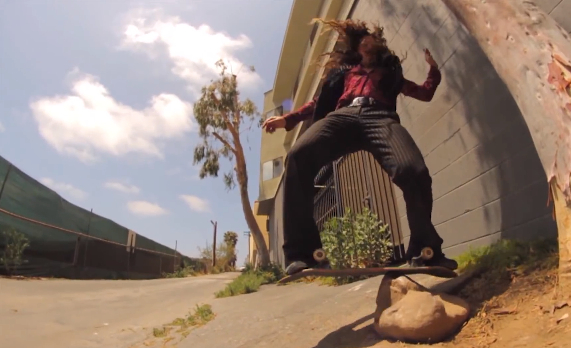 Any other tricks went down that were filmed but didn’t come out perfectly?

Yes, plenty. If I don’t do something perfect I don’t use it. I’d rather just do them perfect and put them out in the next part.

Do you feel more comfortable skating more tech stuff on the ground these days rather than destroying yourself on bigger stuff like stairs and escalators?

I’ve seen enough terrible things, and I love skateboarding too much to be too injured to do it. I’ve chosen my path.

Fair enough. So, are rocks the safer bet then?

It’s a return to cosmic fundamentals. The universe we inhabit is a whole lot of rocks and gravity. It trips me out how mundane most meteorites are to behold with your own eyes. Makes you realize every rock is a goddamned space rock.

I see you paying homage to Natas on those, how many times did you try pulling that Satan Spin without touching the wall?

The Satan Spin is completely doable without touching the wall, I touched it intentionally because Natas grabbed the street sign on the first and greatest Natas spin. It’s not a necessity, I just think it’s cool. It could make any trick cooler. Imagine if someone frontside flipped a 16 and hi-fived a wall midway through.

I don’t reckon you could do it pal. I reckon your bum went and was seen legging it down the 405 freeway en route to Mexico…

Not this shit again. When I did the escalator slide somebody whinged that I couldn’t do it without touching my hands on the bannister, so I went back and switch ollied in and never touched. You think that dude called me up and told me everything is all good now? The love for complaint sometimes runs deeper than the actual problem people have with things. 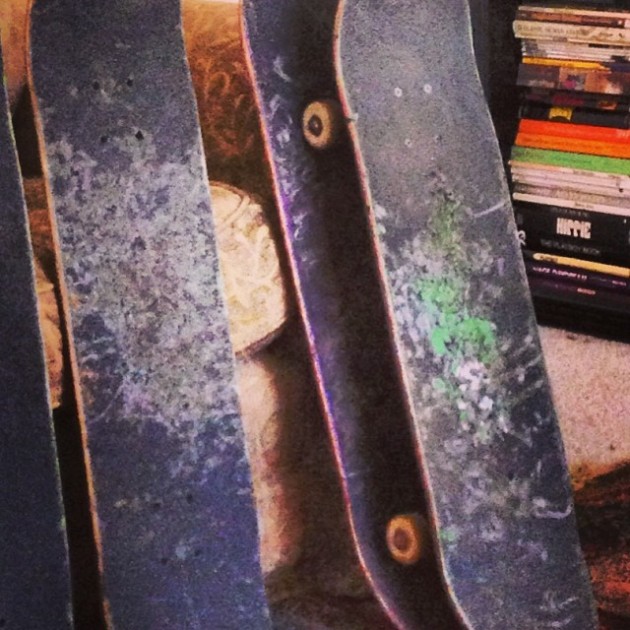 If the rules are there to be broken on a daily basis, where does skateboarding shift to next in your opinion?

I’m not sure, lately I’ve been thinking how absurd it is that we assume one particular incarnation of skateboarding has to be the dominant one. Street League is happening, Vert is happening, Creativity is happening. It’s all skateboarding and it’s all going down. It doesn’t have to be survival of the fittest genre. Every faction has it’s appreciators.

And lastly, it’s the 15th Anniversary of Death Skateboards which is a huge feat considering many skate co’s start up and disappear – what makes Death so attractive to you?

That’s it huh… You can’t kill Death itself. What makes it attractive to me is the complete and total creative freedom that Nick gives me. Whatever I’ve wanted to do, he’s encouraged it. In the skate industry that’s about as rare as it gets.

For more interviews and daily skate shit, join the Crossfire FB page. Enjoi’s Ben Raemers is next up.