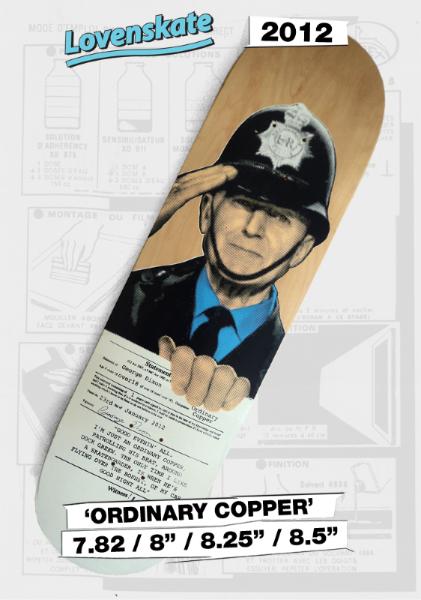 The good fellas of Lovenskate have a new, limited edition deck series out this week dedicated to the fuzz. Fronted with a photo of classic TV rozzer Dixon of Dock Green, a character who hit British TV screens in 1955 and became a BBC favourite until 1976, the new deck comes with a true story and one we can all relate to. In Stu Lovenskate’s own words:

“So, not too long ago, we were out skating the city, and we got the boot from the cops, the usual. They were pretty nice about it too, until we thanked one for being cool about it, to which, he announced, ”The only time I like a skateboarder, is when he’s flying over the bonnet of my car”. NICE!

This new board graphic is now available from the Lovenskate site in various sizes and of course, printed in the UK. Get them quick.