“Growing up skating in Swansea in the 70s and 80s was a really special experience which I shared with a bunch of great guys. We were pretty relentless in our pursuit of good times, traveling all around the country to skate parks and ramps, building our own and sharing the stoke through the media of writing, music and photography. The history of skating in Swansea is really about two things: the kids who were part of the scene and made things happen, from the surfers who had adopted skating early on to the street skaters who saw the city in a new way; and the places that skaters met, starting with Langland and ending with Exist.

Jono Atkinson is responsible for putting this film together. He contacted me early on and I knew from our conversations that he had a really good handle on the key people and places. Doing the interviews and looking through the footage brought back a lot of memories, but I think that the most striking fact was that so many of the interviews corroborated the others – although some of these events took place nearly 40 years ago the impact of the experience was such that we all remembered things in the same way. The fact that I had a part in a sort of collective memory was something that I hadn’t properly realised or appreciated until I saw the film. Over Ply Wood‘s greatest achievement is the collating and organising of the archive material and interviews in such a way that those who were there have the opportunity to relive their youth, whilst those who weren’t can get a good sense of what happened and why.” – Twiss Enwright

It was a pleasure to premiere this documentary but you will now have to wait for the DVD as it was for a limited period only. Until then, read all about the making of it with Jono Atkinson who has put so much work into it. Here’s the background of how this all came together:

Hi Jono, we have seen this flick form from a small web clip to what is now a full length documentary, how did it all start and how long has it taken to stitch together?

Making Over Ply Wood has been a long process. Over three years in now and i’m still adding to it. It started when I moved down to Swansea and ran into Tomsk (Ian Thomas) and Jason Williams at the mini ramp near my house. We became friends and I slowly began to hear stories about the ramps they had built over the years. I had seen pictures of Morfa in Rad and Skateboard! Magazines but never made it down to Wales at the time to see it for myself.

That ramp was legendary, how did it come about?

It was the result of years of building ramps and hassling the council for money and a location. Tomsk, Jason and a crew of many other skaters and surfers who made Morfa possible and it was great to hear how it all happened.

Twiss gets handy on the infamous Morfa vert ramp. Photo by Sam Scott-Hunter. 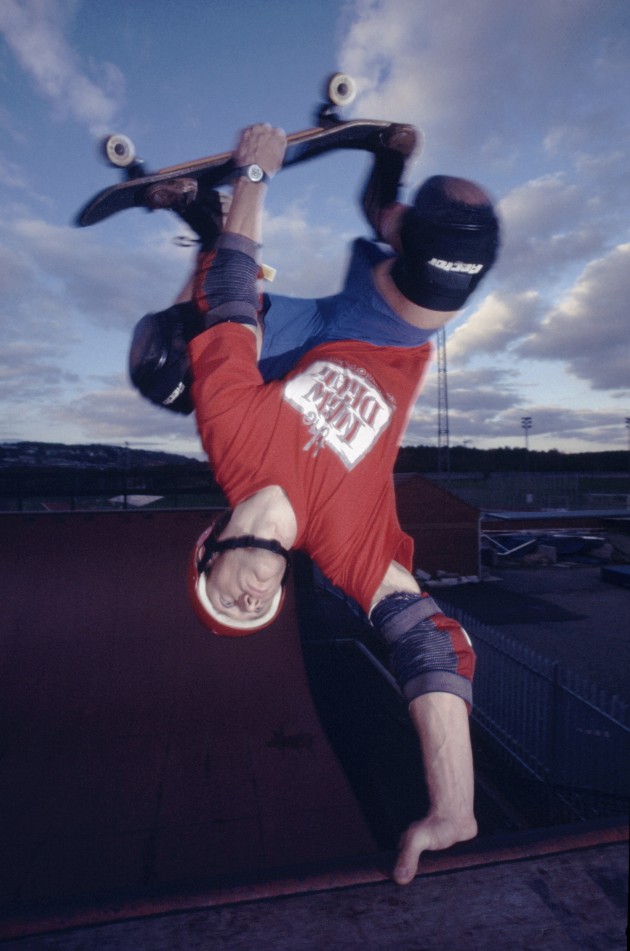 Who was sitting on the majority of the archived footage?

Tomsk had videos of sessions and contests from the 80’s that he filmed himself. Borrowing and watching these was the beginning of the film for me.

Knowing that it’s your first film, how did you manage to contact everyone and put it all together?

I learnt about editing and sound and interviewing as I went along. Everything was built from scratch in the early days and this is reflected in my approach to making the film. The material is all begged and borrowed and stitching it all together and making sense of the bigger picture was the best part of the project. One thing led to another as I met new people. This guy has some photos, that guy has some more footage, I know someone who used to go there and knows someone in Australia who might have some cine film of that spot.

It was a real slow build up but eventually I had amassed quite a large collection of material spanning from the 60’s to the present day. I used Facebook to make a page which has been a gold mine of photos and video which has gone pretty much unseen for a long time. 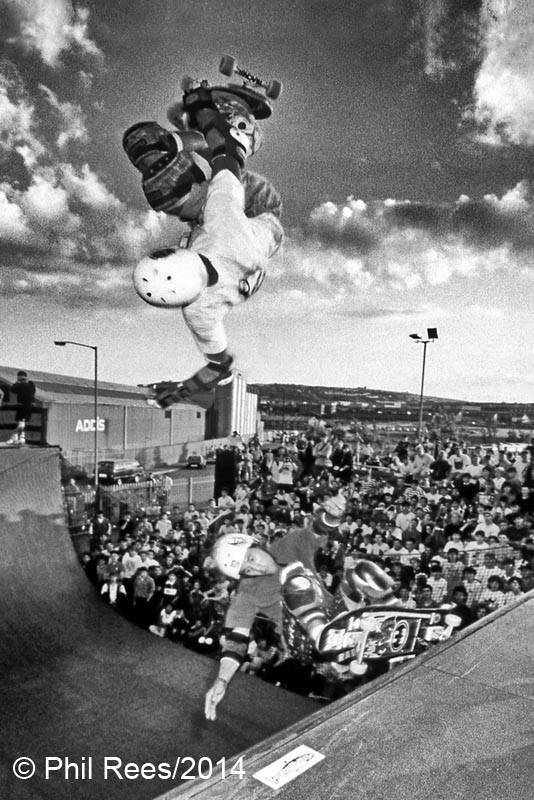 What about the process of choosing what content went in?

One of the main problems has been knowing when the project is finished as more material keeps turning up! I decided to get the interviews done and edited and the story told and chat would be done, the story as far as the film goes is written but material can still be added until the technical details are all ironed out for the DVD to be finally made.

Keeping the story concise and flowing has been hard work and I decided early on to stick to a few key figures who drove the progression of the Swansea scene over the years. There are so many people who skated the ramps, locals and visitors alike but I kept with the central crew who built the ramps, organised the fundraising and later on found new spots. The film is already long at over an hour and a half and that was being harsh with the edit. It could easily be four hours even with the material I already have. 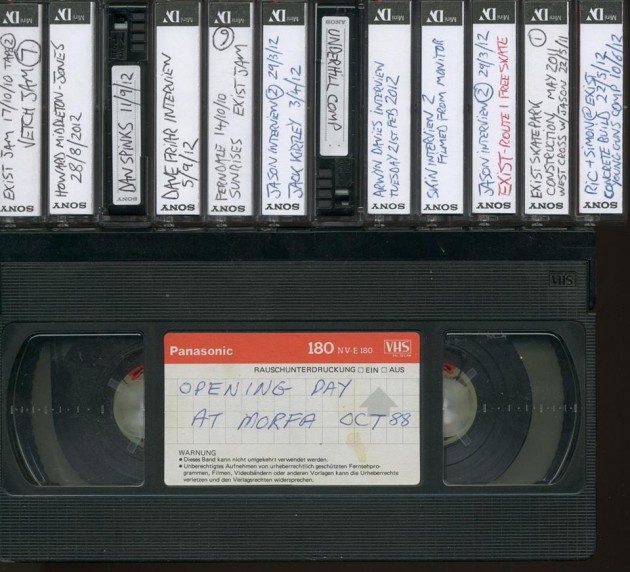 Will the film make it onto DVD in the future?

Since the film reached a watchable and nearly complete form I have been doing a series of screenings around Swansea. A couple in a cafe down in Mumbles, once at Exist skatepark and most recently in a pub back down in Mumbles. It’s been a great way to get the film shown to the people in it, make adjustments to the edit after seeing it big on the screen and getting some opinions on how it looks. It’s also been a good way to raise a bit of money to get things done leading up to a DVD release. I managed to get enough money through a raffle at the last screening to pay for the audio to be professionally mixed which is something I had no idea how to do. I want to do the same with the colouring maybe…..so it’s getting closer to being a real film technically.

Looking back what have you learnt overall from this mission?

It’s been a great experience and I have met so many cool people from Swansea who either still live here or have moved away but still hold the local scene close to them. The film keeps evolving and getting built upon just like the skate scene here in Swansea, never ending! There will be a finished DVD pretty soon but I think I am enjoying making the film too much to let it go yet, in the meantime here is the film as it stands so far. I hope it can dig up a bit more material, I know there is stuff out there. Enjoy Over Ply Wood! 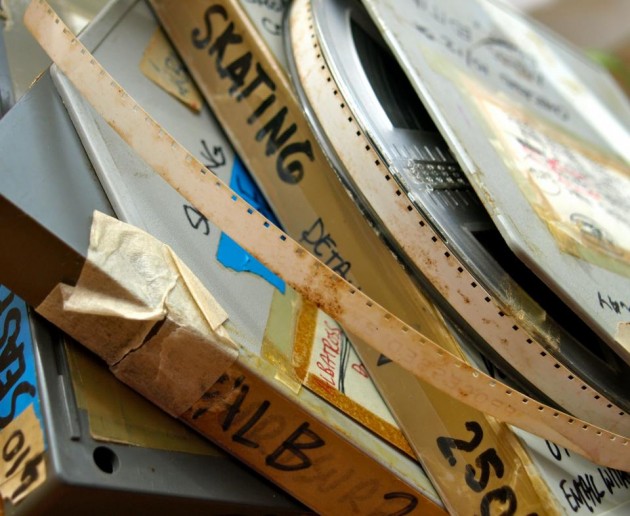 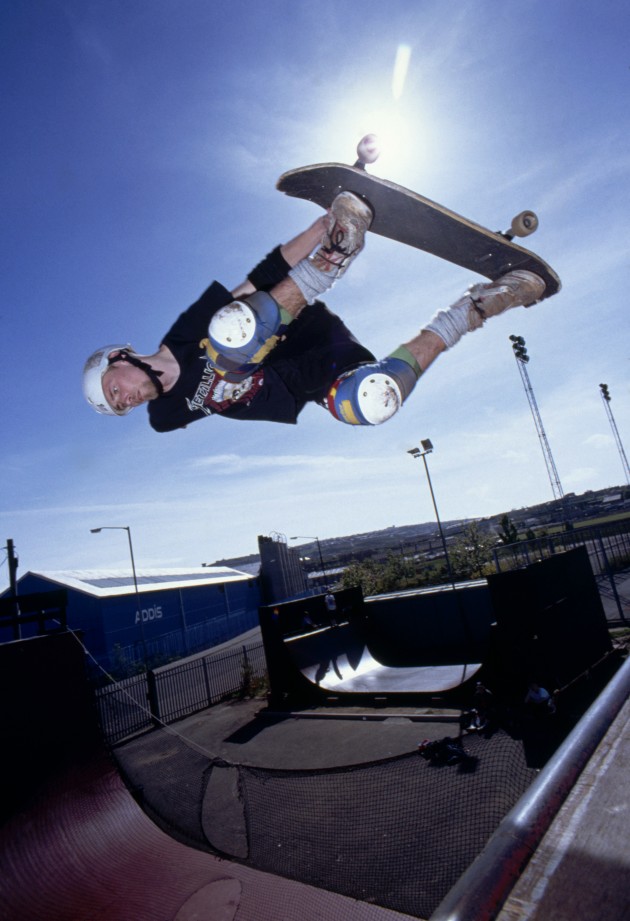 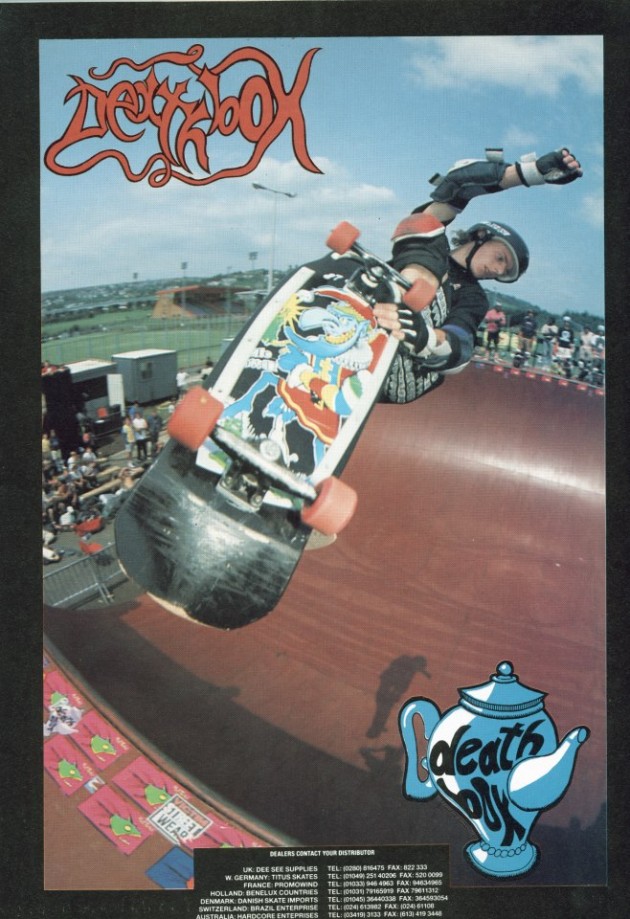 Chris Miller lofts a frontside ollie at Morfa to take the cover of Skateboard! Mag. 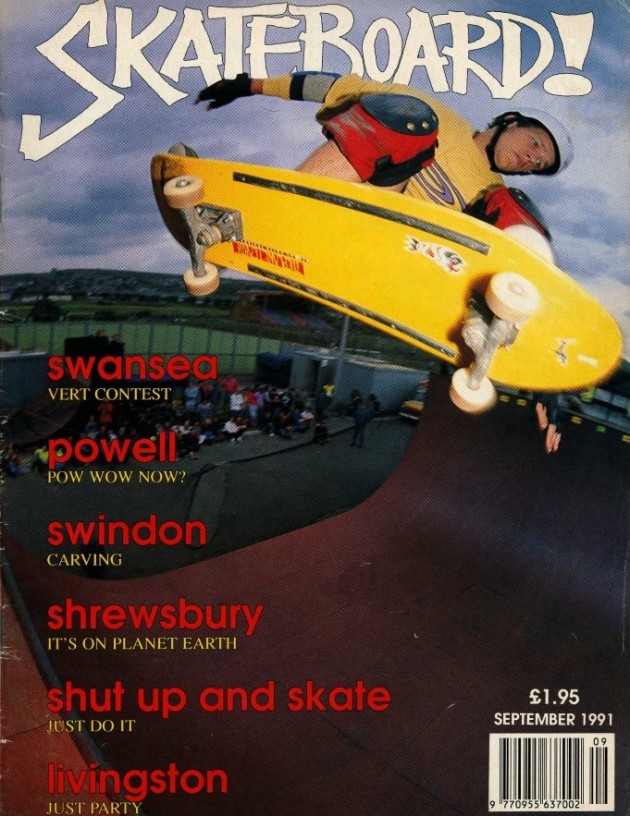 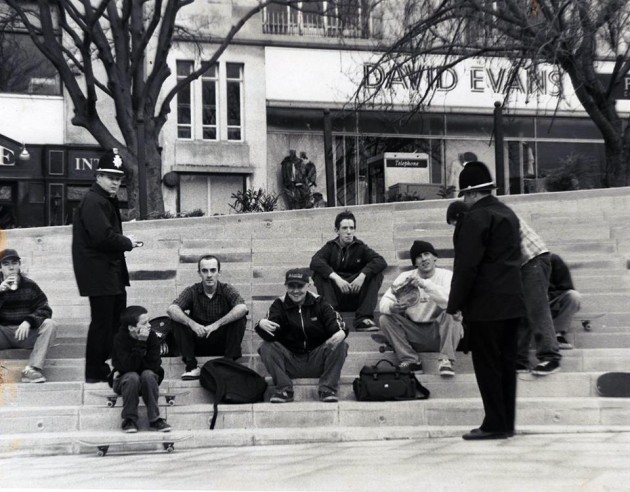 This premiere will be live for a week on here. Look out for the DVD that will be available at some point. Until then follow Over Ply Wood on facebook.

Following our recent features on Crystal Palace vert ramp and Hastings skate scene, our next Rewind feature looking back to classic UK skate spots will focus on the life and times of Latimer Road vert ramp. This will include tales from Jeff Grosso, Lance Mountain, Shane O’Brien, Ged Wells, Davie Philip, Joe Johnson, Dan Adams and many more alongside unseen photos of Gonz, Lance and more. If you are reading this and would like to contribute, please get in touch asap here.