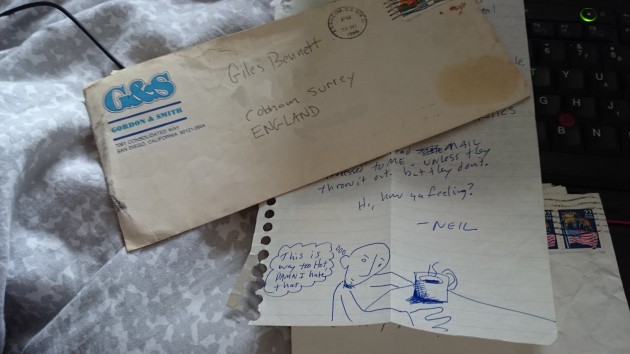 Meeting your skateboarding heroes back then was pretty much impossible if you lived in Thatcher’s grey and rainy Great Britain. Communication was jacked. There was no facebuck, twatter or instagrom, just PO box addresses on adverts in magazines, phone, fax (if you were tech) and the good old-fashioned letter.

In this first of two features Giles Bennett explains how these rare letters from Neil Blender came about. Look out for part two here soon where Neil joins us to revisit them, discuss the demise of Alien Workshop, art and more.

“You don’t expect these things to be around anymore. Paper gets old and silver fish take over. I have gas and electric bills from 06. I need to get rid of them…” – Neil Blender

“A funny thing happened today and almost quite a timely juncture. I was ferreting around in some of my old shit whilst under the bed, and I rediscovered some old letters from Neil Blender amongst the Garbage Pail Kids stickers and gig tickets.

Neil was always a kind of peripheral figure on the skate scene at that time. He would appear in magazines and was a capable skater, (pro for G&S) but seemed more of an “outsider”, goofing around, spraying walls in comps and coming up with peculiar, unique tricks. 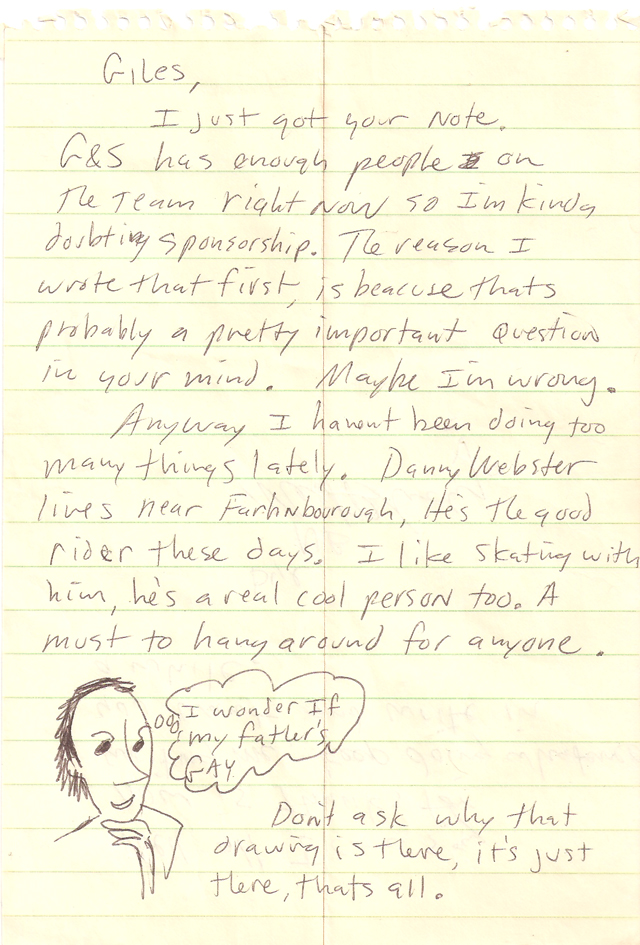 Set against an emerging background of Gator and Hosoi flying to the stratosphere and hordes of screaming kids baying for stickers and McTwists, he seemed like the kind of person you would actually enjoy going for a skate with. Me and my best mate at the time were always more interested in making ridiculous wobbly ramps and doing “roly poly plants” than perfecting the biggest ollie. He was a kindred spirit. So when thinking about correspondence he was the only real contender.

Living in a small parochial suburban British village in the mid 80s, the nearest we ever got to skating royalty was the occasional guest at Farnborough’s vert ramp – if we ventured that far out into sniper territory. No email, no real videos at THAT time. Skateboarding in the USA was something mysterious, exotic and out of reach. The only way to reach out across the Atlantic was via a bit of paper, a couple of stamps and some hope/patience.

As a kid, I’m not really sure what I was reaching for. Maybe I just wanted to prove that the world in my tattered Thrasher’s and Transworld’s did actually exist. I can’t remember exactly what I wrote, I probably asked how he got sponsored, if he had been to the UK, probably said he could kip on my floor if he was in the area. Not sure exactly how much fun he would have had in Cobham ollieing into bushes with proto-teens, but the offer was there. 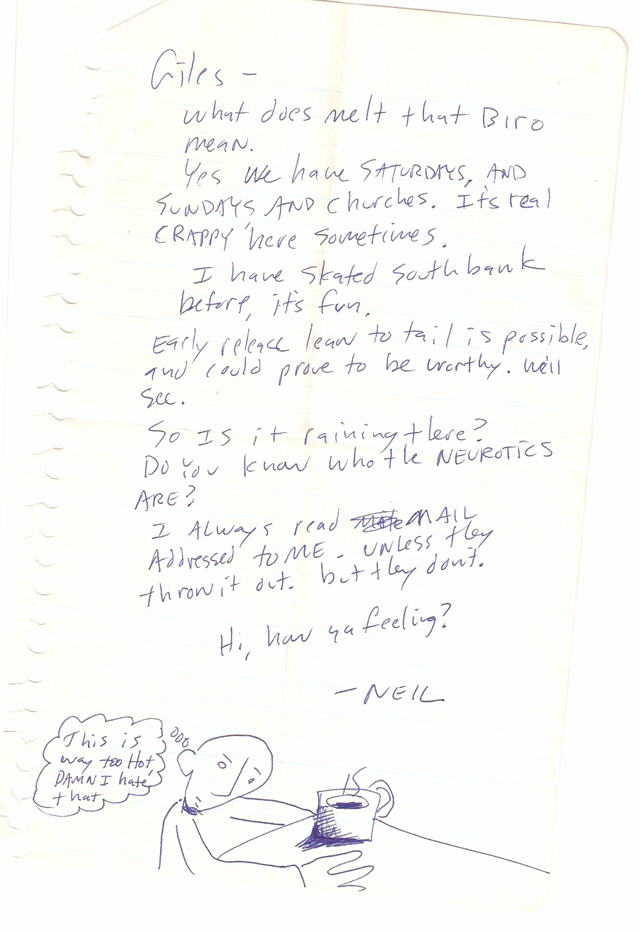 Letter number 1 was written, put into an envelope, then placed in a little black hole in a red box. That little hole may as well as well been a galactic black hole. I had no evidence that something as flimsy as a letter even got to the other side of the ocean, let alone directly into the hands of a goofball God.

Summer went and I had forgotten, given up hope. Then, as we were all about to head into 1987, something magical happened; Mum uttered the line: “There’s a letter for you here.” What?

Perhaps it was some belated Xmas card from a tardy relative? Venturing downstairs, I saw it on the kitchen table, an envelope with G&S stamped on it. Neil had come good and replied.

He had actually spent time to write back. Time that he could have spent rolling along warm Californian concrete, or eating some amazing unheard of fast food brand instead of putting pen to paper to a scrawny, pasty English kid who lived in a village with just a butchers shop and a cobblers.

I followed up with 2 more letters and he still came up with the goods. I’m still impressed with the guy now for doing that.

There aren’t reams of dialogue; it wasn’t war and peace, just a few lines providing insight to that world, and this small connection to it, here in my hands. As a bonus he added drawings in 2 of them. I liked them, they were kooky. The content wasn’t really the biggest deal for me anyway. It just meant I connected across a vast expanse, to someone I respected. That in itself just seemed amazing. 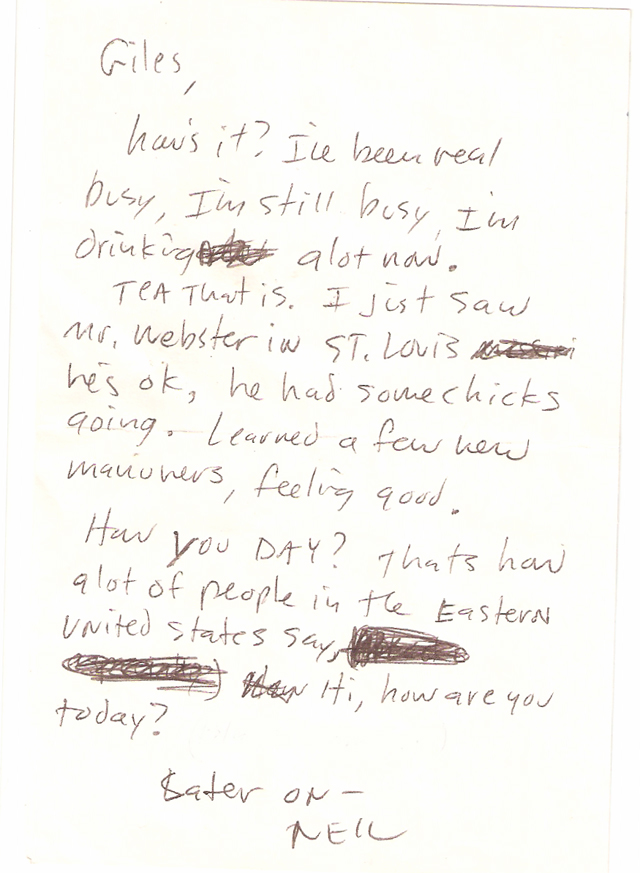 I googled Neil after I found these letters and discovered an interview with him. In it he described how he seemed to get disenchanted with skating when it got lumped in with rap, became a kind of freestyle based “flippy tricks” activity, and the kids got more bitchy and competitive, lamenting also, the loss of characters. Funny, coz that’s basically the reason I turned my back on it. It didn’t feel the same anymore. Small wheels, flippy tricks, handrails, baggy clothes and big beats wasn’t my scene. Southbank was a sea of kids standing still kick-flipping, I was a roller.

The kid that wrote to Neil, also optimistically wrote to the council asking for a skate park. 20 odd years later, he got one. I was even invited to the opening of the Cobham park as a guest of honour so right now I’m now starting a campaign for a wheelchair park, so it’s installed when I’m 90.

The scene seems broader again now and I’m seeing retro decks everywhere (I have a Vision “Old Ghosts” finally). I also have a shiny new concrete park in the new town I live in too.

Skateboarding was surrounding me, teasing me, beckoning me to have another go.

But, I’ll be out there again though, when the kids are all in bed, on the smooth concrete pulling “roly poly plants” and doffing my tweed dog walking cap, to the odd man of boarding. Mr Blender.” – Giles Bennett 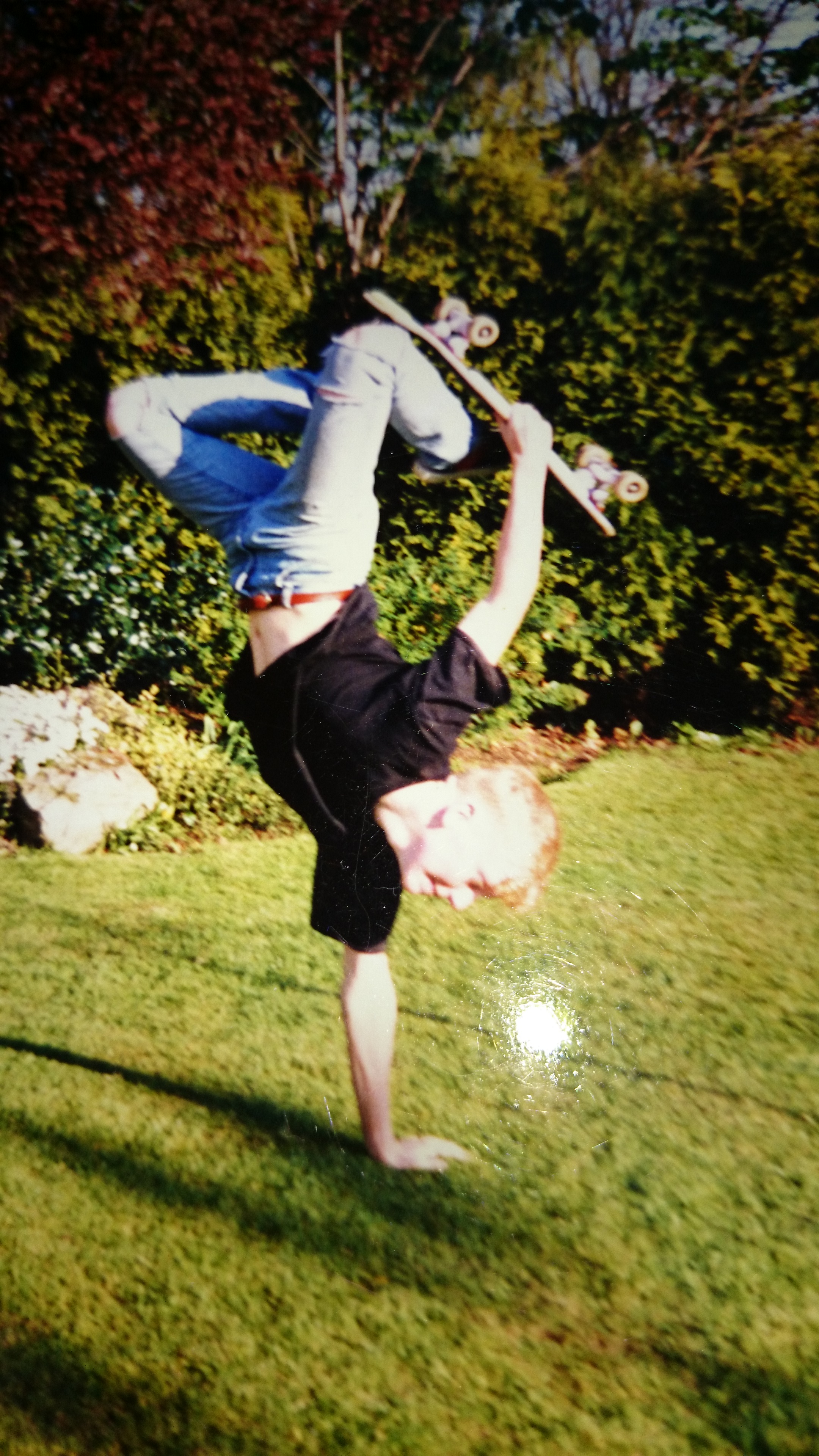