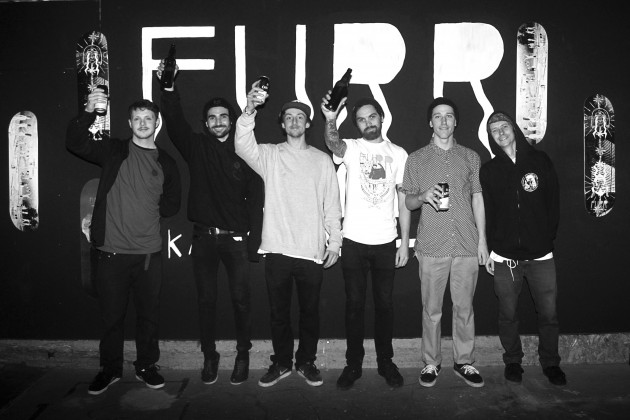 The Welsh are celebrating the birth of a brand new skate co this month, so knowing that traditionally their boyos are graced with arguably the most supportive blood in the country, we decided to delve into the world of Furr Skateboards this week to find out what two Swansea lads and a bunch of artists were up to and why.

“Formed by Tom Frayne and Rhys Pillai, the company bases itself upon a DIY ethos united with an artistic focus. It seeks to constantly collaborate with different artists to provide a platform for emerging talent in a meeting of creative design and function. The duo screen prints all of their own clothing, providing them with the freedom to regularly produce new and varying designs. Furr as a brand was formed to advocate and uphold the fun and creative side of skateboarding and skate culture. By working with as many artists as possible, they hope to offer the skate community something unique and exciting which can stem beyond the standardised logo fan and instead ignite a following of the cultured and visually aware.” – Amy Beasley (FURR photography artist)

Hi Tom, Rhys, congrats on the launch, tell us a little history about your backgrounds in skateboarding.

Tom: I picked up my first board when I was 11 and have been rolling ever since. I first saw a skateboard as a fast way to travel to my Nan’s house for chocolate. I’ve also worked in local skate shops since I finished school and still work at Exist Skate store in Swansea. There’s nothing better than chatting to all the young gun shredders in your local town, whilst in work, and hearing all about the new spots they have been tearing up. Just seeing them so enthusiastic is inspirational.

Rhys: I started skating round the same age, but slowly stopped as being in a band took over my life, getting injured being a drummer wasn’t ideal. When I was 18, I started screen printing apparel for a local skate shop. So thanks to that I was still pretty involved with the skate scene in Swansea. 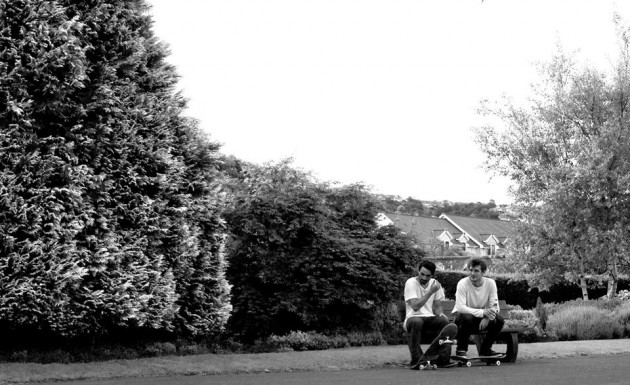 Swansea is drenched in skateboard history, what is your earliest memories of skateboarding from legends past?

Tom: I was too young to really see a lot of the legendary skateboard history Swansea had to offer. Cwmdu skatepark was still around when I really got into skateboarding though, it was a great skatepark. I got to see a lot of my idols at the time skate there, like Rick McCrank and Eric Koston. My good friend Jono Atkinson recently released a documentary on the whole of Swansea’s skateboarding history, called ‘Over Ply Wood’ (premier on CF soon). It completely opened my eyes to how skateboarding evolved in Swansea and to be completely honest is probably the reason I’m here writing this now. It pushed me to try and help keep the skateboard culture we have in Swansea strong.

Rhys: My brother and his friends used to skate, so being the younger brother I’d want to go with him. We used to go to the old Morfa vert ramp to watch people skate. Len, the owner of Cwmdu skate park lived round the corner from me, so once school was finished for the day we would all be up there. That skate park at the time was a really big thing for the city, it was a huge shame when that place had to close. I was also blown away when I saw ‘Over Ply Wood’, as it taught me so much about Swansea’s expansive skateboarding history.

There’s no time like your very own Beer O’Clock. Ph: Lewis Royden. 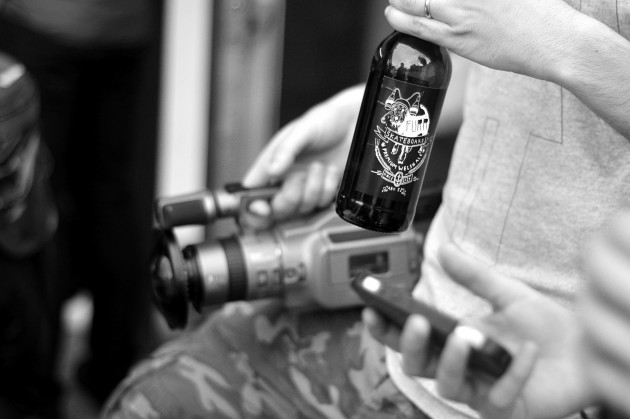 Explain the name Furr and why you settled on it…

Tom: We wanted to create a new word because it didn’t have any other connotations other than what we are. We hope the new word is as innovative as our designs. We hope they’re a Furrst. Furreal.

What other names were considered?

Where are you sourcing your wood?

Tom: Our wood comes from some cool guys in Spain. We looked into a lot of different options of which wood to go for and narrowed it down to a few factories in the states, UK and in Europe. Knowing that the brand of board I was riding at the time came from the chosen manufacturer, it was a done deal!

Was Chinese wood an option?

Tom: Never, I would hate to think of the labouring conditions and wage the factory workers would get in that environment. But hey, maybe the conditions are great out there, I just don’t know!

Any other companies use the same wood you are using?

Tom: I know of a few companies in the UK that do use the same yard as we do. I can’t name them as it takes a lot of time and patience scouting out a great wood source. 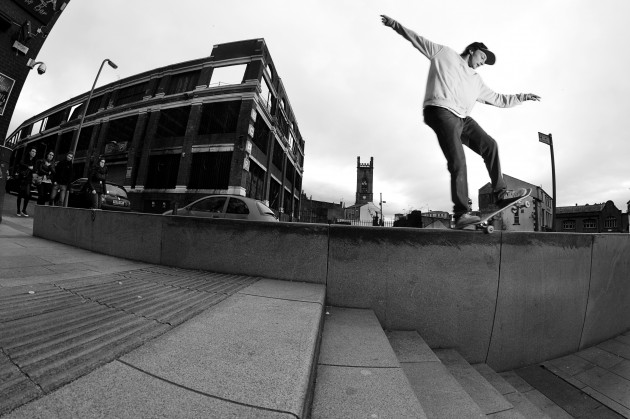 How did you pick the team?

Tom: The team are the best bunch of dudes! I’ve been skating with Sam and Tommy for while and they always shred so hard. It’s a no brainer having them on the team. I used to love watching Mikey’s parts growing up and still do, he’s a real inspiration. Danny and Josh are great, they’re both so enthusiastic and keep dropping amazing edits. There is also another team rider dropping soon, so keep your eyes peeled!

Are the riders involved in the shapes?

Tom: Every rider has a say in what shapes they want to see and ride. If you ain’t comfortable doing something, don’t do it. Same goes for shapes, every rider needs to ride what they feel most comfortable riding. Keeping them involved is key. 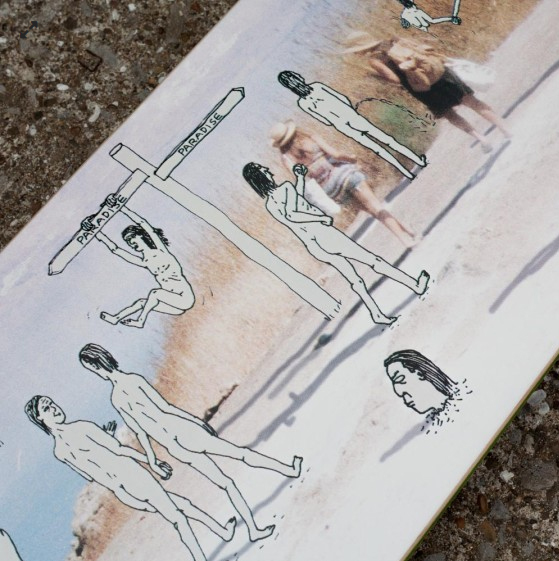 Artists will obviously feature heavily in the progression of the brand, talk to us about aesthetics and how you see your graphics moving forward from this launch.

Tom: Artists are such a big part of Furr. There are too many artists out there that are so good at what they do and we feel their work is not showcased enough. By collaborating regularly with new artists we feel our designs will look fresh and innovative, and it will give a platform for new artists all the time. Our intentions are to try and uphold and advocate the fun and creative side of skateboarding and its skate culture. We will collaborate with as many artists as possible to bring the skate community unique and exciting design work behind all of our products. We aim hold exhibitions for the artists for the work they do for us, and for their personal work too.

The Welsh have always offered something fresh, how will Furr get amongst it knowing there are so many UK board companies out there right now?

Tom: By evolving our designs regularly we hope to stand out. Supporting events all around is also a major thing we hope to achieve. We want to keep good vibes flowing and hopefully people will show support for DIY.

Tom: Supporting any DIY, skater owned company is essential in the UK skate community. There are so many major corporations buying their way into skateboarding these days and a lot of the hard working smaller brands struggle from this. Everybody needs to get to their local skate shops and support the hard work they are doing to keep the DIY culture alive. Watch this space. 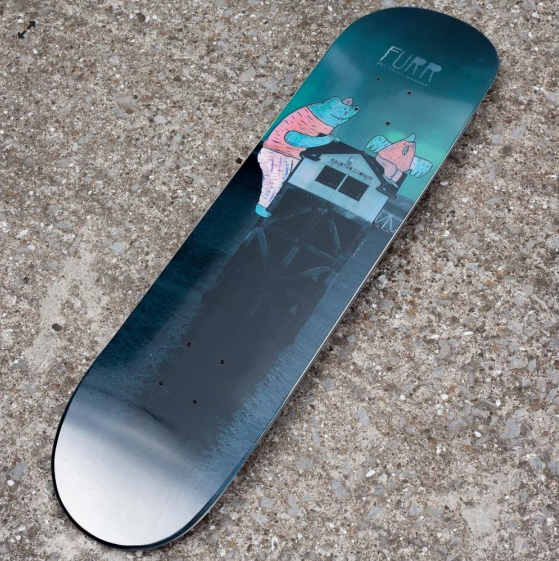 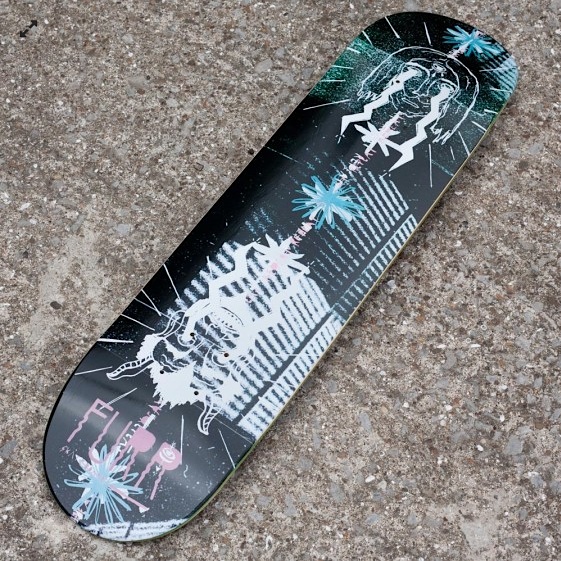