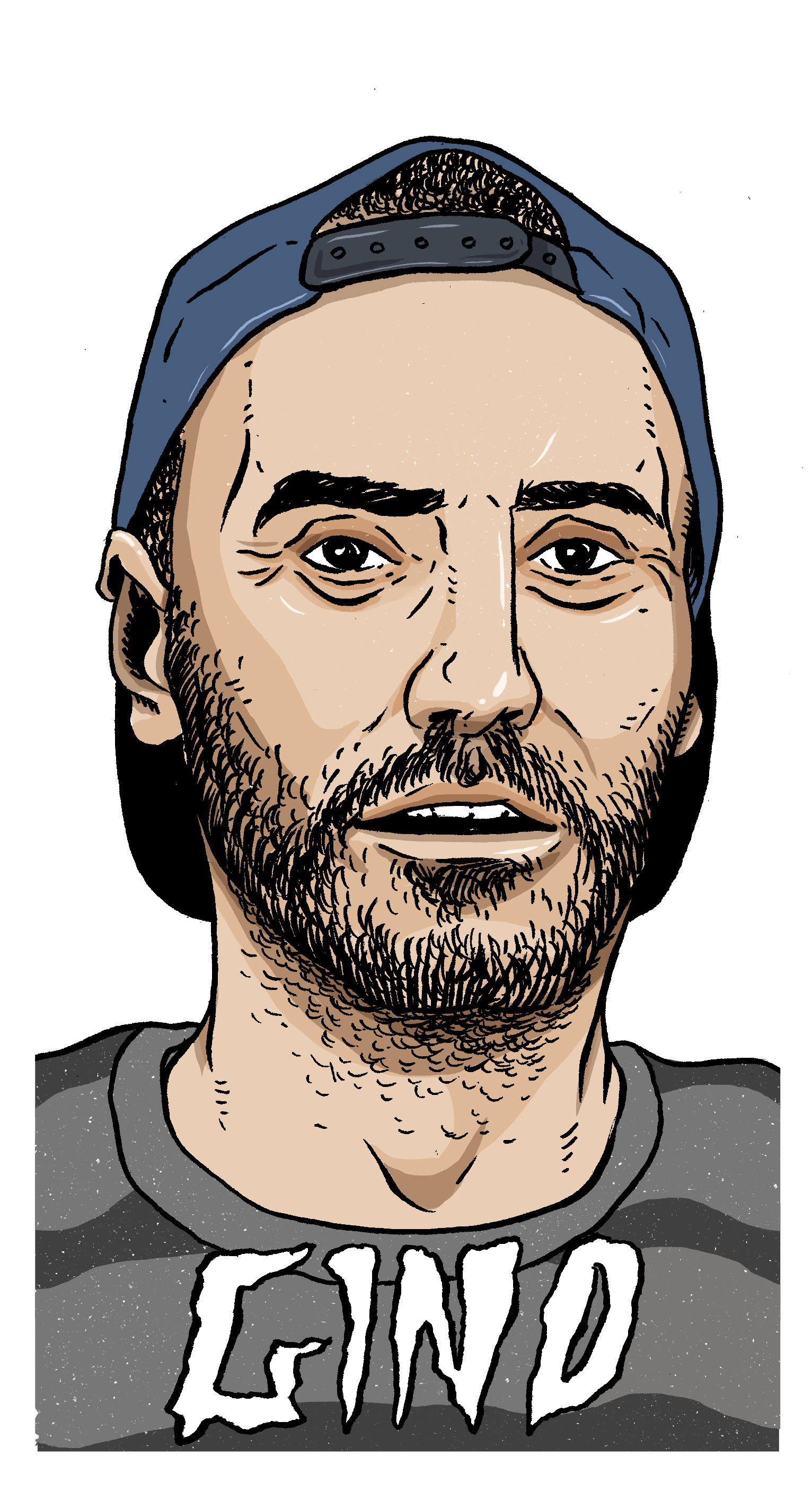 When I told my girl I was writing a piece on Gino Iannucci, she replied, “that’s easy – just write that he’s the only person you love more than me.” Although not strictly true (I love them both equally), like many in my generation, I have been more than slightly obsessed with the reclusive Long Islander for almost as long as I’ve been skating. This probably baffles many skaters born after 1990 (who were 3 when Gino’s breakthrough section came out on 101’s ‘Snuff’). After all, his last genuinely full part (in ‘Yeah Right’) is now 11 years’ old. But the internet goes wild for every handful of tricks, short ad or interview. Despite Slap message board assholes furiously typing accusations of ‘milking it’ and speculating retirement for as long as the Slap website has had a message board, Gino fans don’t give two shits about the frequency of footage.

Followers of first and second gen Girl/Chocolate are well used to the super cool dudes – Keenan, Chico, Gino, Scott Johnston, Chris Roberts – only releasing a small amount of footage at a time, often a few tricks in a shared section. Rather than feeling short changed, the years between each sighting just added to the mystique – helped by the fact that the quality would always be game changing. Things have changed – now if we don’t see a full part from our favourite pro each year alongside constant web clips, social media traffic and interviews, we scream like spoilt children. Gino is cut from a different cloth: giving interviews relatively rarely, keeping a low profile on social media, and seemingly unaware of the esteem in which he is held. 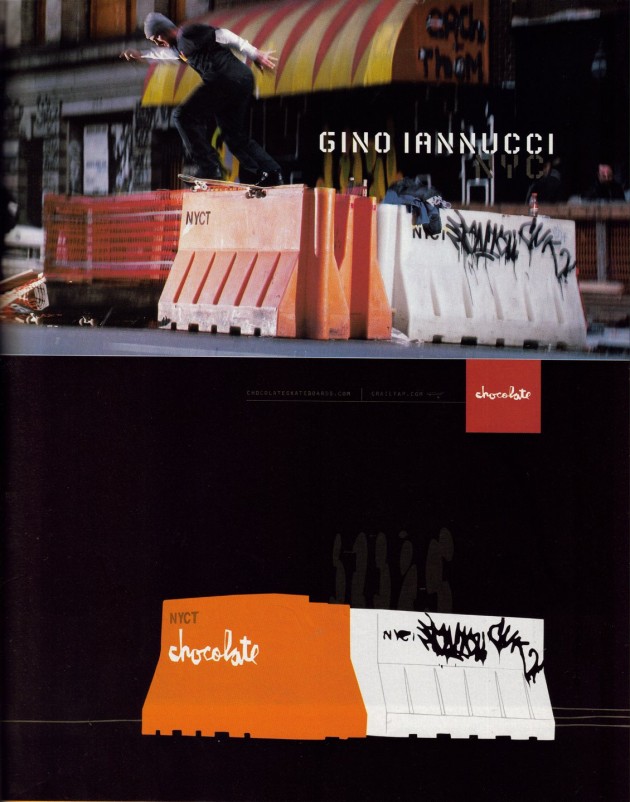 For those unsure why the jump from Chocolate to Dill and A.V.E.’s Fucking Awesome is such a big deal, and why dudes in their 30s far away from the North American East Coast leapt from excitement to trepidation and back again, let’s break it down with a bit of a personal story. Sorry…. not sorry. It’s my post…. I’ll do a ‘Gino and me’ if I want to.

I started skating in 1996 – the year ‘Trilogy’ and ‘Mouse’ came out – but it took about a year to see either, given high speed internet connections were the sole preserve of the military, and supply chains to local shops were haphazard at best. So by the time I watched Gino’s incredible part in the 101 opening section of Trilogy, then his shared part with Keenan in Mouse, I’d transcended from the grom stage of ‘all skating is amazing’ to forming a view of the sub-species I’d seek to emulate. As Quartersnacks have noted – if you were a suburban white guy, Keenan and Kareem were a level of super cool that was inaccessible: you’d never be like them. But Gino looked like a better dressed, much better skating version of you. When The Chocolate Tour followed in 1999 – and you already thought the Girl/Choc guys were the dopest people on earth (except maybe the Mixtape-era Zooyork guys) – Gino stood apart. He didn’t arse around for Spike Jonze’s direction in any of the skits. The other guys just open a door and exclaim ‘here’s Gino’s part’… and then the GZA instrumental kicks in. In THAT L.A. schoolyard line he rocks the exact same outfit as every other skater at the time: hoody; khaki cargos; a pair of chunky Axions…. but somehow looked a million times cooler than any of us. I went to Rollersnakes the next day and then had to live off stolen bread from my housemates for the next 3 months.

You could say that the majority of this reflection is about outfit choice…and that you’re above such shallow shit. But you’ve come to the disco buddy, you might as well dance. We’ll get to the skating in a minute. Whenever I walk into a clothing store, a mental voice urges me to purchase the XXLest of t-shirts, preferably with an all-over print of mostly dead rappers, baggy-ass track pants or light-ass-denims. I have a professional job. I’ve just left my middle 30s. Luckily, a louder voice sternly asks “what would Gino do?” This now-automatic reflex has saved both my marriage and ability to progress quasi-successfully within wider society.

2014 Gino is the sartorial benchmark for the older hip hop white guy (thanks to Frozen in Carbonite for popularising that label, I’m taking that to the grave). After muddying up Nike vs. core skate shoe allegiances a full decade before Nike SB emerged, rocking indoor football shoes and thus encouraging bourgeois gangsters in Nottingham to do the same, Gino shows us that we can be fresh post-35… without looking like an accountant with expendable income and a fetish for gaudy streetwear collaborations. Understated, low on daft logos, fashion-forward. Football Ts. Beanies that perch all funny on the top of your head. The return of bucket hats. The East Coast beard. Gino had a large role in bringing these things about. Because, for whatever reason, when he rocks something a big part of the skate world takes notice and follows suit. I mean, just check out that Seaport line in the Pretty Sweet bonus footage/Brick Harbour remix…we never need to worry about wardrobe strategy again.

Serious skate stuff now. Not that the above isn’t… I’m not even half joking. Marc Johnson, among others, has summarised the essence of what makes Gino’s skating stand above the rest. Natural with a slight awkwardness – see how upright he stands on his board. No over-steez on the landing, not ever. Super fast. For a guy who came up in the mid-90s, when so many others did the foot-drag push to maintain pedestrian speeds, he really hacks at it. Still does. As Brits we can appreciate that he skates cutty East Coast spots as much as Californian schoolyards. But unlike an army of high-water-and-Vans contemporary try-hards, over-steezing ollies and mobbed kickflips, when he hits up rough spots he invariably does really difficult tricks. When it’s switch, it looks switch: that 90s belligerence when doing something ground-breaking, but pulled off with understated ease. And of course, the trick selection. Gino is one of the few people who can single handedly bring a trick into fashion – even when it’s thrown out seemingly as an afterthought in a shared part or web clip. No-complies to tailslide: Gino and Pontus get shared credit for that one. But the 360 shove-it, previously an early 90s flatground stinker, now executed with pop and over obstacles; the fakie varial flip; backside 360 ollies in lines or to manny; backside heelflip as good as the kickflip equivalent. The credit for the contemporary popularity of all of these lies with Gino alone – someone who hasn’t released more than a smattering of footage every couple of years for a decade. 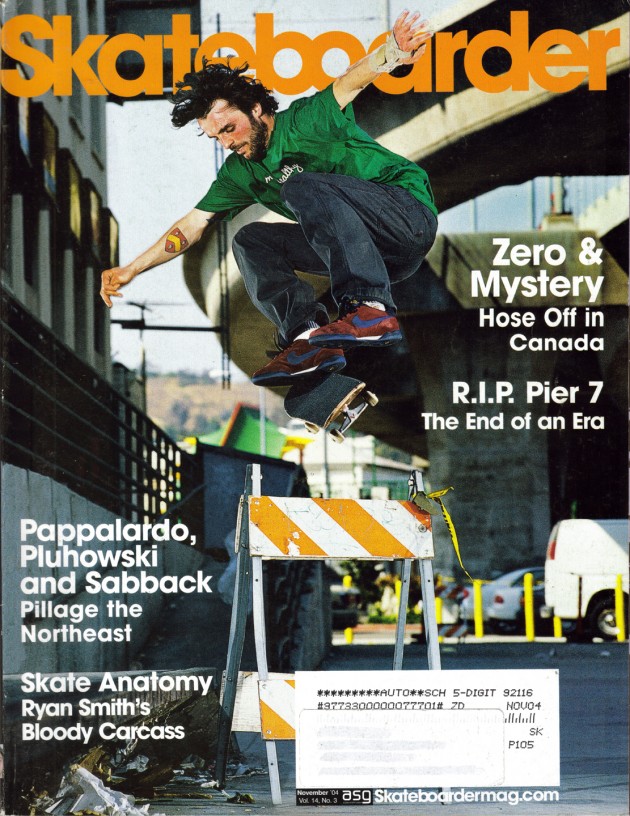 Of course it doesn’t take a genius to observe that our man is getting older. But we’ve seen a number of big names indefinitely extend their relevance by changing up the way they skate. Both booze-addled crazy man Freddy Gall and our own Paul Shier have switched from precise high speed ledge tech to something looser and more creative after years of ankle injuries. This concern is largely irrelevant for Gino. His career has been a process of constant change and reinvention – no two video parts have been remotely the same. There’s always a new group of tricks, just ahead of the curve – the low-impact curve maybe – but a change in theme that then affects the way the rest of us skate. Even if we don’t see a full section in the next F.A. release, it’s worth betting money that Gino will bring something new to the table.

Finally, why is his departure from Chocolate in particular a big deal? Many in the UK have followed the careers of Gino, Keenan, Scott Johnston, etc. with a certain sense of pride or at least association. These dudes went over to the hallowed, sun-blessed land of California and tore shit up with much the same set of values as British skaters: skate fast; try hard; make-do; be true to your origins. That Chocolate became a home for a bunch of East Coast émigrés gave it a special place in our hearts. Its importance increased as O.G. Zoo York turned to shit, and even more so as Blueprint and Alien died their recent horrible deaths. Chocolate literally became the only brand that I have followed solidly since starting skating. And the visual language of the brand – Evan Hecox’s lettering, street scenes and portraits – were/are almost as important as the skating. Either side of the wedding photograph in our living room hangs Keenan’s street scene and Gino’s 15 years’ of Chocolate Brooklyn Bridge boards. It’s hard not to worry that the resonance of Gino’s skating will lose something when detached from that unmistakable graphic prism. F.A. is pretty cool n’all, but it still seems fledgling – its popularity currently due more to the prominence of F.A. kids and Dill in ‘Cherry’, and its wider association with Supreme, than to a body of work that stands apart on its own. Although Dill reminds us that the clothing brand has been going for years, it’s early days for the hard goods and skate team. For Gino fans, the dead cert of Chocolate has been replaced with something more fragile.

I’m an optimist, and at the end of the day want to see more Gino footage – especially footage that stands out for the aesthetic appeal of the skating, rather than the technical feat of its digital capture or verve of one’s drone piloting. Like everyone else and their dog, I’m excited by the wider narrative of smaller brands coming up and re-asserting skaters in the presentation of the art form, and fighting back against the encroaching values of mainstream competitive sports. Despite clearly being a committed professional who places high standards on himself – Gino is a million miles away from Street League. Perhaps a growing, independent brand will let him – alongside Dill and A.V.E – remain relevant for many more years.

Dill better not blow it: I’ll be in the queue to make him eat that fucking vest if he does. 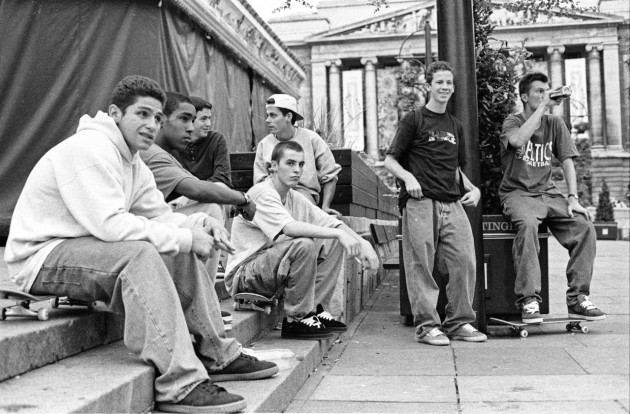