Photos thanks to Lex Kembery

Every year there are characters out there who give their all to our beloved skate scene. I’m talking about the characters that our scene cannot live without. The hardened, the driven few who have chosen their paths to document what goes down. The dedicated who barely get a chance to actually skate themselves all year round.

If there was one person this year who surpassed this level of commitment in skateboard filming, we would surely all be on the same page with the results. Henry Edwards-Wood has spent most of this year either searching for new spots, gazing through a viewfinder, pushing hard to keep up with the mandem rolling in front of him or sat in front of the computer, cutting up footage and meeting deadlines. His video edits this year have captured the true essence of skateboarding, fueled by a desire to document speed and free flowing skating that we all feel when we push down the street.

A combination of Henry’s imperturbable demeanor and a passion to make honest films has led to his work being recognised worldwide even more this year, so it’s a pleasure to award 2011’s contribution to filming single handedly to Hold Tight Henry who also managed to find time to make an exclusive ‘All Stars’ video edit for this feature.

It’s been a busy one but was there a personal highlight from 2011 that comes to mind overall?

I don’t think I can really narrow it down to one. The main highlight for me was going fully freelance, leaving Kingpin and getting to work with some amazing skateboarders from all different corners of the world who I’m totally stoked on. Creating videos was also the highlight.

Before we go any further we should drop this Best of 2011 edit that you have put together as I’m sure our readers are probably wondering who’s in it….

This edit features footage from some of my favourite projects I worked on over the last year and documents the people I think smashed it the most, or at least are my personal favourites to watch. One of the best things about my job is I get to work with my favourite skaters, whether it’s London locals like Lucien, Rory and Tanner or living legends like the Gonz and Lucas. These are my personal favourite clips of those guys based on their aesthetics or just undeniable dopeness!

Was there a specific skate trip that you were on board to film that stood out the most?

I would have to say the Converse x Grey European road trip. It’s the longest trip I have been on to date and was made by having such a great crew on board. I managed to see so much of Europe I would probably have never seen otherwise. Two weeks in a van could drive anyone against each other but we just had the best time and produced a phenomenal amount of high quality footage. Harry Lintell blew my mind on a daily basis. Ches bossed it the whole way. Rory smashed it as did Charlie and Phil, it was just the funnest time with the most rewarding end product.

I think that would be the ‘One Week in Paris’ edit with Tanner. It came out way better then we imagined when we got on the Eurostar to Paris. It was a combination of finding that perfect tune, having great footage and of course Tanner’s undeniable flare on a board. I think I like it the most because I got the balance between making an edit that features pure street skating and also appealed to a wider audience. A lot of people tell me their Mum’s love that edit, which is funny but amazing!

I’m pretty sure that quote will end up on a t-shirt mate! Haha! So what about tunes as they hard to clear, but obviously make video edits come to life. Has there been a specific song you felt that worked best from one of the edits that you have out together in 2011?

Yes, that would be this one. ‘I C Sky’ by The Shutes. I used it on the Uncommon Places video for Rory’s section. I shot a music video for them earlier in the year on the Isle of White where they record and they gave me their unreleased album and that track was on it. Their sound was fresh and powerful and I instantly wanted to make an epic section with it. 2 months later, the opportunity presented itself. The best part is that the band are stoked on skating, some of them used to skate themselves, they came to the premiere and were super stoked.

What about other people’s edits, any music you personally thought worked really well for their footage?

Lev always smashes it music wise. The Palace NY and Battle of Normandy edits had banging soundtracks but I couldn’t pin it down to one.

It must be frustration to get footage filmed for promos sometimes, what trick was the most torturous to film?

Tanner’s last 2 tricks in the Cliché Flow part we did at the beginning of the year were probably the most painful for me. It was the day before we needed to finish it. It was early January, so bloody cold and I was super ill. He was battling with this boat ledge that went into a wall and he got a switch 180 5.0 revert into it which took a while. I was delirious with the cold and could barely speak – just so ill. I thought we were done but he wanted to try a backside 180 nose grind revert, which I know is a trick he’d never even done on a ledge before. It was another hour of struggling in the cold with busy traffic but we got there in the end! That was an ordeal! 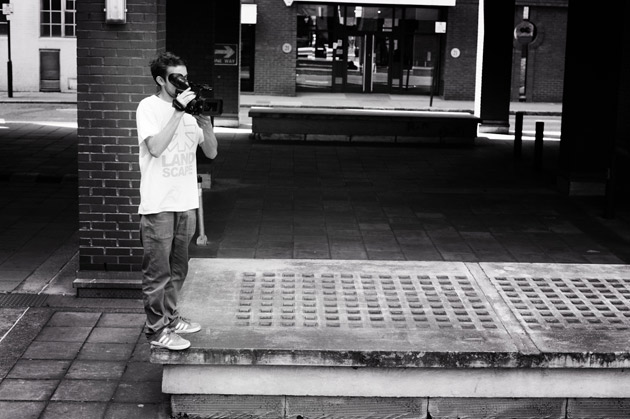 Did you have a specific ‘”shit, I wasn’t recording” moment that springs to mind?

Touch wood haven’t really had one yet. I try to never miss anything. Usually I get them when something funny happens and or someone does something really funny when they aren’t trying the trick so I’m not recording. I love all the funny stuff that happens when your out so I’m gutted when I miss random occurrences.

So on that note, what made you laugh your ass off the most whilst out filming?

So much stuff happens when your out on the streets. I guess making the Stella Supply Co. promo was the funniest project. The Karim security beef had me in tears but everything about that project was fun and there’s a lot of clips in there that make me laugh. It’s just always fun when your with a good crew. 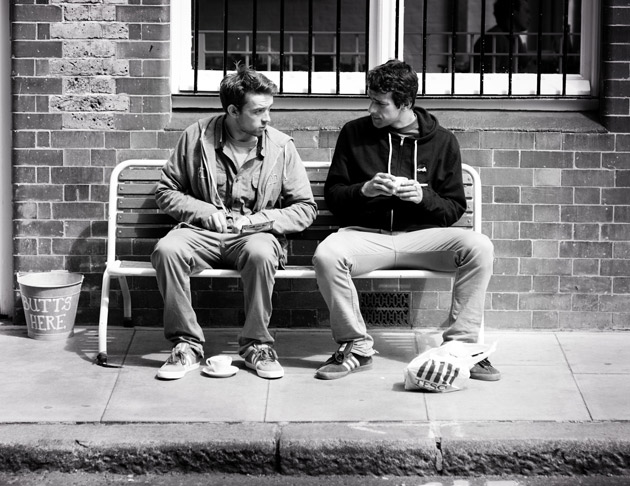 The internet gets it out there in everyone’s faces almost instantly. You can get great feedback by seeing the views and comments. There’s also minimal production costs and no waiting for a DVD to get duped, plus you can show people on the other side of the world what’s happening in your scene.

Quality control seems to go out of the window. A lot of stuff gets put out that lacks any real substance. What’s hot one day is gone tomorrow, people seem more interested with the quantity of content they put out then how impacting it is. Also with the almost instant turn around, spots and tricks in long term projects can get blown out by some web edit, its getting harder to sit on footage for bigger projects

I’m ashamed to say I haven’t seen any this year. Not by choice but I have just been so busy working on my stuff that I haven’t got round to getting copies of them. As soon as I finish the Slam Video I’m gonna catch up. I especially wanna see Pusherman from Manchester plus a load of others out of Sheffield and London.

What about company videos?

Out of all of the videos that have dropped online this year, what’s in your top 3?

1. Neil Smith’s pro part. I couldn’t wait for this to come out as I knew it was going to be ridiculous and I wasn’t disappointed. Smith is probably the gnarliest bastard in English skating but not in the most obvious way, the spots he skates in this part are rough as hell.

2. Brian Delatore – Welcome To Habitat part. I don’t really have to say much about this, it’s raw as fuck. He’s one of my favourite guys to watch from the other side of the pond. So raw, so fast and very well done.

3. Tom Knox – Blueprint/Emerica promo. Another great English part that probably opened a few eyes this year. Having seen Tom from being a little skate rat years ago to bossing it like a man, I wasn’t that surprised as I knew how good he’d got, but it was great to watch and obviously very well produced too.

Who is your UK Skater of the Year?

Harry Lintell. Everyone knows by now, dude is next level. I got to see a lot of it close up. Kids the future.

Watch the trailer here and look out for premiere details in the New Year.