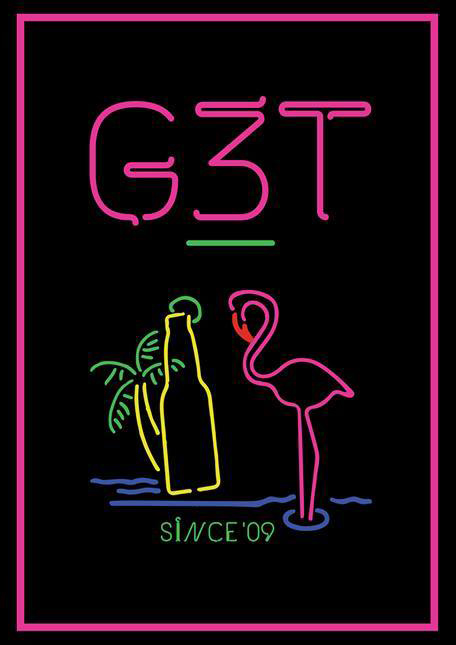 Last Friday I found myself packed into a skatepark full of skateboarders drinking and cheering to the third installment from the Get Lesta crew. It was the premiere of Callun Loomes’ ‘G3T’,  his new DVD, released this week, that packs in over an hour of great skating featuring a number of heavy hitters from across the Midlands.

Following a lively intro montage fueled by Eddie Murphy’s ‘Party All The Time’ tune, James Bush kicks off the show in style with the first part and unless you’ve been living under a rock for the last few years, this should come as no surprise. The brilliant eighties soundtrack fits perfectly with his questionably good dance moves and incredible technical skating and great pace. Without giving away too much, Bush executes perfect nollie late flips, ghetto birds and switch front boards (on handrails) – but nothing can prepare you for his ender which can only be described as an absolute banger. The baton is then passes over to Eric Thomas, who doesn’t slow down. Eric graces us with tricks on huge hubbas and wall tight handrails but also ticks all the other boxes with his fast and raw style to heighten the hype.

Coventry’s Lucas Healey continues the rampage. The inclusion of bowl footage really emphasises his ability to skate anything and everything. A highlight trick was the nollie late flip 180 – a trick not typically seen. At eighteen he is definitely one to watch for the future. Next up is Mike Simmons, a key component of the Leicester skate scene who brings perfectly executed frontside 360’s and heelflip variations to another solid part. He is, perhaps, one of the few skaters that can actually make an airwalk look great, especially across big gaps.

Midlands’ finest, Kris Vile, once again delivers another top quality part. Well and truly cemented into the British skate scene, he shows no signs of taking his foot off the pedal – and why would he? Blessing us with switch crooks on handrails and stupidly big gaps, Vile’s sick ender leads nicely into Matt Clarke‘s footage and left everyone in the premiere with a smile on their face. Everyone knows that Clarke kills it behind the camera, however, when put on the other side of the lens, he lays down some amazing stuff to deliver a solid part. Victoria park locals, Shehzad Jaffer and Shumba King have a joint section that’s nothing short of stylish, followed by Will Golding, who reminds us that his technical skating knows no limits and can be executed in any stance.

The friends montage includes a a few of the Milk team but also draws attention to local home-brewed talent such as Finley Kirkby and Jim Spencer. There are plenty more faces featured here too, reminding us just how far the Get Lesta crew has expanded and remained as tight as ever.

Kelley Dawson and Luke McManus also share a part as their finessed style certainly compliments each other well. Powerhouse,  Joe Marks (fresh out of the gym) gets straight down to business, popping beautifully high nollies and switch ollies over and down anything in his path. The penultimate part goes to Mark Stern, but I don’t want to drop any spoilers apart from that he has filmed the most legit inward heel manny you’ll probably ever see – it doesn’t even scratch the surface of how good his part is.

Curtains were always going to be saved for something special and Charlie Munro stepped up to the challenge across two songs-worth of pure Munro destruction. Effortlessly nollie-ing onto handrails, Charlie’s casual but precise lines ends G3T with footage that can be simply described as mind-blowing.

Get Lesta’s latest production is a true independent skateboard video that won’t even take up a spot in your skate DVD collection –  as it’ll be playing on repeat for ages. It’s also most likely give you a strong urge to leave your front door for a skate too. It’s out now on DVD in your local skate shop or order it online for about £10. You will not regret it.