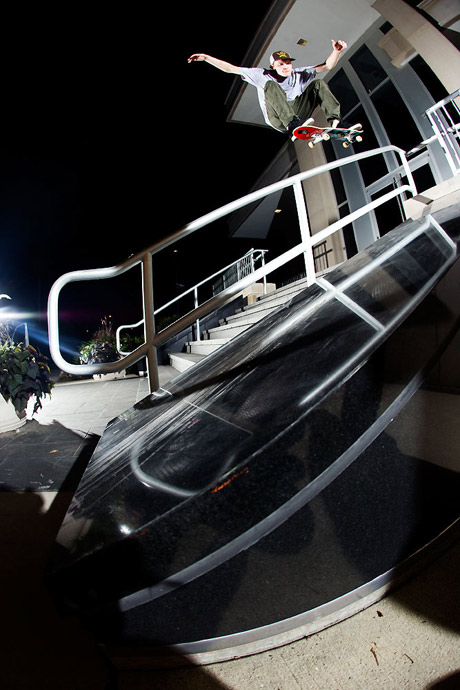 Coming from Ohio where the winters are cold and wet, Kevin Terpening has traded his sheepskin and rabbit fur ear warmers for a tee shirt and shorts and moved to LA to get what he wanted in life, sponsorship and freedom to continue his motivation to skate all day and do nothing else.

Hooked up on Alien Workshop and éS this year, it’s all looking rosy for the dude that could well be the most siked bloke to ever grace this zine. Read on to find out why.

Not much. Hanging out in the nice Californian weather.

Kept it pretty mellow. Just had some friends over and drank some beers.

You had a pretty good year on the board last year as the companies flowing you stuff recognised and made it all official… and now you’re on Alien Workshop proper. That’s gotta be a good start to a year right? Tell us how that all came together…

Alien has hooked me up for a long time and its always been my favorite company so I’m definitely siked. I think they seen some of the stuff we’ve done with éS and some videos and coverage and they were siked. It all came together at once. I’m siked to just keep it going this year and do more.

The Ohio collection must be sick, getting repped by a globally recognised company based in your hometown. Take us on a verbal journey back in time if you will… what was it like growing up skating there? Who got you into skating and what spots would you hit up?

I’m from a pretty small town that doesn’t have much to skate and has no skate scene whatsoever. My brother had been a skater growing up in the 80s and when I was around 10 he started skating again. I got siked on it and started rolling around with him and finally got my own board. He built a mini-ramp in our backyard and that’s what I learned to skate on. After that I built boxes and flatbars with my friends and we’d pretty much just skate in the driveway all day.

Do you miss it now that you live in California?

Yes. I think about it almost everyday. I can’t wait to go back in the spring.

Who set you up for that move and who were you living with to start off?

I graduated high school and went and visited my friend, Scott, in LA. He asked me if I wanted to get a job at val surf where he worked. I filled out an application and went home to Ohio. He called me and said they wanted to hire me so I moved in with him a few weeks later.

The idea is a little alien to us in the UK as our concentration of skating from the US is pretty evenly spread from coast to coast…but, like Kalis said on Quartersnacks, there seems to be this unwritten demand that skaters do their thing in Southern Cali. How much truth is there to this? Did you feel any pressure to move or was it strictly personal business?

I think it just makes it a little easier. The weather is amazing and there are tons of filmers/photographers. All the companies are here for the most part as well. People live in the middle of nowhere and still can skate and get coverage though. It’s not mandatory to live in California, I personally never moved to LA to just try to make it in skating. I wanted to move out of my situation in Ohio and do something new. I knew that it would be a little easier to make it in LA though. It’s funny, when I moved to LA and seen how things were, I didn’t really want to be a sponsored skater anymore. 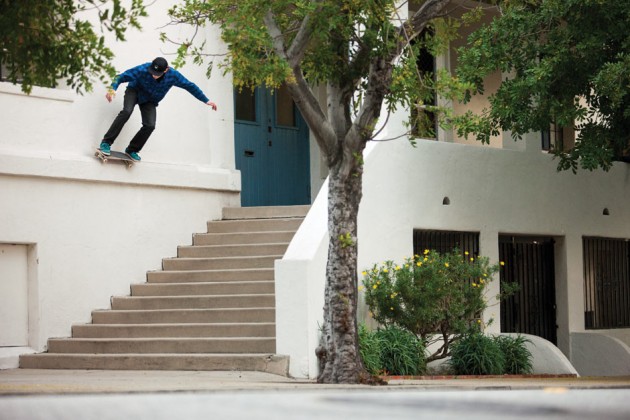 NO more Cody stories. I love him.

I find it hard to imagine why you were kept flow for so long, especially after making the move and getting amongst it Cali. What were you doing other than skating to keep your head up?

Try to stay busy and work to pay bills and rent. I was lucky I had a lot of my friends from Ohio around to keep me happy. I was always just siked to be in LA and skating all around the city and taking buses. It was all so new to me.

I read a great little story in Skateboarder Mag about how you used to use the paper inside éS Shoes for toilet tissue… when they put you on fully did they give you some nicer paper or had you already grown accustomed to that crinkly stuff?

Haha! No but when I went to Sole Tech once, Rob Brink stole some toilet paper from the bathroom for my house!

Have you reached the point where you can wipe with your paycheck yet or is that a pleasure reserved only for those with a pro shoe?

Fuck no. I’m doing pretty good so I’m siked. I’m not rich though. 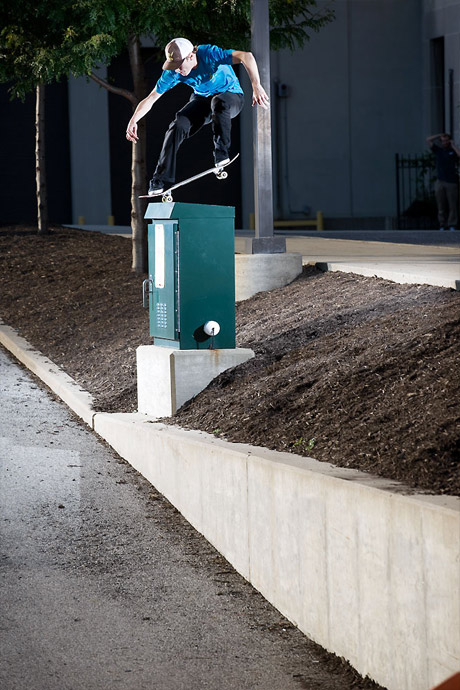 You’ve been in discussions with the designers at éS to make sure everything you rock is perfect right? Ever considered getting on a proper design tip and earning some dough? That’s like one step in the direction of completing skateboarding…

Things don’t have to be perfect. I just want things to fit right because it can be hard to find the right stuff sometimes. I’ll let the designers do the work though. I probably would fuck everything up!

So what have you got planned for this year? Any upcoming trips or edits to film for?

Just starting to film for an Alien Workshop project. Its early in the making but its gonna be rad. My friend Benny is filming for them now and he kills it so I’m siked.

That may be one of the first few times I’ve ever asked someone if they were filming for an ‘edit’ instead of a part in a video. What’s your view on the direction skate media is heading in?

I don’t know man. It is what it is. I don’t want to get to into it. I just want to film and skate with my friends and have a good time. People just want too much, too fast and that makes everything less quality. There’s also an overload of certain skaters.

Most, if not all the footage I’ve seen of you has been featured in online edits, with so many of them around it kind of leaves us lurkers in search of some radness a little over-satisfied, jaded and forgetful. Your éS Welcome Part was a total banger though… do you go out of your way to make your skating interesting or do you just skate how you want to skate and hope for the best?

I just try to skate what I’m siked on at the time. Some stuff you really think about and some stuff just happens. Sometimes you get burnt and just want to do fun shit. That’s where bean plants and shit come in handy!

Who out there in the US should we in the UK be paying attention to right now or expect to see great things from in 2011?

I’m not too sure haha! Stevie Perez is sick. He’s an éS flow rider. I’d like to see him come up.

What’s currently rocking your playlist the most?

I’ve been listening to the Minutemen a LOT.

Can you tell us of one specific moment in time, where everything is clicking and there is that moment of unparalleled clarity where you think ‘man, skateboarding is fucking rad’?

Me and Bobby (Worrest) skated the quarter pipe in my backyard for like two hours learning tricks the other night. It felt like were little kids again just siked to skate and learn shit. We got sparked. I guess just those days where you just get siked like you did when you were younger is what keeps me going.

Watch Kevin do exactly that here: