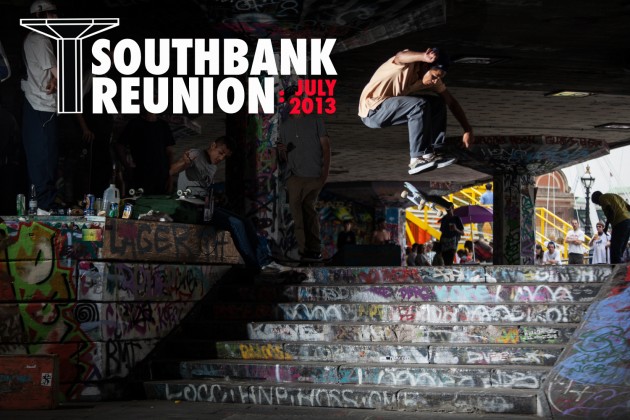 “Southbank was the first place I skated out side my local area. The noise that resonated around the brutalist architecture of the Undercroft will always remain with me, as does a sense of speed. Folk would whizz by over the hip and up the wall ride and back up the small banks in the long demolished area that now houses a Beano exhibition. The sound is irreplacable even to this day. I made friends there for life, picked up the sense of anarchy, seen pure creativity at the likes of the Smell of Death comps and many other sessions that went down there. All of these memories need to be preserved.

I was super stoked to hear Ben Simmons had organised a reunion, which was one not just about the people, but also about the the spirit of the Undercroft. That feeling, that sentiment was shared by all who attended. It was great to see the so many faces too, from the original 70s slalom heads, to the 80s boneless ones, the 90s big pants/small wheels brigade, through to the current crop of shredders. Names such as Curtis McCann, Shane O’Brien, Barrington, Tim Leighton-Boyce, Vernon, Henry Edwards-Wood, Davross, Mike John, Elton Whybrow, Dave Barnett, Matt Gold, Reuben, Shanks, Luke Hunt and Tony Luckhurst to name but a few from my era were all in attendance, all wearing smiles upon their faces.

Skateboarding must be the single continued cultural activity on site daily at SBC surely? I bet that not a day has gone by without urethane rolling on those angled banks – can the same be said of music, dance and art? Thesedays I work in the arts sector. I value and support a diverse range of art forms and realise how hard it is to get money together. I love Southbank Centre first because of the Undercroft, and secondly because of the artists and creativity that the centre as a whole supports and promotes. It is saddening that SBC’s has approached this situation in such a wrong way, let’s hope going forward they listen to the masses as they re-evaluate their plans.” – Gorm.

Find out more about the Long Live Southbank movement at www.llsb.com. 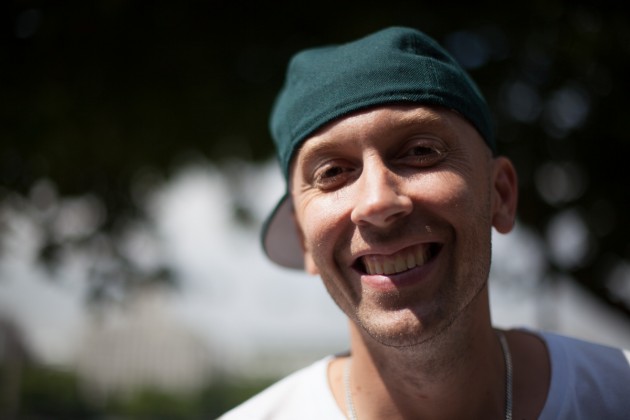 “Basically living in Sweden these days made me miss The Southbank and the old lads and gave me the drive to put together a Reunion making certain that if this was our last skate at the Banks then we could at least session the place together for the last time. The turn out was legendary! Unfortunately some people didn’t make it such as Paul Stylianou who helped get the ball rolling. Sam Silverstone should have been there too. Tom Penny and Mark Gonzales were invited but I guess they were busy. The LSD crew made my day. So many smiling faces all over the place!

I have so many memories from Southbank. My favorites were probably during the early nineties just hanging out after a long days skate and freestyle battling with Ben Jobe, Fat Clive and Southbank Sam amongst many others! So much creativity has erupted out of this spot, and should they take it away, the history and memories will survive, however, the future generations will find it hard to find a place they can call home!

The funniest thing on the day for me was when King Curtis McCann was too scared to watch me skate a gap I assembled that he had to walk off and sit on his own by the Thames in shock! Haha! The LSD crew have left so much DNA on this spot. It’s mirrored all over the banks and blocks through the dirt they delivered here. It’s a magical spot that the powers to be now want to move down the river to the infamous bird-shit banks location and expect us to be grateful, to walk away and shiver. Fuck that!” 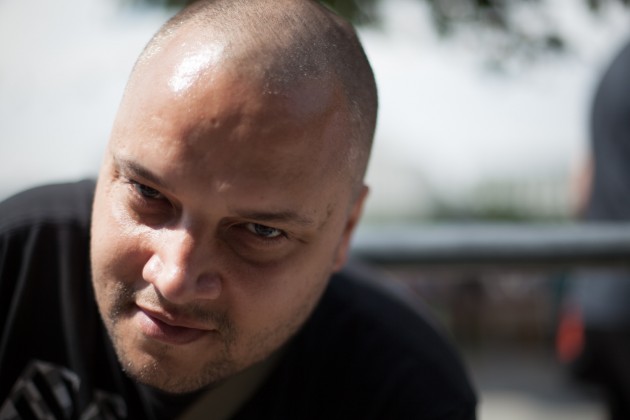 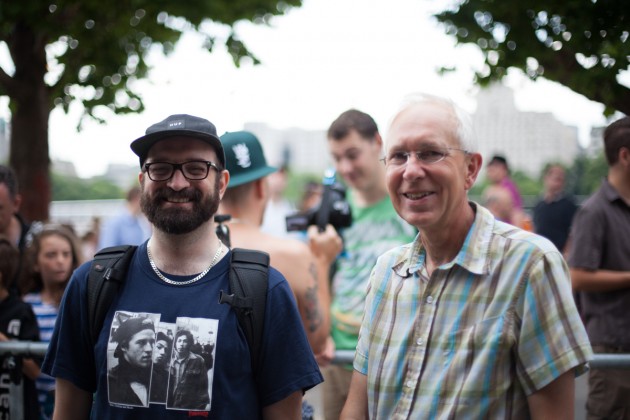 “Saturday was a great day. I was so pleased to see so many old friends – although it was a bit novel the way people from all the different eras were mixed up together. I spanned ’76 to ’93 as part of that world and in skating terms that’s several different generations e.g Simon Napper to Curtis McCann (really pleased to see both of them again).” 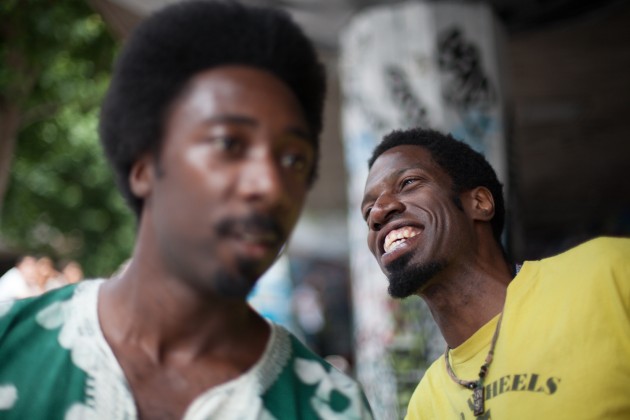 “As Harrow locals in the 80’s we were never really part of the Southbank crew, but we would often drop by the legendary spot on a wet weekend or a Sunday evening after a trip to some other distant park. It was a great place to get together and meet up when practically all the London skaters new each other. The Southbank reunion was just like that with a great atmosphere and so many faces from our generation mixed with others from newer times. Great to see those faces still getting a buzz from skateboarding. Skating moves on and evolves but the Southbank was the start of it all.

I had an interesting chat with Micheal Stride about one of the reasons behind the proposed redevelopment being an increase in diversity. We both agreed that it was tosh, as skateboarding is one of the most diverse and inclusive things anywhere. It doesn’t matter about race, ethnicity, background or wealth, as when you are on a board everyone is equal.” 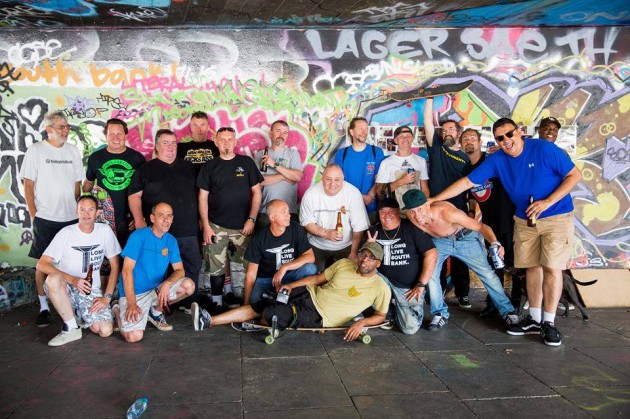 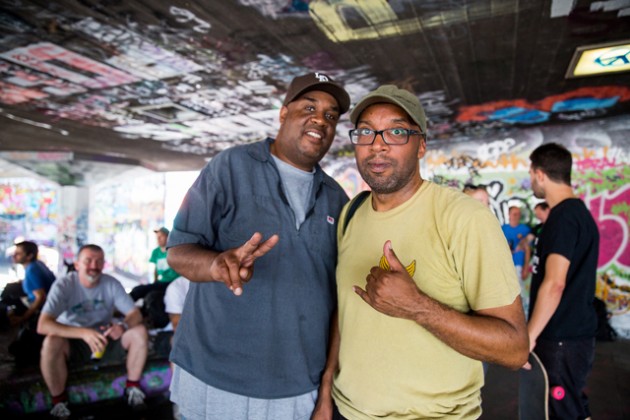 “I started skating there late 1976 after hearing about this great place that was starting to be used by skaters, when i got there i was blown away by the atmosphere and having never ridden banks before stuck to freestyle for a while. As time went by I got used to the banks and the place became home. I sometimes stayed there overnight there if I missing the last train home – tramps one side, us the other.

All races came together down there. There was no racism or segregation, just one big family going mental on boards, rollerskates or bikes. I got spotted there one day by a guy from Pacer Skateboards who asked me to represent them in the upcoming Oceanside pro-am freestyle comp in California, so with brand new boards, safety equipment, shoes and clothing it was off to the States for me as a result. (Unfortunately I didn’t place at Oceanside but had a great time.) Soon after, more sponsors came on board (G&S, Vans, Norcon, ACS Trucks). After touring Europe and Britain I was joined by the Skatewave team so it was back to the states again doing comps and demos then back to Britain where I won the British open freestyle in ’79, all due to Southbank as it all started there. Great times with great people.

Returning there last Saturday and skating it at the reunion was like a religious experience, just approaching the place with the sound of wheels going over the cracks in the slabs and the smells were enough to take me back to where it all began. I’m 50 now and have been skating again for about a month, skating the Southbank for the first time since the ’70s has changed my outlook once again. Its where my life really started and probably where it will finish. If they take away the Southbank it will be a travesty! So Mr Planner, Mr Politician and Mr Starbucks, bugger off and play somewhere else! LONG LIVE SOUTHBANK!” 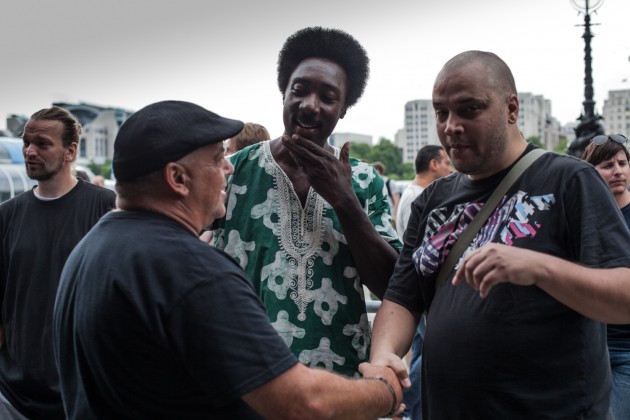 It would not have been a reunion without Ben Jobe. Ph: Derek Bremner 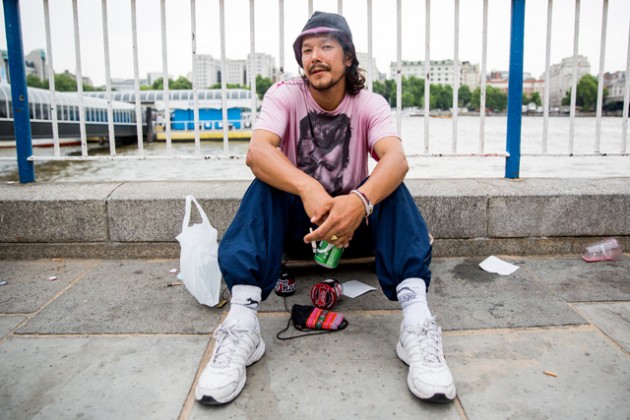 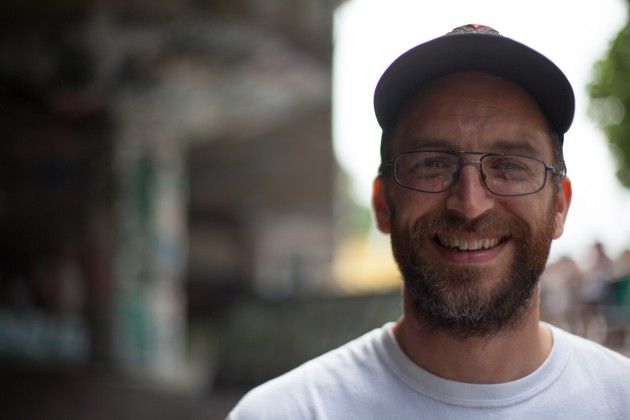 “I had my first proper skate at Southbank since the original barriers were put in at the reunion, it brought back so many happy memories of a place that shaped who I am today. Great to see some of the old faces, looking slightly rounder and greyer but essentially the same bunch of beautiful creative weirdos that I grew up with! I loved the impromptu impossible session with Winstan and Kevin and am half glad and half ashamed that I chickened out of the best trick down the seven session. My mind said yes but my knees said noooooo!! On a serious note it really saddened me to be reminded what the Southbank was like in its full glory with the small banks, the driveway and the bank to wall – still the best place to skate ever. If the powers that be really do consider the skateboarders to be part of their family then they should reinstate all the original features. Long Live South Bank.”

Luke Hunt hasn’t aged since he left SB. Davross looked 75 at 20 but still a legend of the banks and beyond. Ph: Gorm. 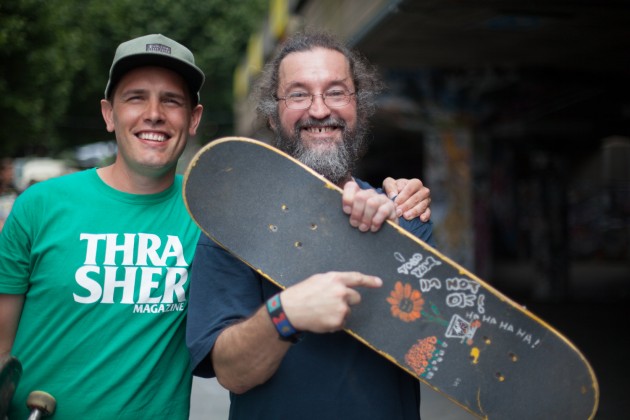 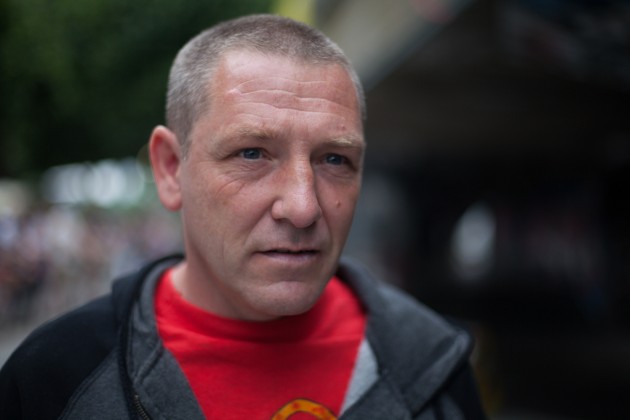 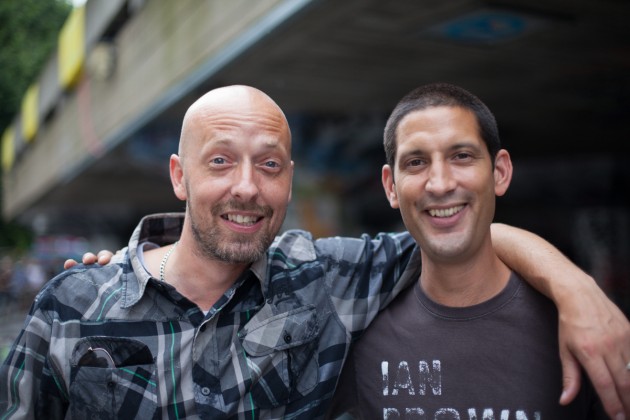 “The best time was had catching up with the Southbank locals on Saturday, some guys I had not seen for some 25 years and it kinda hard to recognise some of them at first! After missing out on the ‘Rollin’ Through The Decades’ stuff a while back I knew I had to attend this reunion hosted by the Simmons, although there were people missing!

Seeing Curtis, Ryan, Barrington, Dave Barnett (minus Danny unfortunately), Julian, Winstan, Reuben, Tim Leighton-Boyce and many others was such a throwback and a blast. It was great reminiscing on past memories. Dave’s straight to the point humour kept me laughing throughout. I only wish I had taken my plank and had a roll myself but I was at a wedding reception the night before and was still taking the edge off with a few red stripes. I will definitely be going back soon to skate those big banks and take in the atmosphere.

As to the future of Southbank? For me it has already been shitted on in a big way as the beauty of Southbank was being able to have different sessions with different groups of people all around the Undercroft. A bank to wall session then a line on the flat land area before joining a session on the big banks etc…etc..! I hope they can still save the remaining area even if it just so we can continue to have reunion’s there for many years to come.” 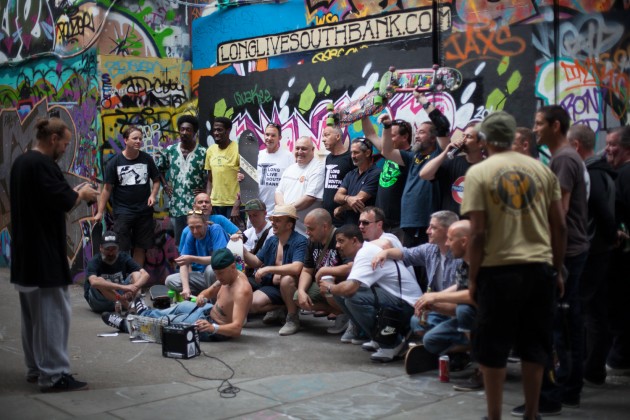 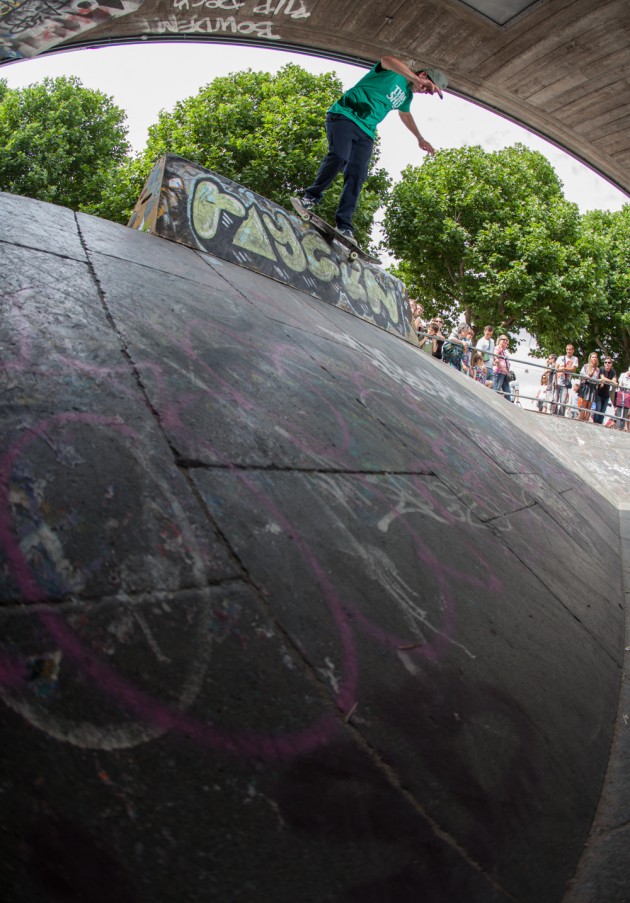 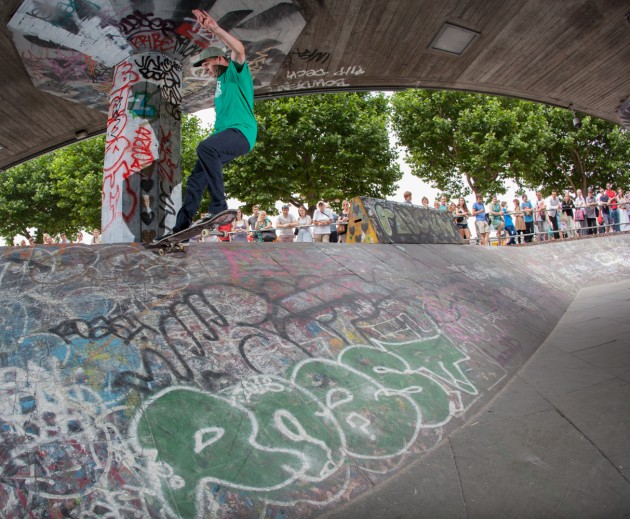 …and a sweet tailslide. 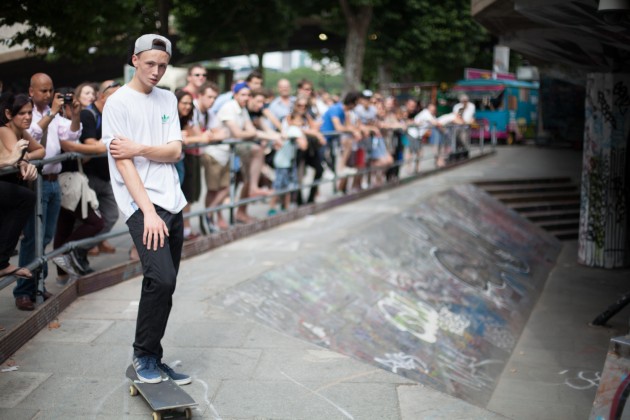 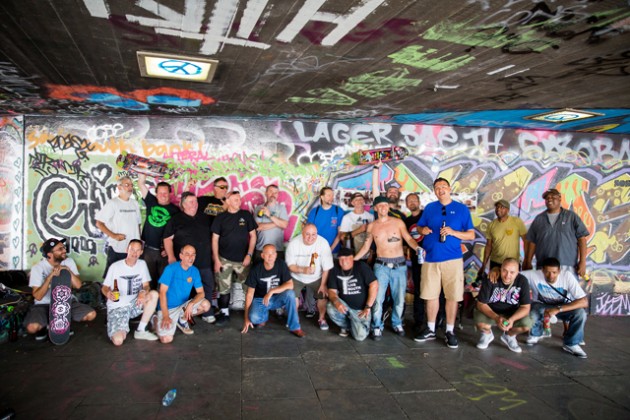 Many thanks to the photographers and everyone involved. Find more pics from this session at Gorm’s blog and look out for more of Derek Bremner‘s pics in the forthcoming Southbank book. 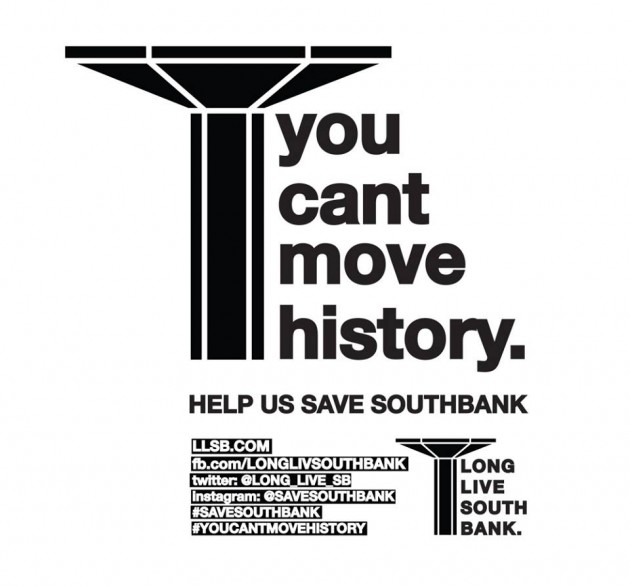