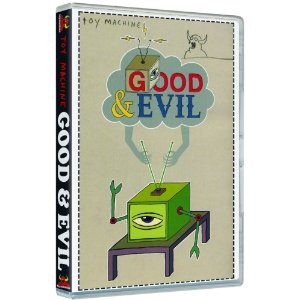 Even though I have refrained from jumping downs huge sets of stairs and long slippery rails for the last couple of years, one company is sure to spark that motivation within me again and that’s the Blood Sucking Corporation that is Toy Machine. Somehow Ed Templeton always gets the rawness and style balance correct with his videos, even if it means waiting a while and swapping endless team members… ‘Good & Evil’ takes us back to the good old days of ‘Welcome to Hell’, but doesn’t surpass the master piece that was. It comes close and here are a few reasons why: – First of all, Ed has a great sense of music and especially when it needs to be paired up with skateboarding, so expect to be pleased on that front. The master of ceremonies opens up the show and skates a lot of banks to ledge/rail spots with the usual dangly style. However, I did find that Ed’s skating wasn’t as gnarly as it has been, but I can only imagine that this is due to being caught between a million responsibilities that don’t involve riding a skateboard…
Right, the following two riders have had a lot of hype written about them so you’d expect something out of the ordinary, but honestly Josh Harmony and Austin Stephens didn’t surprise me at all. I found both of their parts rather bland and ordinary. I would say ‘sorry’, but I won’t. It’s what I saw and what I felt.

On the other hand, new team rider Johnny Layton is a great surprise. I really though this kid was nothing special apart from long feeble grinds, but then I saw his debut part in ‘G&E’. Johnny plays it cool to begin with, but then starts to show his true colours with style, pop and gnar wrapped into one. Oh, and he isn’t afraid to grab his board either which is kind of cool, too.

Weh hey! A secret rider! Well, Matt Benett won’t be a secret much longer. This innocent young buck come through with a very stylish first part that actually takes quite a lot of switch skating to the gaps and rails. His icing on the cake is a very hard (and don’t deny it!) switch backside 180 to backside smith grind down a couple of rails. Just think about that for a minute…
The man who wears a moustache like a gay porn extra steps up and annihilates rails with tech-gnar (technical and gnarly skating for those who don’t read Thrasher). Billy Marks deserves all the props he can get because whacking out kickflip frontside feebles and switch bigspin heelflip boardslides is no small feat. I don’t like Billy’s style, but nobody’s perfect, right?

Finally, the Butcher closes up shop. Diego Bucchieri is known for his fearless approach to gaps, so he does what he’s known best for and leaps everywhere. I did spot a ridiculous backside kickflip off Geoff Rowley’s bump so keep your eyes open for that! Also, he DOESN’T do Ali’s 25 set! It’s the 20 set in San Francisco that was featured in an old Thrasher video, ok? Stop speculating.

So, there you go. ‘G&E’ is a pretty good video and I won’t bother to go over the endless lists of bonus footage that include tours, art films, sponsor me tapes and friends. I will however mention the most gruesome ankle snappage I have seen in a while. It’s in there, but I won’t say where because I didn’t know until I saw it and it made me look away and thank God I don’t try any of these stunts anymore!